Five student teams were selected from a pool of applicants to pitch their idea in front of community and alumni judges at this year’s competition. On the panel of judges were Danielle McFadden, Glenn Morgan, and Stacie Hargis.

The five student teams chosen to pitch at this year’s competition were Cyborg, LoreBooks, Royal Bear Wear, SEAable, and Share the Sound. After pitching, the judges deliberated and provided feedback to each team prior to announcing the winner. 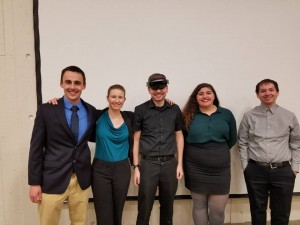 Each of the other teams, Cyborg, Royal Bear Wear, SEAable, and Share the Sound were awarded $250 each. 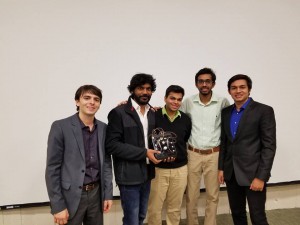 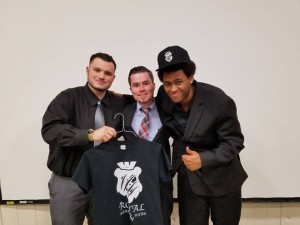 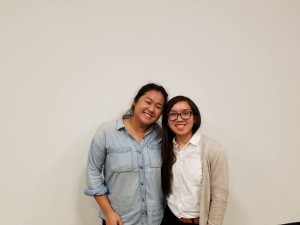 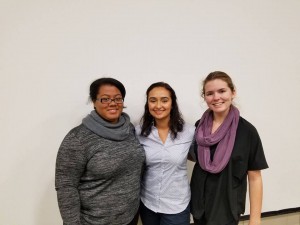 Congratulations to all participants!

We encourage any interested students to apply to the 2017 $50,000 DifferenceMaker Idea Challenge! Applications are now open and close on February 13. 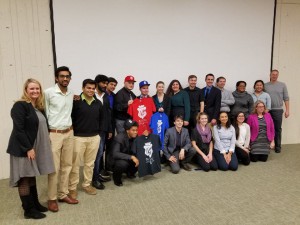 Student teams who developed prototypes over the course of the fall semester presented their projects to several alumni judges. During the preliminary round, judges visited the presentations of each team and then deliberated to decide which teams would compete in the next round where pitches were made to another panel of judges.

The 2nd place winner of $750 was Breezy with team member Anne Faber and advisor Scott Stapleton. 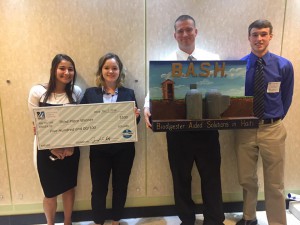 The Honorable Mention winner of $250 was a team that developed a Multi-Dose Auto-Injector!

Congratulations to all winning teams!

Also, we would like to thank all of the judges that provided their thoughtful insight and expertise!

On Thursday, December 1st, Digital Federal Credit Union and the Manning School of Business hosted the annual DCU/MSB Innovation Contest. Earlier in the semester, student teams applied to the competition with an idea they had related to banking. Over a dozen teams applied and five were selected to compete and pitch their ideas to a panel of judges. 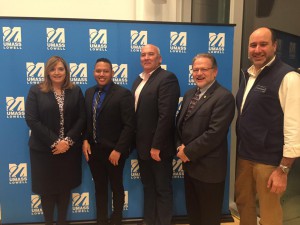 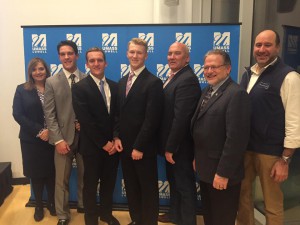 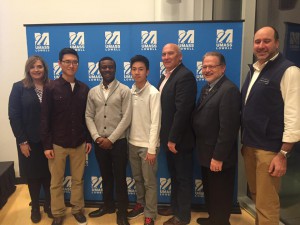 The winner of this year’s competition was team Digibank and their idea to help rid consumers and the environment of loose change by having leftover change from a transaction deposited directly into a bank account! Team members included Channou Aing, Virath Chea, Siven Hang, Cullin Lam, and Chanmary Lau. Each team member was awarded $500! 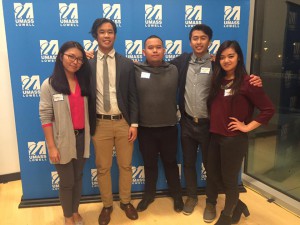 $3,700 was awarded to student teams overall! Great job to everyone who participated and congratulations to this year’s winners!

A special thank you as well to our judges! 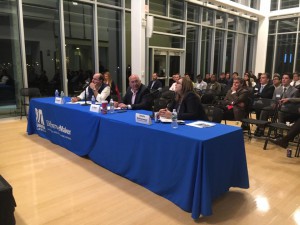 On October 25, 2016, students here at UMass Lowell had the chance to hear from 2013 Campus-Wide DifferenceMaker winner, Nonspec! Jonathan De Alderete and Erin Keaney of Nonspec spoke to students about their project and experience with the DifferenceMaker program. Nonspec was a part of the first ever DifferenceMaker Idea Challenge back in 2013 and have moved on to raise of $200,000 in their own funding after competing in the Idea Challenge.

Having the opportunity to hear from a real-life DifferenceMaker team that has had true success even after the DifferenceMaker program is a great motivation to students and we hope even more students are motivated to pursue their ideas and truly make a difference!

Students were able to speak with Holly and Ha to learn more about the DifferenceMaker program as a whole and dive into questions they may have had about entrepreneurship, innovation, and critical thinking.

Any students interested in becoming DifferenceMakers were able to learn more about the process and look forward to getting their teams together!

Thank you to everyone who attended!

Congratulations to everyone recognized for their entrepreneurial initiatives! 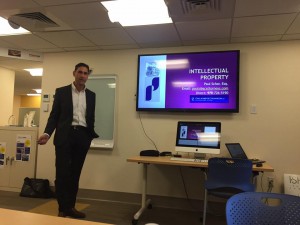 On Tuesday, October 11 in DifferenceMaker Central, attorney Paul Schor attended DifferenceMaker’s Entrepreneurship Lunch Series as a guest speaker! During the lunch, students had the opportunity to learn more about intellectual property, including patents, copyrights, trademarks, and more!

Students enjoyed salad and pizza while being challenged to think about the ways in which intellectual property affects certain circumstances in business!

Our next lunch will be on Tuesday, October 18th, from 12:00-1:00p.m. in O’Leary 103 on South Campus. Take the opportunity to stop in and meet DifferenceMaker staff, Holly Butler and Ha Pho! We hope to see you there!

Yesterday evening in the Makerspace on North Campus, DifferenceMaker held yet another exciting event during Entrepreneurship Month! 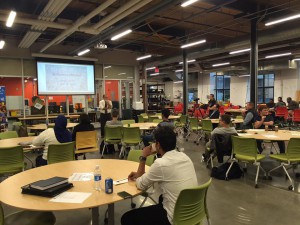 During this year’s Mixer, students and faculty heard from Professor Steven Tello as he introduced the DifferenceMaker program and kicked-off the evening. Following Professor Tello, a member of team eNABLE, Dan Whiting, gave a brief introduction of the Makerspace – a newer addition to the experiential learning here at UMass Lowell.

DifferenceMaker Program Manager, Ha Pho, then led an ice-breaker to help students get to know one another and foster collaboration. Faculty Fellow, John Morgan Bush then facilitated an open mic and speed pitching session where students with ideas could introduce them to the audience.

DifferenceMaker Program Director, Holly Butler, then wrapped up the event with thank-you’s to all of the attendees for their participation and willingness to help solve real-world problems! 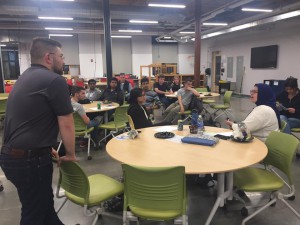 Our next event is on Tuesday, October 18th, from 12:00-1:00p.m. in O’Leary 103 on South Campus for the Entrepreneurship Lunch Series! Join us for pizza and the opportunity to meet DifferenceMaker staff, Holly Butler and Ha Pho!

Yesterday, students met in DifferenceMaker Central for some pizza during the first session of the Entrepreneurship Lunch Series! From 12-1p.m., students from many different majors took advantage of the opportunity to hear from Professors Michelle Bazin and Deb Finch about non-profit organizations and their place within the entrepreneurial world. 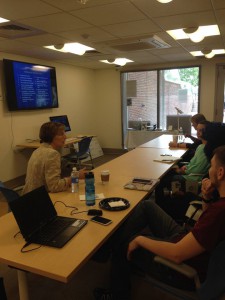 We will be holding lunches every Tuesday in October so come join us next week on October 11 in DifferenceMaker Central – Lydon Library, Suite 012! 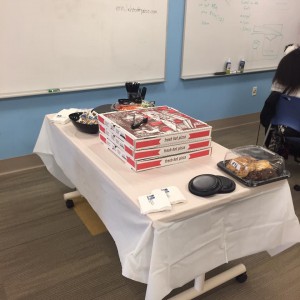 On Monday, October 3, 2016, DifferenceMaker faculty fellow and LLC (Living-Learning Community) advisor John Brown, along with Professor Steve Tello, met with students in Bourgeois Hall for an LLC event. Students gathered in the common room of the fourth floor to enjoy pizza while learning more about the DifferenceMaker program and discuss opportunities and ideas they have. 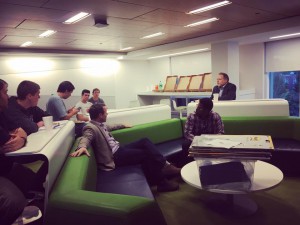