On December 6th the Francis College of Engineering Prototyping Competition was held at Perry Atrium in the Saab Center on North Campus. For the first few hours of the contest, teams were set up throughout the lobby of the building, showcasing and explaining their prototypes to the public, as well as the preliminary judges as they filtered in.

A big thank you to our preliminary judges:

The preliminary judges selected 5 teams as finalists to pitch their idea in a presentation to the panel of finalist judges. Before the pitches began, Joseph Hartman, Dean of the Francis College of Engineering, introduced the judges, and gave an overview of the format for the contest.

A big thank you to our final judges:

The first team to present was Pyramid pack consisting of Sean Roche, Brett Wadman, and Patrick Drummey Jr. Their idea was to create a weight-distribution backpack that relieved some of the strain that backpacks put on the body.

They were followed by Cameron Edmonds of Project SASS. The idea here was an automated satellite and GPS beacon that can call for help from remote locations. Project SASS was also a winner at the 2018 $50,000 Idea Challenge.

Next up was Benjamin McEvoy of Benji Ball, fresh off of his win at the Creative Venture competition the night before. Benji Ball is a game similar to wiffle ball that takes the baserunning out of it, to cater to children with disabilities, as well as make it easier to play in confined space.

The next team was yet another group presenting on back to back nights. Air Align also took part in the Creative Venture Competition the night before. This group consisted of Daniel Garfinkel, Alexander Barr, Dennon Audette, Alex Higgins, Joe McDonald, Kevin Truong, Michael Hoppe, Nick Dean, and Patrick Pang had the idea of a soft robotic suit that corrects people’s posture.

The final presentation was from Sid Iyer of EnvivoMed. His idea was creating a painless blood extraction device. 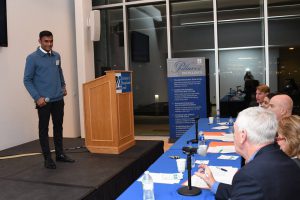 At the conclusion of the presentations, the judges gathered to determine the winners of 1st, 2nd, and 3rd place, as well as the top biomedical device prize and People’s Choice award. 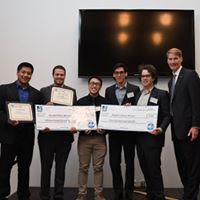 Thank you to everyone who made this event possible, and to the teams and judges. Job well done by everyone!

Last Wednesday, December 5th, the FAHSS Creative Venture Competition was held at O’Leary Library on South Campus. Six teams pitched their creative and innovative ideas to a panel of two alumni judges. The panel consisted of Keith Neal, Class of ’93 and Glenn Morgan, Class of ’86, both alumni from the College of Fine Arts, Humanities, and Social Sciences.

To begin the night, Luis Falcone, Dean of the College of Fine Arts, Humanities, and Social Sciences, introduced the judges, and thanked everyone who made the event possible. He then gave a brief overview of the format of the competition, and then the presentations ensued.

Frank Talty, Assistant Dean, emceed the competition. The first team to pitch was A New Look at Life Coaching. This team, led by Jack Travis and consisting of Josiah Gennell, and Nisarg Jhaveri, pitched their idea to help those affected by mental illness overcome the personal and financial barriers to recovery, wellness, happiness, and fulfilment in life.

The second group to present was Voter Engagement App, consisting of Emily Yormak, Brendan Clarke, Justin St Louis, and Yonatan Tsivkin. This team’s goal is to create an app with absolutely no political agenda that keeps people posted on politics, so voters can be more knowledgeable and less biased.

The next team to take the stage was Juan Boungou, and Anastasia Forcucci of Innovate Lowell. This group sought to address the lack of opportunity for underprivileged children to learn business skills by implementing them into after-school programs.

Innovate Lowell was followed by Benji Ball, presented by Benjamin McEvoy. His idea was a game similar to wiffle ball that took the baserunning out of it, to cater to children with disabilities. 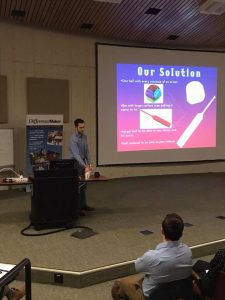 The final team to present was Magnetic Textbooks. This team consisted of Jasmine Bell, Conrad Nelson, and John Lesack and aims to prevent students from having to lug multiple large textbooks to school every day. Their product is a magnetic textbook that students can insert and remove sections of different books, based on what material they will need on that particular day.

After deliberation, the judges selected Benji Ball as the grand prize winner, winning $5,000!

There were many great ideas pitched and we all look forward to seeing the progression of each project. 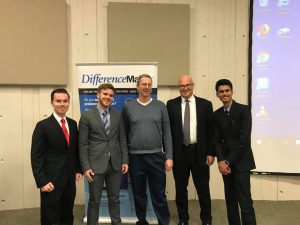 The judges posing with the New Look at Life Coaching team

A big thank you to the judges for their time, sponsorship and effort, and to everyone who came out and made this night a great success!

On Tuesday, December 4th, the DCU/Manning School of Business Innovation Contest was held in Moloney Hall at UCrossing from 6 to 9PM. Six teams competed with their innovative banking and finance ideas. Each team left with $100 per team member as a cash prize and the winning team received an additional $500 per team member. The event began with food and networking.

Once the audience was settled in, Sandra Richtermeyer, Dean of the Manning School of Business opened the event by thanking everyone who put in hard work to make this all come together. She then introduced the judges; Jim Regan, President & CEO of DCU, Michelle Silveira, Senior VP & CMO of Jeanne D’Arc Credit Union, and Vasilios Roussos, Managing Director at Fintech Innovation Center.

Once the judges were introduced, the team pitches ensued. The first team to go was Asset Tracker. Their team consisted of Chris Bradley, Michael Gergley, Jared Girourd, Zachary Palmer, and Michael Rivers. The team pitched their idea of an integrative finance app that can keep track of all of the user’s accounts and assets in one place. 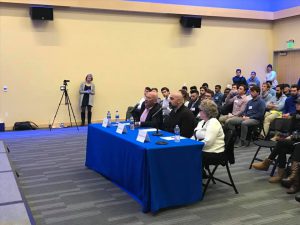 The judges listen in to the first pitch of the night.

The next group was ATM fast App by John Lesack, and Conrad Nelson. This duo pitched an app that can improve your ATM experience easier by making the majority of your transaction remotely before using an ATM, while maintaining the utmost security.

Next to the stage was Chip Away, consisting of William Hanna, George Le (2018 Idea Challenge winner), Peter Maitland, and Hannah Wright. Their idea, Chip Away, was a creative solution to helping people pay off student debt.

Finance 4 Life was the next team up. Members included Brett Battaglia, Brian Conneely, and Stephen Sarrouf. Their idea was an interactive Finance app targeted for High School and College students that taught Finance in a fun way. 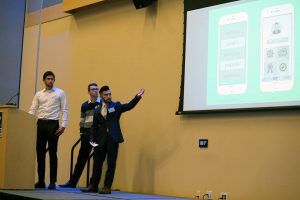 Brett from Finance 4 Life displays the layout of their app

Finance 4 Life was followed by another team with a Finance app; Proactive Student. Siddhant Iyer, and Sourabh Kulkarni demonstrated how their app would work and fielded questions from the panel of judges.

At the conclusion of the presentations, the judges exited the room to deliberate, then returned to announce their decision. The winning group was Chip Away! The team won a total of $2,400 in cash prizes.

In total, DCU awarded $3,800 to the teams at the competition. 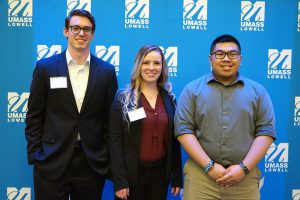 The Grand Prize winners, Chip Away

Thank you to the judges, teams, attendees, DCU and the Manning School of Business. We can’t wait to see how these innovative ideas develop!