As part of the 2019 DifferenceMaker® $50,000 Idea Challenge, Circle Health is sponsoring $5,000 for the Contribution to a Healthier Lifestyle category. This funding and award will support a team that best presents and solves a health-based problem.

Circle Health is particularly interested in solving the opioid epidemic. Middlesex county makes up for 17% of opioid overdoses in the state of Massachusetts. More than one person a week dies from opioid abuse in Lowell alone, and Circle Health wants to team up with UMass Lowell, DifferenceMaker and the Zuckerberg College of Health Sciences to help come up with a solution.

These organizations are collaborating to host the Opioid Challenge at UMass Lowell; an event created to recruit students across campus, with a focus on health science students, to brainstorm solutions to the opioid epidemic. These ideas will then have the opportunity to enter the DifferenceMaker $50,000 Idea Challenge. This event will be held on Thursday, November 8th from 5:30- 7:00 PM in the O’Leary Library Mezzanine on South Campus. Students of all majors are encouraged to attend to be a part of this good cause!

The 2018 incoming freshman student Convocation was held at the Tsongas Center on Tuesday 9/4. The incoming freshman, as well as transfer students made up the audience. Provost Michael Vayda kicked off the event by officially calling it to order with three strikes of his spear to the ground. Student Government Association President Andre DiFillippo then took over and addressed the new students with some wise words of advice on how to make the most of their UMass Lowell experience both socially and academically.

After introductions of the Deans of each college as well as Chancellor Moloney, guest speaker Ken Nwadike Jr. took over the microphone. Nwadike, better known as the “Free Hugs” guy, shared about his life, specifically some stories from his past in which he became famous by spreading peace and love in the midst of some of the tense situations in the recent history of the United States.
Once the students settled back into their seats after giving Nwadike a standing ovation for his inspirational words, the DifferenceMaker challenge commenced. The new student audience listened to 3 DifferenceMaker team pitches; Playtlist, Mass Heartbeat, and Etralock, and then were asked to cast their votes for their favorite team via a texting software.

After a few lead changes, the final results of the poll were in and Playtlist ended up with the most votes, a $1,500 prize, followed by ETRALock in 2nd place, a $1,000 prize, and Mass Heartbeat in 3rd, a $500 prize. The contestants then accepted their prizes from Chancellor Moloney, Rajia Abdelaziz, CEO of invisaWear a 2014 Idea Challenge winner, and Steve Tello, Vice Provost for Innovation and Workforce Development. 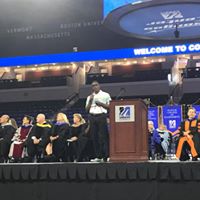 Playtlist is an app for people with dietary restrictions whether it be health, cultural or religious, to find restaurants near them that suit their needs. 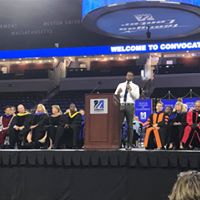 ETRALock is a device that could be attached to any door in order to help people easily and safely access their homes key-free. 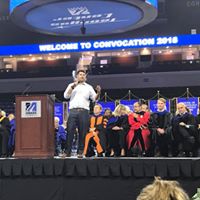 Mass HeartBeat is an organization dedicated to bringing affordable and convenient heart screening services to students directly at their school, camp, or university. Mass HeartBeat uses state-of-the-art ECG technology to screen students for undetected cardiac conditions that could lead to sudden cardiac death if left untreated.

To end Convocation, a member of the Riverhawk basketball team, and President of SAAC, Connor Bennett spoke about his hesitation to join the basketball team, and why he is glad that he did, as well as his responsibilities as President of SAAC. Then, everyone joined in singing the UMass Lowell fight song. What an incredible way to kick-off the year 2018!