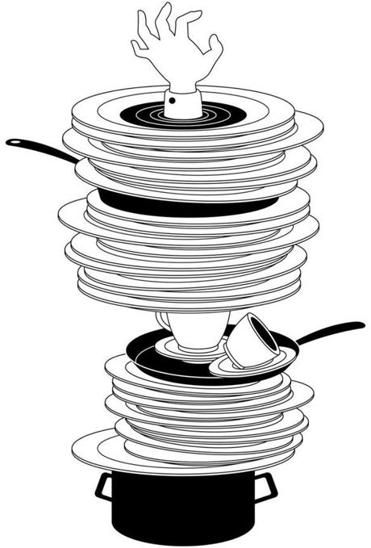 How can it be that one of the nation’s fastest growing industries is exacerbating poverty at a much greater level than other industries? The worst part of it is that many restaurant workers do not see the exploits of their labor; many of them do not know their rights or how to detect if they are being treated unlawfully. This is a social issue that is often overlooked and underreported; those who have worked in restaurants witness or experience injustices on a daily basis: no paid sick-time, wage theft, not being paid time-and-a-half for overtime work, etc. Oftentimes, restaurants employ undocumented immigrants who are afraid to speak up due to losing their job or the possibility of deportation.

Like many people in the United States, I enjoy going out to eat in restaurants, almost as much as I enjoy working in one, but it is hard to fully enjoy my experiences knowing how difficult it is for some restaurant workers to make ends meet and ultimately get treated humanely by their management.

Fortunately, the Restaurant Opportunities Center United (ROC-United), a community-oriented organization, was founded to research and practice how restaurants can and should treat their workers more fairly. This organization understands the influence employers have on their employees, who create a social context in which marginalized restaurant workers are penalized for speaking up for themselves.

However, ROC-United empowers workers to stand together in the face of injustice using Urie Bronfenbrenner’s developmental approach, understanding that the individual and environment have a bidirectional influence on one another (Scott & Wolfe, 2015). As an intern and member of ROC-United, I preach to fellow restaurant workers that restaurants will continue their unjust ways if they remain unchallenged. I encourage them to practice what Bond (1999) describes as “connected disruption,” (p. 350) where the dynamics of a particular institution are challenged in order to “disturb complacency” (Evans, 2015, p. 360).

I have worked in a restaurant for nearly five years and am very passionate about the work I do and those with whom I interact. I love having the ability to meet people from innumerable cultures and backgrounds with the opportunity to brighten up their day. In such a rapidly-growing industry, why does it have to be designed to keep people in poverty? In short, it doesn’t have to be!

I joined ROC-United to help provide a stronger voice for the disenfranchised communities affected by corrupt malpractice. This organization practices many of the competencies of community psychology, including community inclusion and partnership. This is achieved through meticulous and tireless attempts to build an audible voice to ALL restaurant workers experiencing an array of different injustices. In order to promote diversity throughout the various positions in a restaurant, ROC-United also practices sociocultural and cross-cultural competence to demonstrate that the quality of front-of-the-house and back-of-the-house positions alike would benefit from a stronger demographic representation. If restaurant employers prioritized the quality of justice served to their employees, the level of guest retention would increase and employee turnover would decrease—two of the major objectives employers strive to achieve.

Social justice for restaurant workers directly impacts the overall health of our communities. Oftentimes, employees are forced to work while sick because they are told they will be fired otherwise (Jayaraman, 2013). In most restaurants, employees don’t have paid sick-time, which makes it nearly impossible to miss work for those who cannot afford a day off. These practices, which have become the norm in the restaurant industry, infuriate me to no end.

I got involved with ROC-United because I love working in a restaurant, and know many others who do as well, and we feel that we should be entitled to the same rights as those in other industries. These rights would not only impact the worker, but the overall health of our communities. People are more likely to go out to eat at a restaurant that they know treats their employees like human beings. If you work in a restaurant or know someone who does, please encourage them to share their stories anonymously with ROC-United or attend our “Know Your Rights” meetings that teach restaurant workers how to actively and legally resist wrongful practices by their employer.

Josh Vlahakis is a graduate student in the Community Social Psychology department at the University of Massachusetts Lowell.

Sterilization of the intellectually and developmentally disabled: An act of protection or modern day eugenics?

In 2014, a mother in Iowa forced her 20-year-old son, who has an intellectual disability, to undergo a vasectomy. The son did not consent, sued, and won- but not because he did not consent to the vasectomy; he won because his mother failed to get the courts permission prior to the procedure (Volokh, 2014).

Compulsory sterilization (sterilization without consent) remains prevalent in the intellectually and developmentally disabled community to this day. Though the practice of forced sterilization is illegal, the laws have loopholes and do not protect most of those deemed incompetent. These individuals are being coerced into vasectomies, hysterectomies, and tubal ligations oftentimes with no informed consent.

So many questions arise when discussing this topic: Is this sterilization ethical? Would we be better off allowing them to bear children? Should we educate and let them choose? Is birth control an option or is that also unethical? Intellectual and developmental disabilities (IDD’s) vary so greatly that it becomes hard to determine at what point we are no longer advocating for and protecting them and instead taking away their right to choose.

I have personally encountered a woman with an IDD who had a hysterectomy and thought she would one day become a mother, had once had a child and had a tubal ligation post-delivery without her personal consent, and many who took oral contraception daily without their knowledge. Even knowing these women personally, I don’t know which, if any, of these situations were ethical, although, I am certain they would not function effectively as parents. They did not have the knowledge or skills to care for a baby, at least not independently. Some of these women did have the desire to have a child though; perhaps allowing them to have a baby and placing them in an open adoption could have been an alternative? We don’t sterilize women in prison, or those with drug addictions or even those who have been found guilty of child abuse in the past, so why single out the IDD community?

Accompanied by the question of their right to choose is the issue of the risks of sterilization surgeries. Tubal ligations and vasectomies are relatively low risk but hysterectomies are still major surgeries, with significant risks. It is not ethically or morally right to put an individual through a major surgery to prevent pregnancy, especially without their informed consent.

Daily oral contraception can appear to be the “happy medium” but also raises some concerns. When a woman takes daily birth control, she receives plentiful information prior to receiving a prescription and she knows exactly why she is going to be taking it. Many individuals with IDD’s cannot comprehend the purpose and risks of the contraception. Almost all of these individuals take daily medication for health issues without comprehension of why they are being taken, which is understandable and ethical, but they are necessary for health and oral contraception is not.

Placing aside all ethical concerns and even medical concerns, a larger question remains: why are we ignoring the sterilization of individuals with IDD’s? This is a prime example of eugenics existing in today’s society. Are we taking away their ability to procreate in order to protect them from the health concerns of pregnancy and the trials of parenting? It is more likely that we are avoiding the risk of them having a child with an IDD and someone else having to raise and care for that child. If it is, as I suspect, the priority to avoid them passing on the disability and secondly, to protect them, then we, as an educated, developed, society, are allowing and ignoring eugenics. Maybe allowing them to procreate is not the answer but should they not have some say in that themselves? In ignoring the issue of compulsory sterilization, we are failing these individuals. The ethics on this matter may never be clear, but certainly the conversation should exist. #UML #commpsych

Maria Gebhardt is a graduate student in Community Social Psychology Deaprtment at the University of Massachusetts Lowell.