Does the United States have a true and pure culture? In a country where we are a true melting pot of different cultures, there still seems to be extreme xenophobia, or fear of people from other countries. Xenophobia certainly has been heightened since the 9/11 terrorist attacks, especially Islamophobia, but xenophobia has always been an issue in the US. Unless you are a Native American, your family have emigrated from a different country, so why the pushback on immigration? I think most of us know the answer is racism, because there seems to only be an immigrant problem if you are an immigrant of color. This dates back to the the early 1900s when citizenship in the US was not granted to non-White citizens, and it was only recently in 1952 that immigrants of color were allowed to become naturalized citizens (Yakushko, 2009). The Middle Eastern, Caribbean, African, and South and Central American cultures are the cultures that are not “accepted” in the United States- where diversity is exactly what makes up our version of culture. 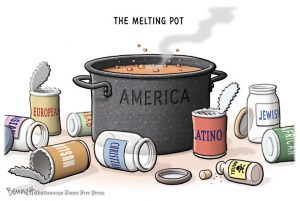 In community psychology culture is defined as societal customs and values which lie outside the exosystem, where individuals do not participate, but have an indirect influence on (Cooper & Denner, 1998; Nelson & Prilleltensky, 2010). In other words, people living in the US are not purposefully influencing the culture, but do so just by existing in the community. Culture can also be developed from experience, therefore different parts of the US, and even different neighborhoods and communities, have distinct aspects of culture anyway. But, again, it is only a problem when it is a community of color that has different cultures from the mainstream, which in the US is White people, who have always been the dominant race (Yakushko, 2009). As the dominant race they are the in-group, and immigrants of color are the out-group, and the in-group is afraid of values, beliefs, and attitudes being challenged by foreigners (Yakushko, 2009). White immigrants inherit White privilege when they emigrate to the US, and are not discriminated against based on the color of their skin, and they are not seen as a threat (Yakushko, 2009). It is the cultural beliefs and values of those who physically look different that is the threat to the “US culture”.

What can we do to help? I believe that there is little hope in our current political and social climate to try and change the minds of people who are xenophobic, but rather what can we do to help the immigrants who live in fear in our country? Due to the pressure from natural-born US citizens to assimilate and leave behind their culture, immigrants actually do not always adjust in the US well (Yakushko, 2009). Also, immigrants tend to internalize the narratives that are often said about them (being lazy, stupid, etc.), which leads to feelings of worthlessness (Nelson & Prilleltensky, 2010). To empower and restore psychological well-being in the immigrant communities, community psychology would suggest that we help them be aware of their injustices, and help them understand the circumstances behind their oppression (Nelson & Prilleltensky, 2010). We need to make immigrants feel welcome and wanted by bringing them together, and working with them in our communities. We need to stand with immigrants in solidarity, and listen to what problems and oppressions they are facing. They are not alone. We are all real Americans.

One thought on ““The Problem with Real Culture””