After a great two weeks in Hubli, we flew across to Chennai. Chennai was more of a city then Hubli and had traffic like you couldn’t imagine. After a short drive from the airport, we arrived at an amazing hotel. We were welcomed with shell necklaces by the hotel staff and put in a real high-quality room, it was a great entrance.

Everyone was sad that they had to leave their new friends in Hubli, but we still got up early the next day to start the tourist side of the trip. We saw a bunch of beautiful, colorful Churches and Temples that were built hundreds of years ago by hand. They were amazing. We got up the next morning and got on the bus to Pondicherry, making stops along the way at popular attractions. The sites were all amazing, drawings and buildings carved into rocks – things I’ve never seen before. I really enjoyed driving from Chennai to Pondicherry. Just looking out the window was amazing, seeing small villages with goats, cows and bulls everywhere, palm tree fields – it was cool to see. Once we got to Pondicherry, it had a different feel to it then both Hubli and Chennai, almost a European feel to it on some streets, but of course still with the crazy traffic and scooters everywhere. Pondicherry was on the water, and we took a trip to an island one day which was a lot of fun.

It was hard to leave India and I can’t wait to get back there some day. The entire trip was a huge success in my eyes and Professor Ashwin Mehta and Professor Mike Ciuchta could not have done a better job. Thank you for making this happen for us and for our university. It was great. I would highly recommend this trip to anyone and I will never forget the friends or the memories made while in India. I strongly believe this trip changed me for the better and anyone would be lucky to have the experience we had. 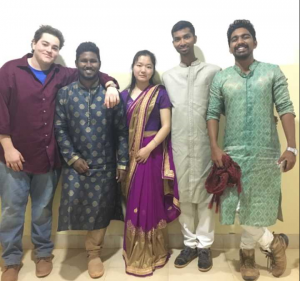 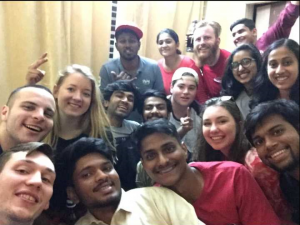 The first two weeks in Hubli could not have been better. The projects were going great and we were all having a great time. At the end of the two weeks there was some hard goodbyes for everybody, and we all were reflecting on our experiences over the past weeks that we’ll remember forever.

Before leaving Hubli, a few of us went to a local orphanage to donate our profits from the 500-rupee challenge. In total we raised about 35,000 rupees as a group. After walking to the front gate and haggling a handful of rickshaw drivers looking for the best price for a ride, we took off knowing very little about what we were about to do. It was always a real thrill taking the rickshaws, weaving at high speeds in and out of traffic, not knowing if you’ll make it to your destination – they were a lot of fun. Once we arrived, we looked around confused for a while, but eventually found the gate in and waited in the office for the man who runs it to get the kids situated. We walked into an old classroom where 30 or so little kids sat staring at us, amazed. Neither us or them knew what to expect from this. They were being very respectful and quiet at first, unlike your typical little kids, but once we tried to make it fun for them, playing games, music and running around, they let loose and were having a great time. We decided to go across the street and buy a bunch of lollipops and chocolates so each of the children felt like they got a little something. The girls were playing games and doing one another’s hair, while I was playing catch with a bunch of the boys. I would throw it out and they would all battle it out for it, while the younger kids would come up to me and ask if they could borrow the ball, then continue to run away, time after time. They were still learning English, but I figured they were saying something along those lines after it happened a few times. I showed them a few videos of Tom Brady at work after they saw him on the background of my phone and were curious. Some kids were shouting his name by the end of our time here. It was definitely one of my favorite parts of the trip and an unbelievable experience I am very happy to be a part of. 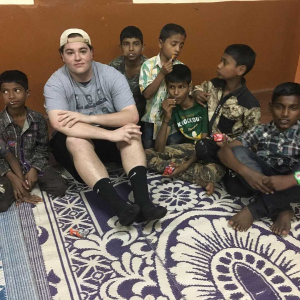 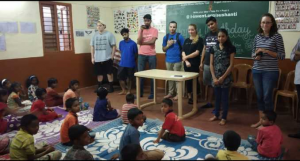 When I sat down on the plane to come to India, I had absolutely no idea what to expect. I was excited to get there, but knew it was going to be a long, intense adventure. When we landed in Qatar, we made our way through the airport relatively quickly, knowing we had another long flight ahead of us. We then flew to Bangalore, India, where we had a 6-hour layover before arriving in our new home for the next few weeks, Hubli. The other US students and I began to introduce ourselves when we were in Bangalore and had a lot of time to roam around the airport and get a lay of the land. I realized that we had a good group of people and was excited to see what would come. When we landed in Hubli, I was ready for a break from all the flying and after not sleeping on any of the 3 flights here, I was extremely overtired. But when we got on the bus to head to KLE, I immediately was no longer tired at all. All of us were crowding the windows of the bus, in awe of what was going on outside. We were cheering, pointing things out left and right, and waving to the locals, as they waved back confused. They gave us a traditional Indian welcome upon entering KLE, I knew I made the right decision to come.

A couple of us stumbled upon a traditional Indian culture festival and although we were completely uninvited, we ended up being put in the front row and were treated like kings. There must have been 5,000 plus people there, all staring at us and taking pictures of the back of our heads. Despite us being hesitant, they brought us up on stage and introduced us as the crowd cheered and then they caught us off guard even more by turning on an American song and making us dance… on stage. I’m sure it was an embarrassing site to see, but we were having fun and for some reason the people at the festival cheered instead of making fun of us. We left in dramatic fashion, as we were already late for our orientation. As we were leaving, people began to swarm us, asking for selfie after selfie. It probably took us 10 to 15 minutes to leave, before we litterly had to run away. I certainly will never forget that day and at this point I was very excited to see what the next 3 weeks would hold. 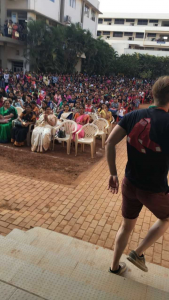 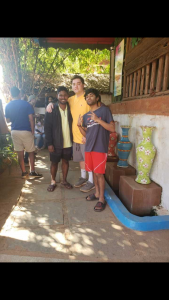