As class drew to the end, it felt like time had flown by. One of my most memorable experiences is visiting a local orphanage to donate the money we raised from the 500 rupee challenge activity in class. I was unsure of what to expect when we arrived at the orphanage. We first walked into the office and met a man who was in charge there to explain how we had raised the money we were donating. He then insisted that we meet the children so he led us into another room. There, all the children sat down in front of us and took turns introducing themselves. Right off the bat, I could tell that they were extremely nervous. After we introduced ourselves and explained why we were there, we started to interact with them. At first, it was hard because we did not speak the same language and they were very shy. But, before long I discovered that the girls liked playing hand-clapping games so I taught them some games that I knew and they taught me a few themselves. Before I knew it an hour had past and it was time to go. Before we left they showed me their bedrooms and were calling me deedee which I was told means elder sister in Hindi. I was so glad to have visited the orphanage because it made me feel like a kid again to play games with them. 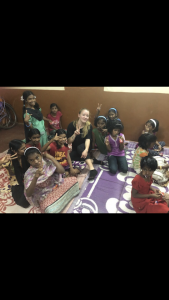 With a tearful goodbye, we left the Indian students in Hubli and ventured off to Chennai. We spent the next few days on an awesome tour bus making stops at historical sights and fantastic views. One of my favorite places we visited was the beach because we took a boat to get there. I loved sitting in the boat and looking at the coastline. When we got to the beach there was coconuts for sale, horseback riding available, and even a spa for your feet that had the little fish that exfoliate your skin. We all ran around on the edge of the water and just enjoyed the beautiful weather. Now looking back, this is a simple memory that I will remember for a lifetime. I am so thankful to have had the opportunity to make memories like this with unforgettable people.

I can’t believe there is only 3 days left of class, I feel so close to the other students, yet, it has gone by so fast. I feel so thankful to be with such a great group of students that make class such a good time. Yesterday we visited Indian Garden where we were able to take a walk through scenes of Indian villages throughout time. I was thankful to be there with Indian students because they explained the different traditions to me. My favorite was seeing the different types of weddings people have and the traditions that go along with them. After a long walk around the gardens we were able to cool off in the “rain dance”. Moments after going into the falling water I was learning how to dance from a group of about 10 kids, and I couldn’t stop laughing the whole time. I continue to be amazed at how outgoing kids here are.
I am shocked at how much I have learned in such a short time. It’s from being so invested in my project, I have been able to make mistakes with my team and come back the next day to work together and solve it. In a typical class back home, I would encounter a mistake in a project and then forget about it until a week later when the class meets again. I find that having class everyday has allowed me to completely immerse myself in the project because I am free from any distractions from other classes. It has been challenging to communicate because we are all from such different backgrounds, yet, I am excited to finish the project because I have faith that everything will come together and our hard work will pay off.
Probably the hardest part of the trip is not petting any of the dogs. As I was walking today I noticed a little puppy hot on my trail. I named him Ralphie and we fed him a little street food. He followed us back to the scholar house. Here, we sat on the step with him and the security guard fed him 2 sandwiches. I am working on teaching him to sit, but it’s definitely a work in progress so I hope to see him tomorrow so that I can continue his training. I’m not sure what the policy is on bringing dogs from India to America but I if worse comes to worse I’ll fit him in my carry on! 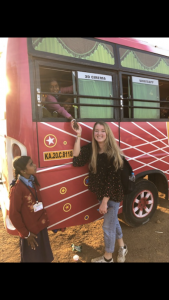 One of my dance teachers 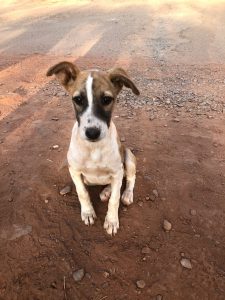 Beginning in Boston, I was unsure of what to expect from such a long flight. To my surprise, however, I slept through almost the whole thing, staying awake only for the free meal. The hour layover in Doha, felt very short and soon enough I was back to sleep on the plane again. We arrived to India in the early morning hours, only to wait my next flight which was 6 hours away, The Bangalore airport made the waiting process much easier, I ordered my first meal in India and browsed the many shops there. When the third flight finally came around it only took 45 minutes to land in Hubli.
We walked off the open plane in the warm air and caught a bus to the university. The bus ride was a whirlwind of excitement. Both the American and Chinese students were together and were in awe of the streets of Hubli, the commotion an activity going on in the streets was so much to take in. I had no idea I would have so much fun just in the first thirty minutes of arriving. Once we arrived we were greeted by the Indian students and given a Indian flag necklace and a Bindi mark. After we were assigned our rooms we went outside to explore.
At one point, we heard crowds of people screaming and music playing so of course we wanted to find the source of it and go there. After searching for at least 10 minutes, we saw people who were dressed very nicely walking into a gate, it looked like there was a wedding going on. We went up to the gate, but right when the guard there was not going to let us go, a girl from inside walked up and asked where we were from. When we told her we were students studying at KLE, she said she would see if she could get us in and brought two students with her. I waited outside with two others until she came back to the gate and let us know we were allowed in and brought us through. She had mentioned it was a culture festival so I figured it would be a good amount of people. We walked in and suddenly HUNDREDS of faces turned and watched us get escorted to the front row. I was in such shock, I turned around after I sat down in front of the stage and saw a sea of people. The event consisted of young men and women wearing traditional wedding clothing from the different states of India. I loved seeing the diverse styles and colors. At the end of the show, when we were getting ready to head off to orientation, the chancellor walked up to the stage and used the microphone to call us each up to the stage and introduce us to the crowd. As we were standing there he suddenly added on that we had a “gift for them”. I turned to the other students confused as to what he was talking about when “Moves like Jagger” started playing. Our gift to them was our dance. So, sure enough we just improvised and did whatever would make the crowd cheer. As we jogged back to the Scholar House to make it to orientation on time, I was on such an adrenaline rush. If this is what my first day in Hubli was like, I can’t wait to see what the next few weeks will bring.