On the first day, we had to go to the ISA office to have an orientation to the culture of Paris and general information about the ISA program. While on the way to the ISA office we ran into trouble when Aditi’s Navigo card stopped working. We had later found out that if you tap the card twice it will not let you in because it thinks you are handing your card back to someone else. After we finally got past the turnstiles, we took the train for about 8 stops before we got off to walk to ISA. On the walk, we had seen the beautiful Notre Dame cathedral which was absolutely breathtaking. While at ISA, we learned many important cultural things and a little bit about “street smarts” in Paris. We learned of the different tactics that many pickpockets and thieves use and how to steer clear of them. 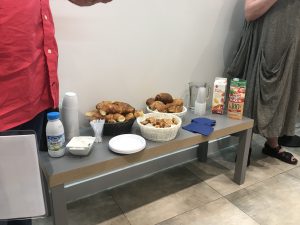 After our orientation, some students went to buy sim cards while others went to lunch. I went to lunch with Aidan at the Café Panis. Once we sat down we ordered an omelet and a croque monsieur, which was something I had been dying to try since I had first learned about it in my high school French class. Once we got our food a song my French teacher in high school always used to play for us came on. The song is called Elle m’a dit by Mika. After our lunch, we had a tarte fine aux pommes with vanilla ice cream. The food is very good here and everything has a stronger taste. Even the bread has a much better taste that seems to be just stronger and better. After our small lunch, we walked around Notre Dame cathedral which was ginormous! There we saw French military personnel carrying machine guns which is very different from how it is in the United States. There we also saw our first pickpocket who was trying to have people sign petitions to be distracted while someone else goes through your purse. After that, we walked back to the ISA to meet up with the rest of the group. 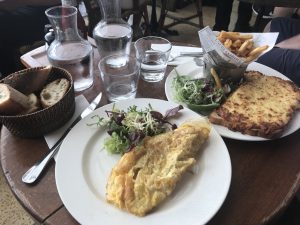 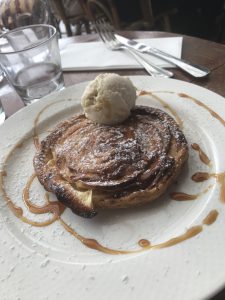 Once we were all together we walked down the Seine River to where the Musée du Louvre is and L’Orangerie. There we saw Monet’s Les Nymphéas, a collection of Monet paintings that are of his flower garden at his home in Giverny. The four panels we saw in the main room were these huge paintings that wrapped around the oval shaped room it was in. There we learned that the name of the museum is L’Orangerie because that was the old storing place for the orange trees when it was too cold outside at the palace during the winter. While we were there we talked about the impressionist movement, Monet, Renoir, and we looked around and saw the paintings of other impressionist artists and others, including some works done by Pablo Picasso. I bought two French books at the gift shop Madeline and Le Petit Prince. 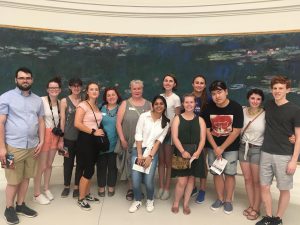 After we walked back to the ISA office and then to our dinner which was at le Montebello. There, we had a menu we could chose off of for un entrée (appetizer), I chose the salad. Un Plat (American’s “entrée”) I got the beef stew, and un dessert (dessert), I got the sorbet. The food was amazing! There we spent a lot of time talking about various topics such as LSU, GMOs, and Quasimodo of Notre Dame. 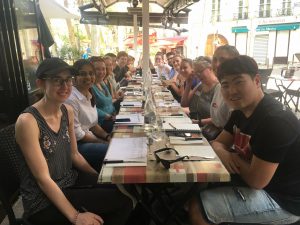 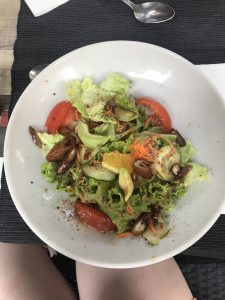 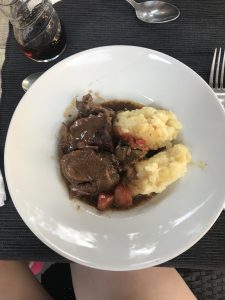 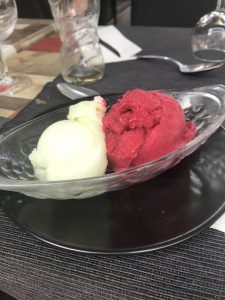 After we ate a small group of us decided to go to the Eiffel tower and Le Champs de Mars. To get there we took the RER train. Once we got off the stop we went through security to be under the Eiffel tower. After a lot of looking around, we had to exit the fenced in area to reach Le Champs de Mars which is a long patch of grass in front of the Eiffel Tower. We took lots of pictures and, unfortunately, Caroline sat on a bee and it stung her. We stayed for a while until the lights turned on and eventually took the RER train and then the metro back home. 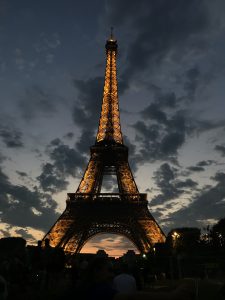 The day of the departure was full of many different surprises. Because it was my brother’s birthday, my family spent time together eating cake and opening presents to celebrate. After our festivities, I said goodbye to my sisters and hopped into my dad’s car where my mom, dad, and little brother would take me and my friend Aidan to the airport. The drive into Boston took no time and getting to the correct terminal was smooth sailing. Once we hugged and said our final goodbyes, both Aidan and I walked into Logan Airport where we waited to bring our checked luggage to the employees and receive our boarding passes. Once we were finally called up, we were told our connecting flight was canceled! We panicked as they told us we would have to spend a day in Iceland because they had no flight to put us on. Finally, after some time, they finally found a flight that we were able to be put on. Part of this whole experience is to not only learn about French and Parisian culture but also to learn how to travel by ourselves. Once we got to our gate to wait for our flight, we met up with Zoe and Jenny who also had the same problem of a canceled flight with no notification ahead of time. We talked for a while about our excitement for the trip and the things we were most excited to see. After some time had passed, Dr. Salmon met up with us and joined our conversation. We talked about how France is in the World Cup and how it is very exciting that they won yesterday, defeating Argentina 4-3. The next game is Friday night and we started discussing the best places to watch the game. We also talked about our Navigo card which is our card for the metro station in France. 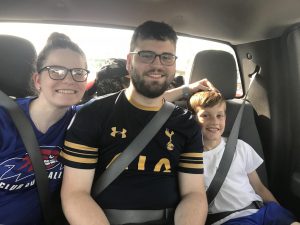 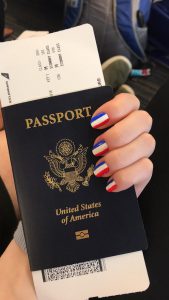 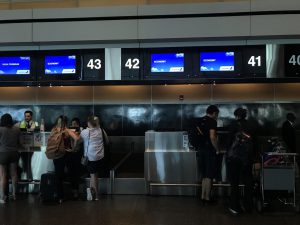 After we boarded our flight, I realized it was the quickest I had ever boarded a plane, and we took off in no time. They gave us complimentary waters and blankets. Because we left late at night, we were able to see the sunset behind the Boston skyline and due to the darkness, we were able to see major cities along the way into the air in the New England area. 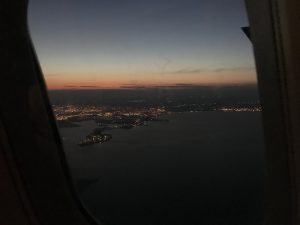 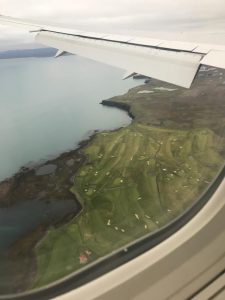 My favorite part about being on flights is watching the GPS of where the plane is along with looking out the window to see what everything looks like. Once we arrived in Iceland, we waited to meet up as a group again before we would take our connecting flight. I made sure to get a few small souvenirs from the Icelandic airport to remember the beauty of Iceland by. After we met as a group and were waiting for our next flight, Dr. Cadero Gillette, who we had met up with, gave us a brief art history lesson talking about some of the things we would see on the trip along with stories about Raphael and Michelangelo and her feelings towards Raphael. We boarded our plane again which took a while to take off. 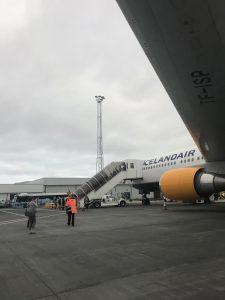 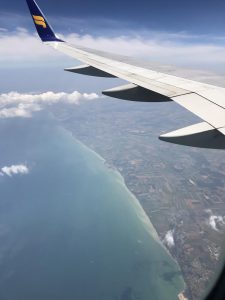 It was really cool when we flew over France because I was able to see the shoreline and see how different the land and the houses looked from different cities. We waited for our luggage and met with the ISA worker. 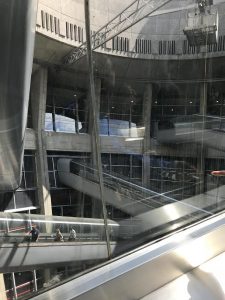 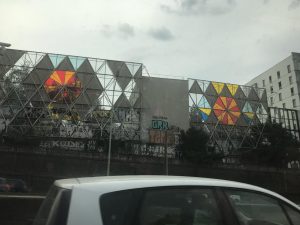 After we found our ride, took a big van back to our homestays. The highways looked very similar and reminded me of what the drive to NYC looks like. When we first were driving in we drove past a very large soccer stadium which you don’t see many of in the United States. Many of the cars looked the same but there was a very common brand that I had never seen before which was called Peugeot. It was also funny hearing popular American songs on the radio. We met our homestay family and they were very nice and welcoming. Although I was extremely exhausted I was able to stay awake until dinner which we ate around 9pm. We ate hamburgers with vegetables followed by cheese, yogurt, and fruit. After we finished our dinner we all sat together to watch the World Cup. Although the day was very long with canceled flights, layovers, and lack of sleep I am extremely excited that we are in France and cannot wait to see all the amazing sights we have planned on our trip!

In the weeks leading up to the Paris program, I have gotten progressively more excited about going to France! I have never taken an international flight and have never been outside of North America so this program is a great opportunity for me to get out of my comfort zone and be able to experience and appreciate French culture in a deeper and more personal way than ever before. This is a great opportunity for me to use all my skills I have practiced and learned in my French classes that I had taken in high school along with those in college. I am so excited to finally experience for myself the many places in Paris we have learned about through textbook passages and pictures. I am currently preparing for the trip by looking through old French binders and notebooks to prepare myself to be immersed in the francophone world. My Mom was also able to find our family tree during my preparation for France. I always knew my mom’s family was Canadian coming from Nova Scotia. In the piles of papers, we found that on both my great grandmother’s side and great grandfathers side, we have information from 15 generations back. Because of this, I was finally able to find that my family originated from Burgundy, France and Brie, France. Although we are not visiting these cities, this only helped to build my anticipation and excitement.

As I am getting ready to leave the States, I am preparing a gift that reminds me of where I live to bring for my homestay family. With any trip comes a lot of packing. I have been putting together a multitude of outfits that I can bring on my trip but, as you can see in the pictures below I ran into some trouble… As I was getting ready to prepare my suitcase, I found my little brother David hiding inside of it! This will be the first time I will be more than a car drive away from my family, and my brother is not very happy about it. I think he is more mad about the fact that our plane departs on his birthday than me leaving for two weeks. He has told me he wants the Eiffel Tower as a present which lead me to have to explain to my soon to be nine-year-old brother that this is not a Nicholas Cage movie (National Treasure) and it will be nearly impossible for me to steal the Eiffel Tower let alone get it through TSA. Although it will be difficult being away from home for so long in a place I am unfamiliar with, I am still very excited for the opportunity and experiences that await! 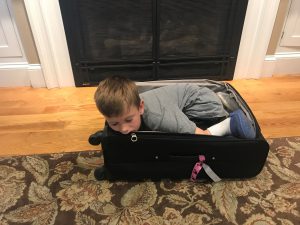 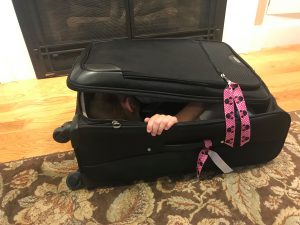 You can also read another one of our many blogs from locations across the globe!