The BnF (Bibliothèque nationale de France) is the second national library built in Paris because the first library ran out of room.

This sign next to the building states that it would take 150,000 years to read all of the books in the BnF library.. wow!

Here we see Rowdy reading one of the BnF buildings!

This new library was built in a contemporary architectural style in which all of the external walls are glass.  The buildings appear to be four open books with a real, exotic forest in the center.  All of this is very interesting and beautiful, but not quite practical.  The forest is full of plants that are not indigenous to Paris, therefore it is very difficult to keep them alive – beautiful idea, but expensive, and not quite practical.

Rowdy liked the forest because he could fly with other birds between the library buildings!

During our discussion outside of the library, a French woman came up to our group.  We were speaking mostly English, so we clearly were foreigners, and she had asked us how to get to the Eiffel Tower! (it was on the other side of Paris).  I found this interesting because it made me realize how huge this city really is!  Paris inhabits about 12 million people! I just found it interesting that a native French woman asked the Americans for directions – in which we pulled out our maps and directed her 🙂

Inside of the library they have research areas in which you need a letter from your professor or university to use the library.  No books or documents leave this library (unless you buy something from the gift shop).  This library is different than the public libraries that we know in the States because it is public, but not open access. To access many of the more private rooms with documents or certain books – you need even more letters! (no food or drinks allowed in these rooms!)

The Mk2 Cinema has about 18 screening rooms for films and even though we didn’t watch a film inside, Rowdy really wanted a picture with it!

After this, we went to the Cinémathèque Française. It was simply amazing!  The first filming took place in Lyon in 1895.  The first film showing was a mere 52 seconds long and the English name for the film is called “Exiting Lumiere Factory”.  From early on, films were becoming popular, and cineastes realized that they needed to protect their work.  This is when copyright laws began to appear for films.

Unfortunately due to copyright restrictions, we were not allowed to take pictures inside the Cinematheque but I truly wish I could show you!  Inside was the display of the history of film! We saw many Charlie Chaplin props and videos as well as Jean Cocteau films, props, and pictures! The evolution of film is just incredible!

This poster was made in support for Henri Langlois who was a major pioneer of the preservation and collecting of films. He was the co-founder of the Cinémathèque Française whose purpose was to save, preserve and show many films that were being neglected or destroyed.

To top off the evening – we watched one of my favorite French films:  Amelie.

A special thanks to Claude Guiguet (a brilliant professor of cinema) who lead our tour today! A very sweet and intelligent man! 🙂

2. Dessert in France is actually heaven on Earth.. as shown below:

I’ve found an immensely new found appreciation for architecture.  Yes, yes, you see or walk into a building – big deal, right?  But have you ever walked into a building and just thought to yourself; “Wow this is beautiful” – and you do not quite know what exactly is beautiful, but you feel comfortable and at peace.

Today, we took a tour of the Cité Universitaire (our dorm mini city area in southern Paris). My favorite house was the Maison de Suisse.   This dorm was created in 1933 by “Le corbusier” also known as “le corbu”.  He had a choice to design this dorm that would represent his country in a traditional way, or in a modern way. This architect chose to  create a very modern styled building that worked with the sun pattern to create a naturally cool element with the perfect amount of sunlight in every area.  The building angle along with the window styles and types all helped create an illuminated building, without the heat that normally comes along with it.

He also used an dual usage/open concept style in which he would separate the rooms with either furniture or open windows in which everything flows wonderfully.  The front left side where the natural stone wall is there to create a natural elements.  The right side is to reflect a more serious industrial/business style.  These two conflicting styles were put together in this particular building to demonstrate the importance of work and play as a student.  It is important to be in touch with nature and enjoy life, as well as work hard and be able to focus on your work.

I feel so lucky to be able to walk into a beautifully constructed building and feel overwhelmed in awh, and then be able to be told by a professional architect exactly what it is about the building that is moving me.

(Live here if you have an opportunity to! As professor Cadero-Gillette mentioned, “Fear stops us from experiencing life.”)

This was the most beautiful building that I have seen thus far.. and we haven’t even left campus yet! 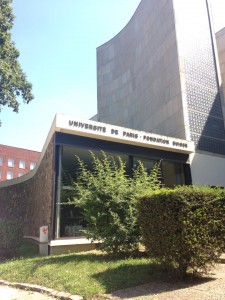 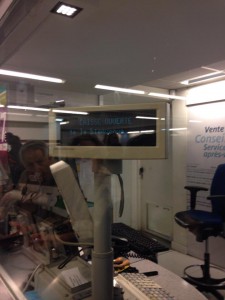