After our two-week class ended we had to say goodbye our new friends and travel to Chennai. The cultural phrases and slang picked up from working with an international team were crucial to avoid getting scammed in Chennai. Everywhere we went dozen of street vendors would come chasing after us and would try to sell us something. After having a minor experience with this in Hubli, the group and myself were able to avoid falling for their traps. On the last day in Pondicherry a vendor came up to me and tried to sell me fake RayBans he kept trying to put them in my hand and with every step I took and tried to genuinely walk away, he kept lowering the price. “1200 rupees, bhaiya(translated: brother)”, then “1000 rupees, bhaiya” and then “400..300”. I was not interested and regardless of how many times I said no, he would keep following me around the market. Ultimately I found the only way to get him to leave me alone was say an absurdly low amount and watch him walk away from us. I responded to his sales pitch with 10 rupees. Although this was a brutal and rude way of getting him to stop pestering us, it ended up working. Our time in Chennai was a blast and I would love to go back! 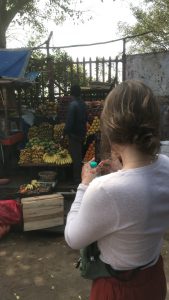 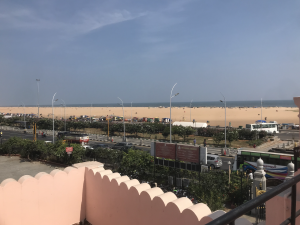 Landing in Mumbai’s Chhatrapati Shivaji Airport was not a new experience for me. I had been visiting Mumbai almost every other year for the past 20 years. This time was different, this time I was by my self. I had flown alone domestically before, but never 20+ hours. After landing at 2 am on Christmas Day, I filled out my immigration form and went to the customs booth. I handed the officer my American passport and my Indian citizenship card and waited for his interrogation. I had planned out exactly what I was going to say in Marathi to seem like a local and avoid having any issues. To my surprise, he just pointed up at the camera, took a picture and opened the gate. This had been the first time I had ever gotten past immigration all by myself. As I walked by the duty-free towards the package claim, I put my paperwork away and began waiting for my bag to come. The belt went around three times before I asked one of the airport employees “Maaza bag disat nai hai” which just said, “I don’t see my bag.” He said something incomprehensible and pointed towards the other side of the bag claim hall. I walked over and found my black bag with a pink ribbon. After walking outside the airport, I hugged my grandfather and we immediately got into the taxi and took off for another 3-hour ride to Pune. I finally reached my home for the next 3 days at 6 am. I planned on immediately sleeping but decided to rough it out and stay awake to avoid jet-lag.

After 3 days of meeting family and eating good food in Pune, we took off on the 27th for the city of Belgaum, Karnataka. Instead of driving the 6 hours, we decided to take an overnight sleeper bus. The bus left Pune at 10pm and after taking 2 chai breaks the bus reached Belgaum at 7 am. I got off at the RPD Cross stop and walked over to my grandparents second home. As I walked in the gate, the security guard tried to stop me as the last time I had been there I was 8 years old. I was too tired from the bumpy bus to explain myself and just showed him the key and walked in. The next day, we got up at 6am and began the two-hour drive from Belgaum to Hubli. I was super excited when I walked into the scholar house and saw everyone’s face. I was so excited to meet and mingle with everyone, I didn’t even bother to unpack! 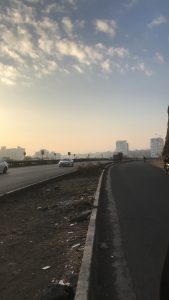