I was anticipating our visit to la Place des Vosges not really knowing much except that a close relative of mine, an aunt, lived had an apartment there years ago. She emailed me last week week saying that she lived there for “six glorious months in 1997” and wanted me snap a photo of her old home; needless to say, I did. While we walked around the square I noticed that most of it consisted of cafes and art galleries, which I thought must have been nice to be surrounded by every morning. 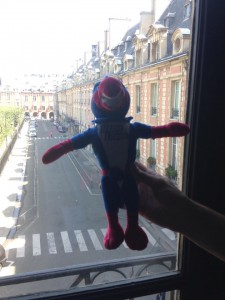 Eventually we ended up at the former home of the politician, artist, and, most famously, writer, Victor Hugo. The specific apartment we visited today was Hugo’s home for a long while before he was exiled by Napoleon III for certain political writings. It’s impossible not to notice the distinct difference in the way each room is decorated; one room consisted of lots of eastern influenced sculptures and designs, while others had elaborate floral patterns on the floor, walls, curtains, and ceiling. Dr. Salmon explained to me that, in the 19th century, someone as important as Victor Hugo would decorate their home as such to display their importance.

An interesting piece of furniture in Hugo’s home, pointed out to me by Dr. Salmon, was a table that he specifically designed for himself and fellow francophone writers such as Alexandre Dumas. On each side of the table there is a writing station reserved for each of them. 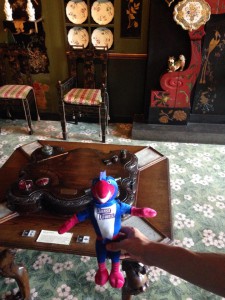 We were also able to see the famous writing desk that Les Miserables was written on. It was and incredibly odd feeling to see such old items that, at one point, were the devices on which such important works were created. 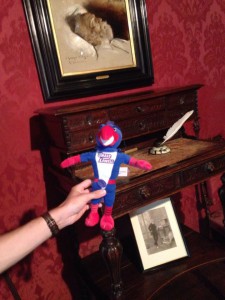 Rowdy posing next to a portrait of Victor Hugo: 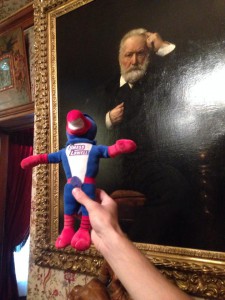 From my perspective, Les Halles was the most interesting district we’ve visited so far for a few reasons. What I noticed at first was that, generally, the shops were not nearly as upscale; this of course made sense because of the districts infamous reputation for illicit activity. As opposed to when we visited the areas in Paris with department stores like the Gallerie Lafayette, I felt more comfortable in this district. Going into such extravagant Parisian department stores makes me feel like I have no business being there, and also uncomfortable with the idea that places like that were meant to drive out the impoverished.   Walking through the streets of Les Halles, I was actually able to find some affordable clothing at vintage stores, and, to be honest, the clothing in those shops are much more appealing to me than, perhaps, a 700 euro fur coat that you would find in upscale department stores.

Something else I really enjoyed about Les Halles was that there were a bunch of different restaurants from different nationalities. As professor Salmon and I were discussing earlier today, such a district would attract more immigrants because it is not as wealthy as other parts of the city.

Another noticeable trait of the district is the extreme contrast between contemporary and older architecture, sometimes standing side by side. Before we entered le Musée d’Art Moderne, professor Cadero-Gillette pointed out, right beside the museum and some urban  art of Salvador Dahli is an old church.

It has been interesting to see the progression of art by first visiting la Lovre, then le Musée d’Orsay, and, lastly, le Musée d’Art Moderne. Seeing the more contemporary stuff today after just seeing the work of post-impressionists such as Van Gogh was interesting because, even though there were techniques shared, art movements began happening so fast that it is almost easy to overlook the influence from previous movements. My personal favorite pieces were Picasso’s later works in which his figures became almost complete abstractions. 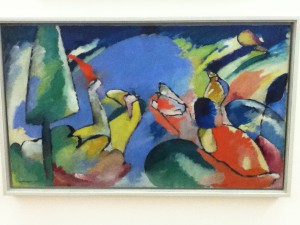 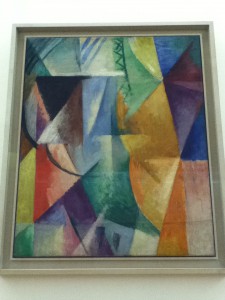 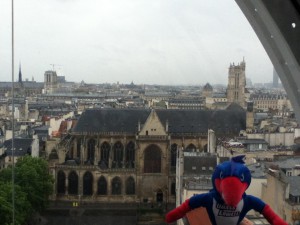 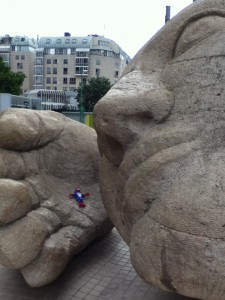