On the 7th of January, we visited the United States Embassy in London. When arriving, the building stuck out immediately due to its beautiful architecture and of course the huge American flag next to it. The building is only about 3 years old and is up to code with american embassy regulations and plans to be for many years. It was a beautiful building and included many security aspects, such as extremely thick glass windows, water surrounding one side of the building, and high tech security measures. I was surprised to see so much artwork displayed in the embassy, but it was nice to see art in a place that you would think to be all business no fun. We got presentations from many different agencies that work in the embassy. One of these included homeland security, which is my concentration! It was very interesting to see how America’s homeland security agents work in other countries. We all found it funny how by some weird coincidence, every person we saw was wearing blue suits while working. The presentations we received really shed light on what actually goes down inside an embassy. It made me consider working in one down the road. 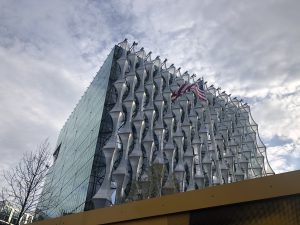 During one of our busy days, Dr. Brennan led us to Westminster Abbey, where we got an audio tour of the church. Aryana and I explored the Abbey together while listening to the information provided through the audio guide. The Abbey had amazing architecture and rich history. We took our time walking through the church, admiring the many burial sites. Many royals have been buried in this church, along with numerous celebrated persons. Some noteworthy royals included King Henry V and all of the Tudors minus Henry VIII. Along with royalty, there are also well-known people such as Isaac Newton, Stephen Hawking, and Charles Dickens. My favorite part of the Abbey was the burial site of Mary, Queen of Scots. On her tomb is a crowned Scottish lion and symbols that represent the French and English crown, as many would believe her to have been the rightful heir to all three thrones. Along with the burial sites, there were also many royal weddings that had taken place in the Abbey, including Prince William and Kate Middleton’s. Overall, Westminster Abbey was an amazing experience and I even wanted to go back for a second tour! 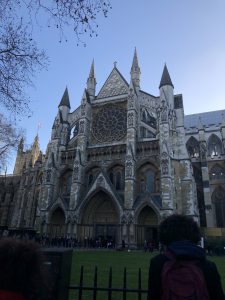