San Sebastian is a city that continues to offer something new each and everyday. The city has an abundance of culture, from its people, to its food to its traditions and much more. San sebastian has so much to offer and the accessibility to many extraordinary activities is within everyone’s reach.Throughout three days we were able to experience all sorts of different activities, from beaches to food to even traveling to other countries.

Saturday afternoon the group met outside the Miramar palace to discuss several topics, such as the last week in Spain and our trip to France the previous day.The Miramar palace was originally built in 1893, for Queen Maria Christina of Austria. The palace served as the royal family’s summer home for many years. Upon Queen Maria Cristina´s death, Alfonso XIII received the palace, but two years later was confiscated and was San Sebastian local government property. It would only remain San Sebastian local government property, as long as it continued to be the designated place for the president of the Republic to stay when he visited San Sebastian. 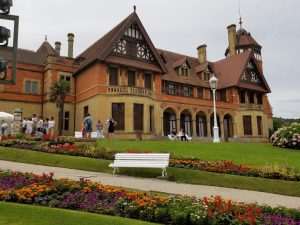 Unfortunately the palace has limited public visiting hours. However for what it lacks in indoor accessibility it makes up for with it’s beautiful landscape and scenery. The palace is set upon a hill that overlooks La Concha Bay, and offers yet another stunning perspective of the ocean. The palace also has great landscaping from it’s beautiful gardens to its well kept grass and is the perfect for weddings, several of which we saw. We were able to sit on the front lawn of the palace whilst discussing our upcoming final week all while being surrounded by utter beauty. 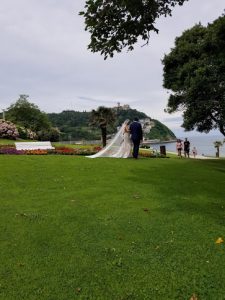 Sunday morning many of the group awoke with high hopes to travel to France on our free day. Unfortunately due to lack of transportation research, we came to the conclusion that that day trip would be better suited on Monday. We then proceeded to have a pretty ordinary day, filled with lounging on the Zurriola beach, and stopping for Pintxos, similar to tapas at the local bars. As we were heading home, seeming like we had not done anything spectacular, we were able to witness a french singer perform some traditional songs in French. 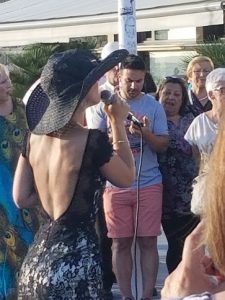 The beauty of a city like San Sebastian is that one can plan to do essentially the same thing every day, but each beach trip has something unique about it, such as the French performer. The city continues to change each day and continues to provide more opportunities for the locals and tourists to explore. Such as the Heineken Jazzaldia, a jazz festival hosted by San Sebastian each year, in the third week of July. This was the first jazz festival ever hosted in Spain and one of the oldest in Europe and this year, we are privileged to be able to witness it in our last week here.

On Monday, with more confidence in our travel itinerary we ventured to France. But as Murphy’s law says “Anything that can go wrong will go wrong,” was a seemly recurrent moto of the day. Our second train was delayed by two hours. With slight disappointment we decided to make the best of the situation and explore the city of Hendaye that surrounded the train station. Upon our return to the train station we were gifted yet another curve ball and were told that the bus would now be taking us to Biarritz rather than the train. With Biarritz, the coastal city still in mind we boarded the bus, which felt like the longest and bumpiest ride ever.

Despite all of our travel difficulties, we made it to Biarritz. The trip would not have been possible without our adaptability and determination. The city is located on the southern coast of France, and a strong Basque presences is felt throughout the stores, shops and restaurants. The majority of the city and beach overlooked the water and the ocean seemed to stretch out for miles. After dining at a restaurant that overlooked the ocean we were able to lay out on the beach and enjoy the sun and waves. 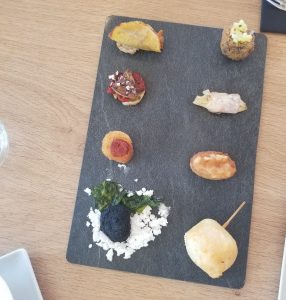 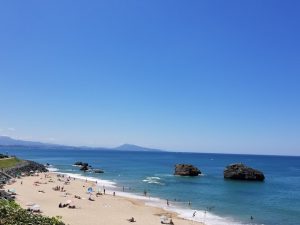 The last week while in Spain seems to be flying by, the opposite to what many of us felt when we first arrived in San Sebastian; that it would feel like we would be here for forever. Now as the time seems to be closing in, we all desire to experience all that San Sebastian has to offer in this short amount of time.