Visit to the Basque Naval Museum

“The Basques helped the Americans before. Let’s see if they can do it again,” mused our professor Julian as our group studied the artifacts and signs of the Basque Naval Museum in Parte Vieja. Julian was referring to the fact that the Basques aided us Americans in our revolutionary war some two centuries ago, but I only fretted about how I’d be able to write my portion of the blog. The museum was on the smaller side, and we were only there for a few hours! What would there be to write about?

Originally, we were scheduled to travel to Idiazabal to learn about the process of cheesemaking, which sounded like a lot of fun, and a potential opportunity to snack on some tasty Basque cheese. Unfortunately, this plan fell through, so we opted for the naval museum instead, which brought about another case of finding the good in any situation, and that when traveling anything can change.

As I looked at the artifacts and read the information on the walls (a good number of which were fortunately in English!) I realized that I didn’t know much about the Basque people at all, and I wasn’t aware they existed until this trip. For example, did you know that the Basques were the most proficient whalers in the world? It was a crucial part of their livelihood, and they were experts at using at using all parts of the whale. They used the bones for making tools, corsets, and even umbrellas. We were informed the next day by Stuart, our Basque teacher, that Basque women were essentially the inventors of using the whale fat to make bars of soap as we think of them today. They were Europe’s main supplier of whale oil and whale products for a long time. Oh, and in case you wanted to know, the best material to create whaling boats out of, at least for a time, was oak wood. Since it was their livelihood for years, the Basques needed the best of the best. 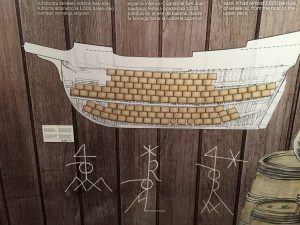 I used to think I was fairly in touch with our Revolutionary War, but how come I don’t remember the Basques being mentioned in that context even once? Lafayette, one of our allies in the Revolution, had set a base in Pasaia in order to travel to America and aid us in our fight. Many Basque mariners and military personnel fought alongside us and the French against Great Britain. John Adams, considered to be one of the fathers of the American Constitution, took notes on how other European governments worked and decided the best model for America’s new government would be like that of Bizkaia, a province in the Basque country.

The U.S. is quick to tout its own patriotism during the fourth of July, that it is a strong nation for freeing itself from Britain’s rule, but I can’t recall a single time in which we thanked the French for giving us a hand in our secession on good ol’ Independence day, let alone for a culture that I bet a good number of Americans haven’t heard of. I feel now as if the Basques have been just out of my line of sight this entire time, and it’s only just through plunging headfirst into a different culture that I now know they existed at all. Could we have won our war without the aid of the Basques? I don’t think I’m fluent in history enough to answer that here, but history dictates that we won, and the Basques were there to help us out, so maybe it might behoove us to include the Basques in our Revolutionary discussions.

On the uppermost floor of the museum, the work of Ricardo Ugarte de Zubiarrain, a Basque artist, was being displayed. Every piece there was made out of parts of a ship, a characteristic of his work, thus connecting each of them to the sea, and giving them a unique, introspective narrative on the sea itself. Maybe it was just because of the knowledge that they were made out parts of ships, but each of them appeared to carry an abstract quality of belonging near the sea, as if the ocean breeze was meant to blow through the carefully sculpted holes and open loops. This artistic connection with the ocean made sense though. Basque culture was deeply linked with the ocean, as shown by their whaling proficiency. And as such, I feel culture can be described as the context in which we find our sense of self. For the Basques, the sea was an inseparable part of that. As someone who is studying art, I find myself looking not only for that inseparable piece of myself, but how others express it too. 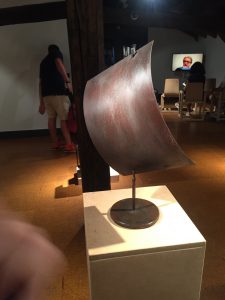 To conclude: What I Learned in Boating School Is…The Basques are essentially an inseparable part of the American cultural idea of freedom, even if we don’t all know it — that idea being that liberty and justice are for all, because the Basques strongly believed this too. After all, our government was inspired by theirs.