Yesterday, we left the mainland we have come to know so well this past week and a half, and took a boat to the Isla Santa Clara, the “pearl” of La Concha Bay. There we swam at a “ghost beach” (one that disappears at high tide), discussed a novel by Gabriel Urza, “All That Followed,” and learned a beginner´s lesson in Euskera, the native Basque language.

As we began to discuss the themes and characters of the book, one particular theme was woven through the accounts of two characters, Marian and Iker: the theme of identity in relation to culture and current events of one´s country.

At their current time in Spain, the then-turned terrorist group of ETA (Euskadi Ta Askatasuna, Basque for “Basque Homeland and Liberty”) was actively assassinating politicians and other people of influence associated with the dictator Franco and his party, the Partido Popular (PP). On the one hand, Mariana is the wife of one such politician associated with the PP, while on the other, Iker is a student in segundaria (high school) who, along with his friend group, gathers after school to discuss and plan helping the cause of ETA. Though each holds a completely different association, their separate searches for identity illuminate the dominating effect that ETA has on their character development.

Mariana through the excuse of a transplanted kidney, which she believes came from a young ETA terrorist, discovers her wild and erotic side which she had suppressed in the context of her stale marriage. At the same time, Iker finds himself part of the only nearby interesting friend-group-turned-society, at which the latest ETA strikes are discussed, and acts of violence around the city are planned in detail, only to be quite seriously carried out in due time. These young people (14-20 years old) had found a cause with which to unite themselves, swept up into the distant yet dangerous ETA and the cause of nationality. 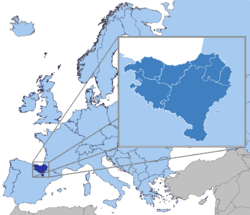 Location of the Basque Country (courtesy of Wikipedia)

One of the reasons that language stands as such a crucial piece of culture in the Basque Country is that it is one of three recognized pre-indo-european languages (alongside Lithuanian and Finnish). It is thought to be the oldest language on earth, as it has no traceable origin. Whereas the roots of English are found in Latin, Greek, and German, and the roots of Spanish, French, Portuguese, and Italian are found in Latin, while Basque has roots only in earlier versions of Basque.

Even though some speculate that Basque is connected in some way with Japanese, the unique historical experience of the Basques has set the identity on its very own course. One thing we were taught about this people is that when the Romans were conquering northern Spain (then called Vasconia), they did not see fit to attempt the defeat of the Basques, because of their strength and autonomy. Their history is riddled with other such stories of being tough fighters and suave negotiators. Whether these stories are true or based in some sort of mythology of the region, the self-perception remains. To themselves they are an independent region and people and, history seems to indicate, will continue to be for a long while.

Thus, through language and history, a Basque people is identified. It has become more evident to me now here than ever before the way in which these cultural settings affect the identity of members of society where the culture is propagated. No human being is born and raised without the influences of both language and culture effecting their identity. It is the cultural soup in which we all must swim if we are to be inhabitants of the earth. We are all in some sense products of our family, city, state, and country.

As a young person looking for purpose in life the situation of Iker and his desire for a cause greater than himself resonated with me. What college student or 18-25 year old in the United States isn´t yearning or searching for greatness of purpose in some way or another? The main pursuit of some is their career, their pursuit of knowledge, their religion, or the helping of others to make this world a better place. Each one of us young people is searching for the way we can be of use to the world, and not simply fall subject to our culture, but to rise up and contribute our strong voice into actions over time.

There is no person to whom the responsibility does not fall to find his calling and purpose. Let us, however, be aware of the strong forces of culture that could be causes that lead to ruin. Though Iker and his best friend were drawn into the purposes of ETA, a terrorist group that had become characterized by murder and violence, may we take this warning to be prudent and wise in considering our missions and reason for living, not only as citizens of the United States, but also as citizens of the world.