This Friday the group did something different than our usual routine. We left class early and ran to a nearby bus stop, where we boarded a private bus to France! Why France? Well you see, the Basque Country is composed of seven regions: Biscay, Gipuzkoa, Álava, Navarre, Labourd, Basse-Navarre, and Soule. Three of these regions, Labourd, Basse-Navarre, and Soule, are in France. So we voyaged across the border to explore the French side of the Euskal Herria(1). 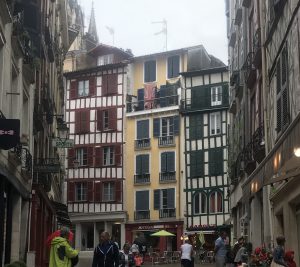 It was really interesting to see and experience the other half of a culture that transcends modern national boundaries. Despite having crossed through border control, it was clear that we were still in the Basque Country. While we may have left Spain, we had not left Euskadi, and we were still surrounded by the same friendly and inviting people we had grown accustomed to over the last two weeks. And while the people there spoke more French than Spanish, “Kaixo” and “Agur”(2) remained universal.

One noteworthy difference, however, was the embracing of Basque culture and French culture as an intertwined pair. This contrasts the common sentiment in the Spanish Basque culture, where people are Basque first and Spanish second. Basques are Spanish in that they live in Spain and they speak Spanish, but in almost all other respects, they are exclusively Basque. They even have their own government. The French Basques however, are definitely French. When crossing the border, one of the immigrations officers asked me, “If your professor is Basque, why doesn´t he speak French?” I found it interesting that the officer did not think to ask if our professor spoke Euskara(3).

Once we had arrived at our first destination of the day, Bayonne, we met up with Sandra Ott, author of Living with the Enemy. We had read this book prior to our departure, so it was really cool to meet the mind behind the work. Later in the day, she would provide a casual lecture on the subject, but first we had to eat. We gathered at a local restaurant and enjoyed an incredible three-course meal composed of traditional dishes and local ingredients. I was lucky enough to sit near Sandra, so while we ate, I learned a little bit about her past and how she ended up in the Basque Country. She had some wild stories, such as eating monkey in the Amazon, but what impressed me the most was her ability to throw herself headfirst into cultures with which she was completely unfamiliar. She is certainly someone who does not let fear of failure stop her from trying. Her strategy is to immerse herself completely into a culture and fumble through the learning stages until she has it figured out. She once mixed up the word for blanket and intercourse, but she and her host family had a good laugh and moved on. This was not only an amusing anecdote, but a perfect example of how cultural immersion (or any personal endeavor for that matter) should be. This was the kind of thing that inspired every one of us. And it is that same type of confidence that I have seen myself and my peers build on this trip 一 the kind of confidence that comes not from perfection but from acceptance of imperfection, from the knowledge that mistakes lead to improvement. 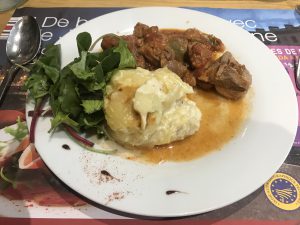 After our meal, we went to the Musée Basque/Euskal Museoa. Here, Sandra discussed her book and the process of writing it. She covered many of the same points and historical anecdotes that she had discussed in the book, however, this time, it was much more personal, which really brought the book to life. In her book, for example, she references a man named Thomas, who was denounced by his father for uncertain reasons. In person, however, she told us about how she came across his file in the archives one day and when she asked her host family about it that evening, she found out that the story of Thomas was, like many stories she came across, better off not discussed. This made it difficult for her to gather the information she wanted, which made me appreciate her book more. It made me realize that everything in it was hard earned. She had done some deep digging over the course of multiple visits. Many of us agreed initially that her book was dense with information and, at times, difficult to get through, but after her lecture, we all had a whole new appreciation for it. After her lecture, we walked around the museum and saw Basque art and culture, ranging from ecclesiastical architecture to pelota chisterak(4).

At the end of the day, we drove 30 or so minutes to the port city of Saint Jean de Luz. Inspired by Sandra, and equipped with a newfound sense of determination, we ventured into the city to explore. For me, this was the perfect opportunity to practice my French! I may have tripped up once or twice, but I had the confidence to put myself out there and try. I think that is one of the most important things we have discovered on this trip, and it is definitely something we will take home with us! 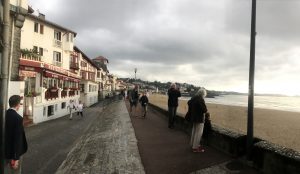 Footnotes:
1.Basque Country
2.The Basque words for “hello” and “goodbye,” respectively
3.The Basque language
4.A chistera is a basket-like racket used in the sport pelota