Coming into this trip I had no idea what to expect; I wasn’t sure whether I would enjoy the experience and be able to whole heartedly live in and learn from the trip, or if I would freeze up at the moment that anyone from the city spoke any amount of Spanish to me. Through the days I have spent here I have been waiting in apprehension towards the day I would have to do my blog post, and was worried if I would be able to apply myself appropriately throughout the activity as well as the actual act of writing about it the following day, especially given that the day I had chosen was going to have a “surprise activity”.

Moving to this Tuesday, July 25th, I woke up like any other day. I went to my classes, and then walked to the meeting place across the city to where we would begin that days endeavours with the University. We started at the San Telmo Museoa, in which we looked around and listened to audio about the history of the Basque region. We only had an hour to browse the various exhibits around the building, and as such we tried to go through it as quickly as possible. From the outside, the building is very interesting, covered with holes of different sizes, through which ivy is supposed to grow. This is as example of the architecture style that is very common in San Sebastian, as it is made to change with time, and eventually become part of the surrounding natural environment. The hope of the project is to make it blend in with the mountain behind it.

Picture of the San Telmo Museum Borrowed under the fair use law which states “fair use of a copyrighted work, including such use by reproduction in copies or phonorecords or by any other means specified by that section, for purposes such as criticism, comment, news reporting, teaching (including multiple copies for classroom use), scholarship, or research, is not an infringement of copyright.” Image found at http://www.basque-country.es/san-telmo-museum/

Inside the museum we began by going through the section of the museum that contained various paintings, statues, and monologues relating to the ancient Greek gods and their respective lores. Following that we walked around the rest of the building, looking at the timeline of Spanish history, reaching from the Balleneros (Basque whalers) to the Spanish civil war.

After leaving the museum we all started waking to the Plaza de la Constitucion for the “surprise activity”. We weren’t sure what it was gonna be, however as we got very close we saw two people who instantly recognized Julian…. with trolleys of what seemed to be very old clothing. We were then told that we were going to put on the clothes in front of us, which turned out to be traditional Basque clothing for different roles in the community, and that we were going to walk through the old part of San Sebastian, “La Parte Vieja” holding various Basque objects. 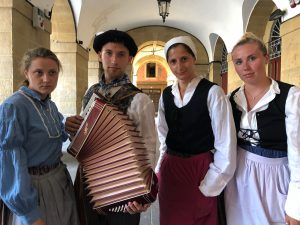 Me with some Basque women

The outfit I had on was that of a Basque farmer, and I was told that my character was coming into town in his “fancy” clothing to peruse the town after selling the crops he had brought. In addition, I chose to carry an accordion, as I play the piano, to play around the town as I walked. As we walked down the streets dressed as farmers, musicians, shepherds, and housewives, the local and touristic people in the town smiled, took pictures, and talked to us in good spirits as we passed. It was very cool to see that even though we were just some American students dressed up, the clothing, accessories, and general appearance of our outfits made people happy, not just because it may have looked a little silly, but because it reminded them of their culture and local customs that used to be, some of which still persist in current times. 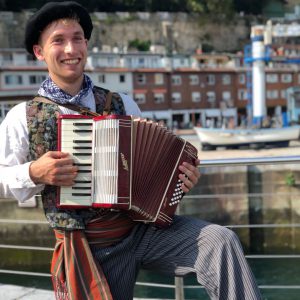 Me as a farmer with my trusty accordion

Going through the town playing the accordion, I felt like even though it was a silly activity, it really starts to represent what the study abroad program is all about. Through that hour walk we were able to gleam a bit of what the Basque culture was like, we were able to practice our Spanish as random people continued to come up to us, and most importantly to be able to raise our confidence in ourselves. 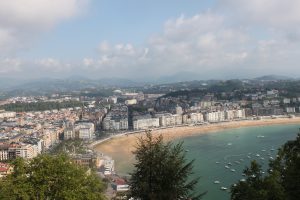 Picture of San Sebastian taken from the top of Urgull Mendia

Throughout this trip I have been continuously encouraged to try new things, and to develop my character. From the various strange and unique foods that populate the city to the amazing opportunities that we had to engage with the culture and populous, I have been provided the chance to figure out more for what I want in my life, as well as how I should carry myself in not only other cultures, but also my own. The people in San Sebastian have been nothing but kind and patient with everyone on the trip trying to develop their Spanish, as well as ready and willing to help whenever they can. I can’t wait to hopefully follow up this trip with one of my own, and immerse myself even further into what is España.