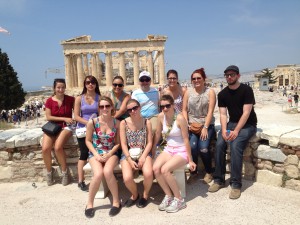 As part of their first assignment, students reflected on their experiences of culture shock or “cross-cultural surprise.” The most commonly mentioned experiences had to do with fast and seemingly-reckless driving behavior and lack of parking regulations (or at least lack of enforcement), the ubiquity of dog poop and graffiti, and the perceived rudeness of certain Greek people (and one pretty egregious expression of anti-American sentiment). Students were asked to think about these experiences in relation to their expectations and the values reflected by these expectations. Finally, students were asked to locate their experiences of cultural difference with respect to the well-studied distinction between individualism and collectivism.

One student reflected on the meaning and function of American politeness, and its relationship to individualism, in light of her experiences in the restaurant industry: “…[W]e see it as our personal responsibility to make other people feel comfortable and welcome. This is even seen in our restaurant system. We put such a big emphasis on being polite and making things easy for customers that waitresses do not get paid unless the customer is satisfied with his or her service and decides to tip. In contrast, wait staff here will be paid regardless of how good or poor their service is. The restaurant industry and our emphasis on politeness and kindness also reinforce the idea that our society is more individualistic than other societies, such as Greece. In the aforementioned example of waitresses being paid depending on the quality of their service, the industry is putting all of the responsibility on the waitress. In reality, everything plays into the experience of the guest; the host staff, the kitchen staff, the food quality, the management team, and the atmosphere all affect this. However only the waitress is penalized for a poor experience and everyone else gets paid. We are very individualistic and it is normal for us to expect on person to be able to overcome any other issues and make the experience great. However, in more collectivist societies such as Greece, it is everyone’s shared responsibility to make the guest happy.”

Adding to this line of analysis, we have been talking in class about how politeness toward strangers, in general, is something we would expect to see in an individualistic culture, versus a collectivistic emphasis on family and one’s reference group and somewhat less hospitable attitudes and behaviors toward strangers. We also discussed how Greece is a culture in transition from more collectivistic to more individualistic modes. But while it ranks somewhere in the middle on this cultural dimension relative to other nations, it ranks at the very top in terms of uncertainty (i.e., in the face of cultural change), which is perhaps not surprising given the ongoing economic crisis. Knowing this has helped us to contextualize the currently volatile politics, and the otherwise baffling prevalence of graffiti, even in the wealthiest neighborhoods. Specifically, graffiti is a form of youth protest here, as we have been told. Our increasingly complex perceptions of our host country will become even more so this Friday, when an ACG anthropology professor will speak to the class about the Greek concept of philotimo, which combines ideas about pride and hospitality—a combination that may seem a little strange to the average (American) Northeasterner, but which is apparently central to Greek culture. More soon! 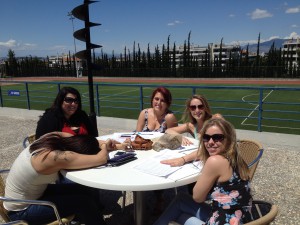 ACG Orientation at the Olympic-size pool

On Wednesday, May 14, nine UMass Lowell students, led by me (an Associate Professor of Psychology), flew from Boston to Athens (through Toronto) for a Summer Study Abroad experience at the American College of Greece (ACG). In addition to taking my seminar on “Culture and Psychology,” several students are taking one additional ACG course, including courses in anthropology and tourism studies. The students really seem to be embracing the whole experience: I have been impressed by their adventurousness and their general openness to new things! And they are also clearly working hard, because we have had some great in-class discussions so far, including about “culture shock” and about understanding other cultures’ “theories of mind.”

Everyone also seems to be enjoying the food, and I and several students have had very positive experiences at a particular restaurant in the neighborhood where we’re staying (Aghia Paraskevi). It’s a relatively new restaurant that specializes in modern Cretan, tapas-style cuisine, using the freshest ingredients (as we were told). The only employee that speaks English is the chef, who, it just so happens, studied in Boston! During our (separate) visits, the chef took us under his wing, picking a special tasting menu for us and chatting about politics and culture. Among the six small plates that he selected for me were the best stuffed grape leaves I have ever had, an incredibly tender and spicy pork dish, a fresh, vibrant beet-and-greens salad, and a pasta dish with goat meat (this is my third time to Greece, but this might have been the first time I ate goat!).

The students are fitting in quite well, and have made friends with other students from the U.S. and elsewhere, including some students from Northeastern who were on the same flight with us (one of our students actually sat next to a guy who ended up being his roommate!). Of the things they enjoy the most about the experience so far, students list the food and the weather at the top of the list. (The weather has been mostly sunny, in the 70s, with a sometimes refreshing, sometimes brisk breeze.) When I asked students about their favorite experiences so far, a few of them mentioned the same experience. As described by psychology major and honors student, Jessica Burgett: “My favorite experience so far was Sunday we went into Athens to tour the museums, which ended up being closed, and instead ending up walking through a neighborhood with shops and restaurants. The stores were very nice and not as ‘touristy’ as some of the other stores I have seen. We also ate lunch at a restaurant that was on a hill, the chairs and tables were placed right on the hill and on the stairs. This was a good experience because even though we are tourists, I did not feel it as much being in this particular neighborhood.” Family and Dunkin’ Donuts (!) were listed among the things they miss the most about home.

We have three different weekend outings planned as part of the trip, including a tour of the Acropolis and other historical sites, followed by a tour of modern Athens neighborhoods, this Saturday. You can follow our travels through this blog and also by “liking” the Facebook page, “UMass Lowell Greece Summer Session” (https://www.facebook.com/?ref=tn_tnmn#!/UMLGreece), where we will be posting pictures from these outings and other experiences.