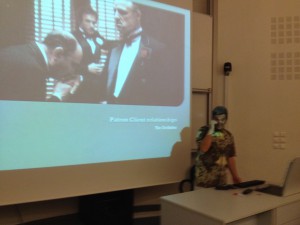 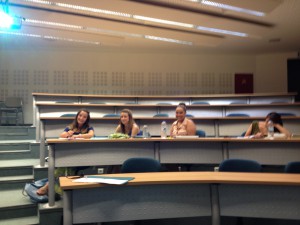 In the second week of the course, Prof. Simeon Magliveras gave a guest lecture on the Greek concept of philotimo and how it relates to patron-client relations in Greece. Philotimo literally means “friend of honor,” and has long served as a moral code for Greeks, governing their behavior and social relationships. As with most “honor cultures,” Greece had long been more collectivistic than individualistic. Collectivistic cultures are characterized by a relational conception of the self and emphasize obligations to others over individual rights. However, with integration into the European Union and increasingly globalization, Greece—like many places in the world—has gradually become more individualistic, and is truly a culture in transition.

Nowhere is this more apparent than in changing understandings of philotimo. With respect to the patron-client relations (e.g., politicians and their constituents) that Prof. Magliveras addressed, the obligation to promote client interests as a matter of personal and family honor has been replaced by more materialistic, self-interested motivations (which isn’t to say that political corruption is new in Greece, or anywhere for that matter!). At the level of personal experience, philotimo is now understood more as a matter of honesty and forthrightness that, when absent, reflects poorly on an individual’s character but no longer has the same potential for shaming his or her family (which was once a powerful disincentive).

As with all changes, this transformation of a central Greek social and psychological concept has had both positive and negative consequences. As the “honor culture” fades away, women have been accorded more freedom and agency, since they were traditionally defined primarily by their power to bring shame to their family and community if they strayed too far from their prescribed roles as first virgins and then mothers (think about the horrible ending of “Zorba the Greek”!). At the same time, some of the (less repressive) social moorings that philotimo provided have also gone the way of the drachma. For example, one of the articles we read for class reported on a multinational study of personality that found a cluster of traits apparently unique to Greece, one characterized by social uncertainty paired with competition.

If this trip has taught us/reinforced anything, it’s that no culture has found the best solution for all the shared social and psychological challenges we face as humans. We Americans tend to be quite fond of the “politeness culture” (though we constantly bemoan its decline) that serves as social glue for our very individualistic populace. But Greeks (and many others) find our version of politeness somewhat inauthentic, and they appear to be a culture in search of a new animating social force to replace what they have lost and what they mourn.