Written by BASH member, Nicole Belanger. This is a summary of her and Maureen Kelly’s trip to Haiti on January 15 – January 22, 2017.

A biodigester is a device that converts waste (human, animal, etc.) into methane gas and slurry. With Haiti’s lack of sewer systems, the spread of disease from a polluted water supply is incredibly common. The biodigester provides a way to cure the sanitation problem, as well as producing two valuable bi-products. The methane gas can be used as an alternative fuel source (i.e. for cooking or refrigeration), which is a more cost efficient source than diesel and other types commonly bought in Haiti. The slurry is no longer harmful once micro bacteria break down all the harmful elements through natural processes. The slurry can be used for fertilizer, as farming is one of the most common sources of income and food for families in Haiti.

On Wednesday, Maureen and I went to Project Hope (Pwoje Espwa), an orphanage located in Les Cayes, Haiti. We met with the director, Cameron Parker, about an existing biodigester located on the site.There is an existing biodigester that was connected to two showers and two bathrooms previously. Unfortunately, the amount of use at those sites was not as frequent as it should have been and not enough substrate was being produced. We knew at this point that this was going to be a rebuild project. This meant we were going to have to find the perfect site to build a new one because the existing one was not a good option. After speaking with Cameron, he told us that the Haitian culture would not accept using human waste as an input, but wouldn’t be opposed to using pig/cow manure for fertilizer. He suggested that we use the pig waste from the pigs located at Pwoje Espwa as an input product and we could build a new biodigster near the pig pens. There were approximately 20 pigs on site when we were there. Currently, the pig waste is pushed out of a tiny pipe located on the side of the pens, and it falls into a hand dug trench. From there, workers can move it and compost it in the composting pile located right next to it. Although these were not the results we were expecting, it was nice that Cameron gave us truthful answers and provided us with an alternative solution/plan for the biodigester.

Cameron also asked us if we would be willing to design a septic system for new housing units he is putting in. We, of course, accepted. Students in Civil Engineering, Kayla Dooley, Owen Gannon, Alanna Grondine, and myself, as well as other active BASH members, are planning on turning this project into our senior capstone.

Our team is already brainstorming the designs and materials we will need to fulfill his request for a pig waste biodigester. We are excited to take on this challenge and help Haiti in as many ways as we can!

Here are some pictures we captured on our trip: 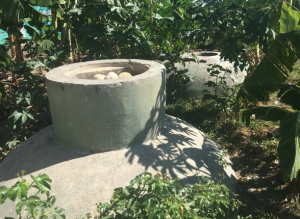 A picture of the existing biodigester at Pwoje Espwa (Project Hope) located in Les Cayes surrounded by overgrown banana trees. 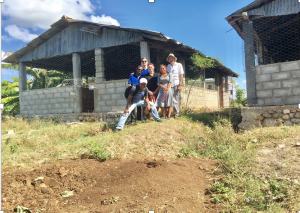 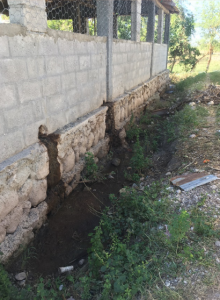 Here you can see the small pipes that the pig waste travels through and the trench that it stays in until the farmers are ready to compost it. 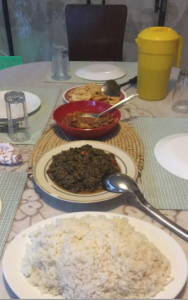 One of the student’s favorite meals; white rice, mixed vegetables, conch in a delicious sauce, and potato fries – All homemade! Top it off with some fresh juice and we were in heaven. The conch was interesting to try especially because we found so many conch shells at the beach! It was SO TASTY!! 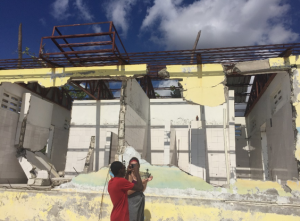 International student, Ralph, and UML alum, Maureen, looking at the destruction in Port Salut after the hurricane. It was very sad and emotional for those like Ralph who knew what the area looked like before the destruction. 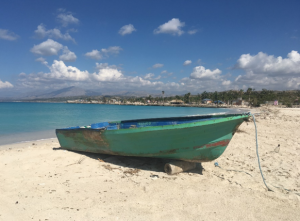 Students got to enjoy a beach day at a beautiful beach in Port Salut. It was very clean and the water was like bath water and crystal clear. It was the perfect way to end our trip. Unfortunately, most of the scenery around this beach was greatly altered or destroyed by Hurricane Matthew, as this was one of the hardest hit areas. 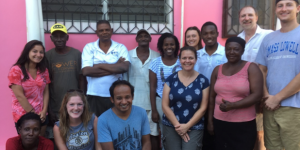 One thought on “Team BASH Goes to Haiti”