After three weeks, our second session is Cadiz is coming to an end. We still have one more day of classes, but our final exams are completed. For the next day, we can each take a breath and seize the final moments we have here. We each have different priorities as to what we will do. Many will go to beach, some will have their last tapa, as for me, I’ll be heading back to one of my favorite cafes that I have discovered. I’ll sit there and read as people walk by continuing on their daily routines. When I do this, I feel like I am apart of the community. As if I really lived here in Spain. I feel like I am blending into everyone and everything else around me. I’ve noticed that its actually a very Spanish thing to do, people watch. When you are in the square you will see children running and playing as the elderly peacefully watch.

I have gotten into a pattern while I have been here. Three weeks seems to be a perfect amount of time to feel utterly immersed in the culture, but still yet so far from it. I’m ready to leave Spain, but also ready to come back again. I think we are each reflecting now on what has this time meant for us. Few have been here solely for the credits, most were here for the experience. For the last week, I personally have been panic struck. I’ve been in Spain for six weeks in two different areas, yet I feel like I do not know enough about Spanish culture or language still. When I left the US, I expected to return with a deep understanding of Spain and Spanish. I forgot that the more you learn, the more you know, the more you know, more you must learn. 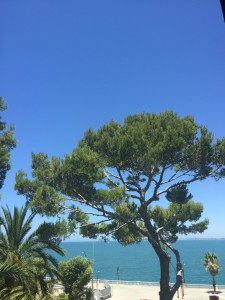 The view from our classroom.

After long discussions with my new friends and teachers I have come to the conclusion that I need to come back, that I need to learn more, and that I love Spanish for more than its convince in the world. I’m not the only one that will be leaving Cadiz with this mindset. Many of my fellow amigos have already started planning a long term trips back to study in Spain. I am so amazed how what can seem like a simple college study abroad program can really change the course of peoples lives. Some in big ways other in small. Thank you Profesora Matz for providing us all with such an amazing program. Each day you helped foster friendships, learning, and exploration between the group. 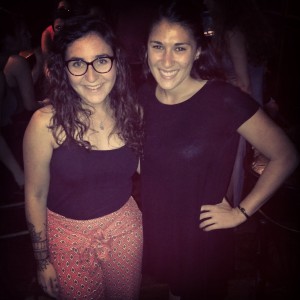 My roommate Jen and I on my last night in Cadiz.

My time, and everyone in the group’s time here in Spain is winding up. I have long since been counting the days, as I enjoy keeping track of things, but now a mere 3 days away from our arrival on US soil, the feeling is really beginning to sink in.

Lucky for us (and this is the only time I will ever say this) we have our even sooner approaching final exam to keep us busy! For me, this exam is a nice test to see what knowledge I have accumulated over my time here in Cadiz. Needless to say studying and a final review is oh so necessary, but I am 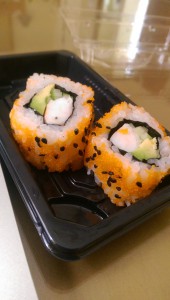 eager and slightly nervous to take and get back the results. Heres a riddle for you, “Whats unexpected, calms the nerves and feeds the soul of a college student?” Sushi from the Mercado de Cadiz.

Yes. I know, “Sushi in Spain? Isn’t that more of a Japanese thing?”, you say. Why yes, yes it is, but in reality 80% of Spain’s red tuna export goes to Japan. Now knowing this I urge you to think about how much tuna sushi there is and the fact that Cadiz is known for its wide variety of  extremely fresh fish(sold openly at the Mercado each day save for Monday). “Hm, maybe Cadiz isn’t such a bizarre place to find amazing sushi after all”, and let me tell you it IS amazing. Would you just take a moment to appreciate the picture. The best California rolls and red tuna nigiri I have ever tasted have been in Cadiz. I liked the Cali rolls so much that I ordered some more rolls to take home for dinner(developing a minor sushi addiction).

In addition to my savory sushi, I had my long awaited canela y azucar( cinnamon and sugar) crepe. It might not look like much, but inside this thing is filled with flavor and the perfect crepe consistency. From week one I have 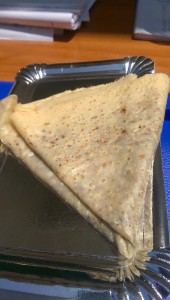 been craving a crepe and I’m proud to say that I finally got one. Before today, just 3 days before I leave, I had just never been in the right place at the right time with the right about of money, but oh was today different. I also acquired this morsel in the eating area of the Cadiz Mercado. Seriously, no regrets.

Morals for today: Study hard, but make time to enjoy life, especially in the last few days. Just because you haven’t tried something up until this point, doesn’t mean that that its too late. And lastly, for the sake of everything good in the world, please keep calm and try the sushi.

It is hard to believe there is only one week left of our trip in Spain. Looking back, I feel like I have improved greatly upon my Spanish, specifically when it comes to speaking. I arrived knowing that the biggest thing I wanted to work on and improve was my speaking and pronunciation. I have now experienced, and I confirm, that studying abroad is the best way to learn a language. Here in Spain, we are completely immersed in the language, while we are at home with our host families, at school, site-seeing, or on the streets speaking with locals.

People from other parts of the world or even other parts of Spain have claimed that it can be difficult to understand when people from Southern Spain speak Spanish, but I have not encountered any difficulties. I can definitely hear and recognize the Cádiz accent, but I have no problem understanding people when they speak. The only thing I need to work on is understanding native Spanish speakers when they begin to speak very fast, no matter where they are from.

Our classes here are very discussion and conversation-based, which makes sense considering listening and speaking are two of the biggest aspects of a language. The classroom setting is a great place to practice because there are students of all different levels and we can help each other without feeling awkward or uncomfortable (as some may feel while speaking in public with a local). It is also nice to have the professor there to help us and correct us when necessary. We get to practice speaking about so many different topics, therefore practicing using new vocabulary and grammar all the time.

I feel like I got the most practice speaking Spanish at our meals with my host mom, Pacquita. We would eat lunch or dinner and end up just sitting there and talking for a long time. I would talk about my classes and various experiences in Cádiz, and she would talk about her past and her life as it is now. She is a very interesting, kind, sweet person and I am so lucky to have had her as my host mother in Spain. We can understand each other very well when we speak and she also makes sure I understand what she is saying and will explain it using other words if needed.

I am so glad I have had this experience because now I feel much more confident in my second language. I truly love the language and I think learning a new language is so much fun. This is happening at such a great time too because I am about to get started in the health field, where knowing Spanish will certainly be useful. I unquestionably recommend studying abroad in a foreign country to anyone wishing to learn a new language, or improve upon one they have already studied. 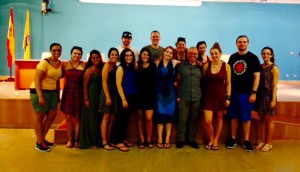 Our Spanish class with our professor 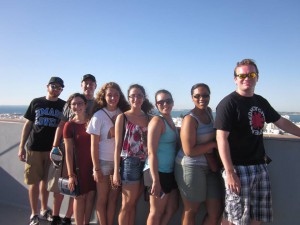 Some classmates at the top of the Torre Tavira

I am amazed at how after 5weeks, Spanish cities still are able to captivate me. This weekend we spent about four hours traveling from Cadiz in the city of Granada. Before leaving Cadiz, I had spoken to many people who said Granada is their favorite city. After doing some research on the history, food, and people I had high expectations for the city. After a long, windy, and beautiful bus ride we reached in Granada around 2:45pm. Although we had only been on the bus, most of us were exhausted. We took a short siesta in the hotel, mainly poolside.

Around 4pm, we ventured out into the city of Granada. As a group, we toured through the city, along with a wonderful guide. He explained the historical significance of many areas in the city including the cathedral, the Moroccan market, and the Arabic area. The cathedral was massive and was in actually three different buildings. To my surprise, in the cathedral were the tombs of King Ferdinand and Queen Isabella. This underlined the great historical significance of this city. I was shocked by the overall beauty and energy that surged through the city. Whether I was looking at solid gold master pieces in the cathedral or the people relaxing with a drink and a tapa, I knew that this was not going to be a boring weekend in Granada. Once the tour finished, together with a few friends, I went back to the Moroccan market to explore. I was brought back to summers in Israel, in the open air markets, haggling, searching, and feeling utterly overwhelmed. There was so much to look at! Beautiful things were everywhere in sight. After the market, we went back to the Arabic area. I bought a dress and had a Moroccan woman put henna on my arm. For the hour or two that I spent in those two areas, I felt like I had been taken from Spain and brought to Morocco. 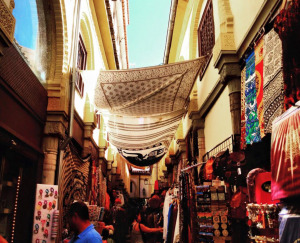 Now it was time for dinner, which meant time for tapas. I was so excited to try tapas in Granada, because I knew that with a purchase of a drink they would bring out a tapa to match. Although I knew this, I was still shocked when it happened. By the time I had finished with my tapas there wasn’t even a need to really order a meal, but for the sake of delicious Spanish food, it was my duty to have more. We all quickly ran back to the hotel to meet with the group. We would be going to a Flamenco show. While in Cadiz, we had gone to a flamenco class and talked extensively about it in class. However it had never occurred to me that there are different types of flamenco. The flamenco in Granada was very different than the flamenco in Cadiz. My observations were that flamenco in Granada was more staged, dramatic, and had a stronger focus on dancing. While in Cadiz, it is much more toned down, very serious, and filled with emotion. A group of five people preformed for us; It was an intimate venue and the performers were feeding off of our enthusiasm. 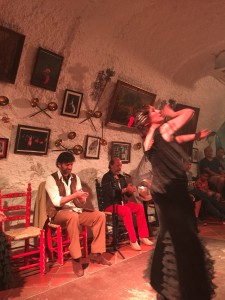 Around 12:30am were headed back to the hotel. After an exhausting, busy, and wonderful day, I laid to rest in an air conditioned room for the first time in 5weeks.