During the beginning of the trip we have stayed mostly in Braga, which is located in the Minho region of Portugal. Today with the help of a tour guide from Guides in Portugal we saw three cities also in this region, Viana, Pointe de Lima and Barcelinhos. Each of the cities was full of life from the medieval architecture to the many weddings we walked by. Due to the strong Catholic history each city had a beautiful church.

In Viana, we visited Santa Casa da Misericordia de Viana do Castelo which was completed in 1722, just six years after the start of construction. Inside of the church, many styles come together, including baroque, rococo and renaissance. Around the church are detailed wood carving covered in gold leaf, decorative tiles, painting and sculptures. One the tiles the seven works of mercy are displayed. Representations of the Passion of Christ are prevalent in the church. Viana also had another church on the top of a hill. The view from the top was stunning, but due to a wedding we could not enter the church. 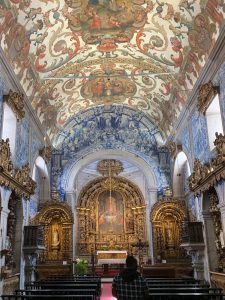 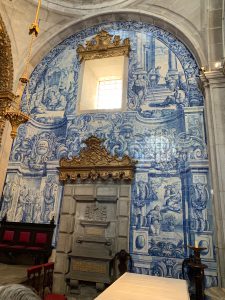 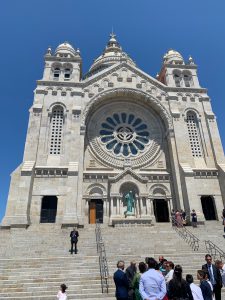 After Viana, we went Pointe de Lima where we started with a lunch at Restaurante Acude. Out the restaurant water is a beautiful view of the Vez river As a starter we were served bread, cheese and pork ears. For a main course there was a choice between fish and pork, both of which were delicious. Extremely full from lunch we made our way to the historic downtown. In this downtown, remained a Roman bridge and parts of the ancient city wall. Though not as elaborate as the church in Viana, there was the Camara Municipal de Ponte de Lima, a small chapel from at least the 18th century. 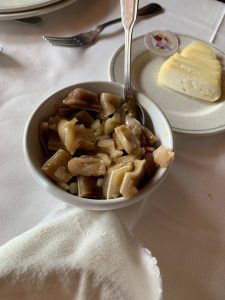 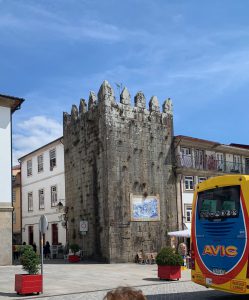 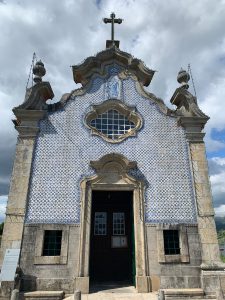 Lastly, on the way back to Braga we stoped in Barchelinhos. There was another church, the Templo do Senhor Bom Jesus da Cruz. What stood out to me at first about this church was the circular shape. Inside the church to the right is an elaborate wood carvings covered in gold leaf, around the lady of sorrow. Around the pews  were blue and white flowers from a wedding earlier that day. 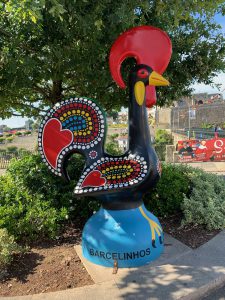 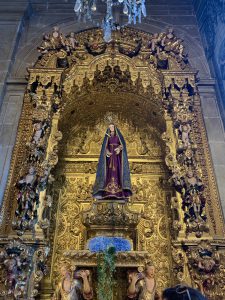 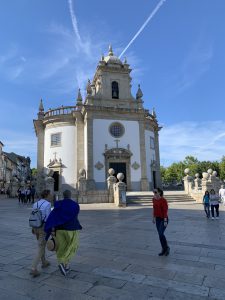 In the Minho region many of the cities may seem similar at first but each have their own unique history.

Today we got the chance to step out of Portugal and see Spain. Once in Spain, we started with a very traditional meal at Restaurante San Clemente which included starters such as, empanadas, calamari, and prosciutto. There were two choices for main dishes, either pork or fish. I chose fish, something out of my comfort zone and loved it! 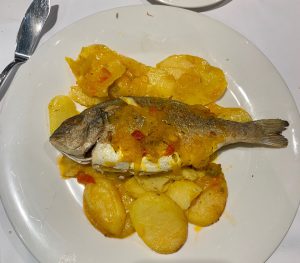 After the meal, we began a tour of the city center, focusing on the Cathedral de Santiago de Compostella. The Cathedral is, in my opinion, one of the most beautiful displays of architecture I have ever seen. It is hard to believe that some parts were built centuries ago. Our tour was given by a local guide was named Diego. This Cathedral is the final point of an over 100-kilometer pilgrimage many people complete each year over many centuries. There are several trails from various countries that lead to the cathedral, for example from Portugal, France, Italy and other parts of Spain. 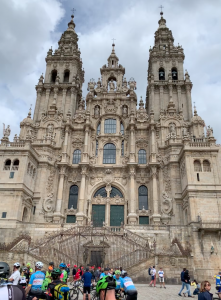 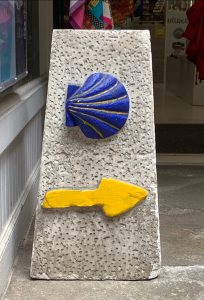 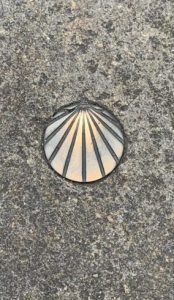 Places that have the shell outside welcome people on the pilgrimage to stay overnight, clean up and eat. At these spots, the pilgrims will get stamps to prove that they have walked the required 100-kilometers. On the tour, we met two Portuguese women that had spent the past four days walking to the Cathedral. Below is one of their cards with each of their stamps. 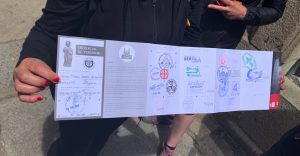 The reason that people come from all over to this cathedral is that it is believed that the bones of Saint James are under the Cathedral. Saint James was a Fisherman that then became a disciple of Jesus, he preached the word of Jesus in Spain. There was a prophecy that Spain would become Catholic due to the actions of Saint James. Unfortunately, he was beheaded, after his death his bones were brought to a crypt under the cathedral, fulfilling the prophecy.

Shells such as the ones all around the cathedral are also seen in Braga. Traveling to the cathedral and learning the history surrounding it was very powerful for me. Being Catholic made the experience even more special for me. Seeing the influence the Catholic Church has had on every country is breathtaking. I am excited to experience other cities, such as Porto and Guimaraes, in the next nine days.