We walked out of the bus and immediately we saw cars parked by the curb, gated houses, palm trees, locals, and after a little walk, an outdoor escalator, yes you heard that right, an outdoor escalator had peered to the left! It led us in like a portal to the real deal of what tourists come to see from all over the world. 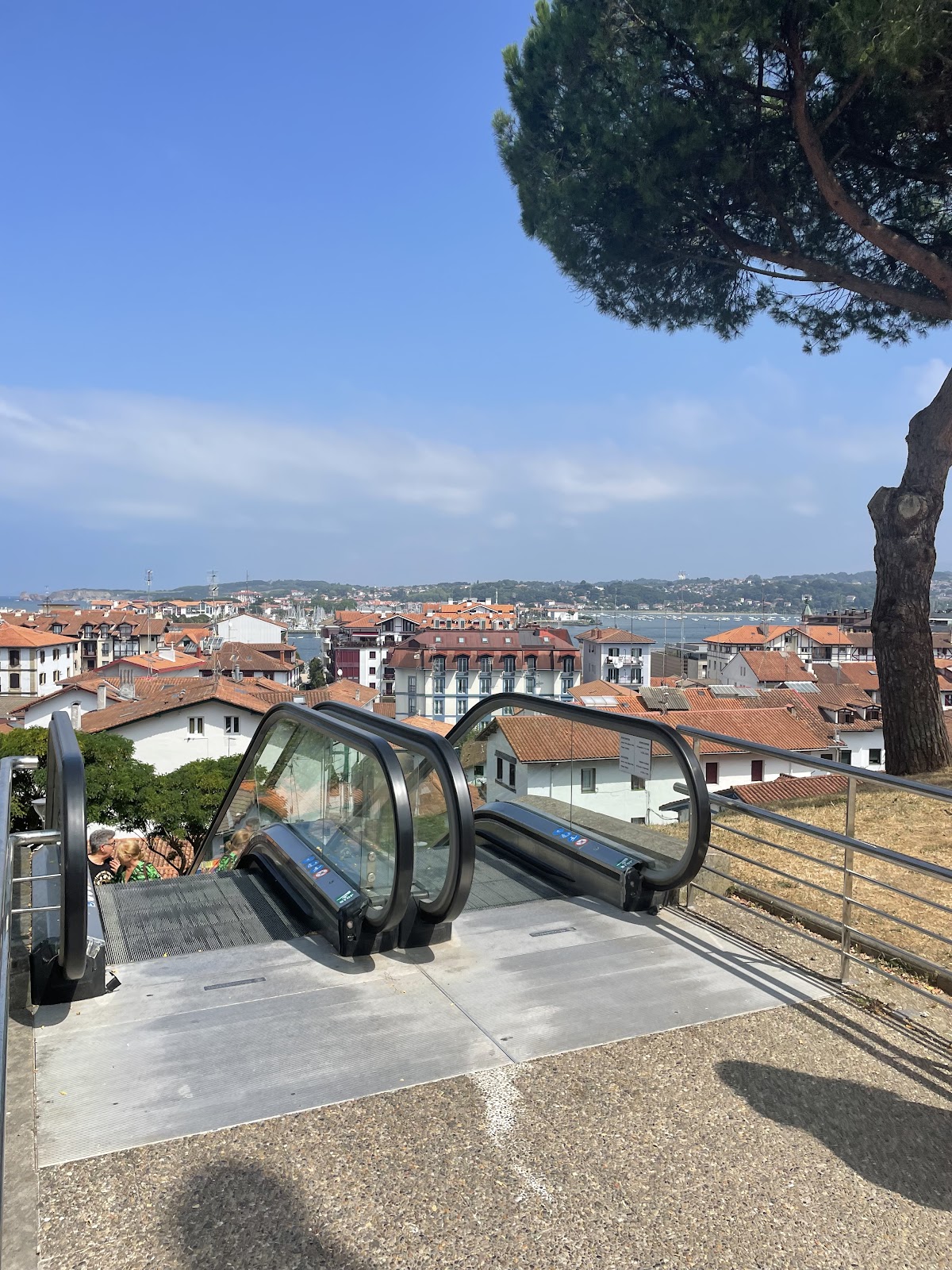 I felt that there were layers to this place. Where our bus stopped was only the outskirts where you have the residential areas, but the outdoor escalators sucked us into the magnificent integration of tourist and residential life. Each apartment building was unlike the other and there were lots of contrasting and bold colors for the basque style homes, each marked by boutiques/stores on the ground floor. We kept walking and got onto a trolley that took us around this petite, but architecturally intricate city. We went up a mountain that had mansion-like homes with a rural aesthetic. In the center of the town, near the cathedral, there were medieval style homes, fortresses, and gates. I was interested in finding out why that area stood apart from the rest with its narrow, heavily cobbled streets and medieval structures. Upon doing some research, I found out that it is called the Old Quarter. It is characterized by fortresses and gates. Puerta de Santa María is the gate that leads into this old town.

On one side of the bridge, you have the rural areas and on the other, you have quite the contrary, medival areas.

There is a castle of Charles V located on the Plaza de Armas in the center of Hondarribia. Formerly a palace and castle, the French army destroyed part of the building in 1794. It is a fortress town as it’s located 20 kilometers east of San Sebastian, 20 kilometers west of Saint Jean de Luz in France, or 35 kilometers from Biarritz. The final sector of the town I observed would be the Basque homes in the marina district, being an important fishing harbor. The marina district was tied together by each balcony having been adorned with beautiful flowers.

We chose to go to Biarritz on Saturday, so we could spend the entire day there to really soak in its beauty. Biarritz is an elegant, French Basque city. We stepped out of the bus at the airport and took a local bus that would stop near the Maison Adam place. It is home to the world’s most famous Basque macaron.

A fun fact is this town came up with the Basque macaron, a well-guarded recipe that only three people alive know. It tastes like a buttery biscuit that just effortlessly melts in your mouth. I went looking for a typical French macaron and tried 3 different flavors, blueberry being my favorite! This town was characterized by white buildings with accents of lightly colored stone facades and wrought iron balconies.

We arrived at 2:52 with no sight of our bus, so the question at hand was if bus left on time (or early) or it didn’t come at all. We sat there patiently for a half hour, trying to convince ourselves it was delayed. That half hour turned into an hour, at which point we knew it wasn’t going to come. We made our merry way back to the streets of France, getting to our unfinished business such as checking out the shops that we didn’t initially have time for. When we got back, I needed to use the restroom, but my finger got caught in the push to flush button, which quite literally peeled off layers of my skin and created a hole in my finger. Enough of the gory imagery. Oh this day only gets better. We went looking for a pharmacy and I asked for the French version of Neosporin but apparently it’s prescription based so I had to settle with these bamboo band-aids.

We went to the most dainty bookstore to ever exist.

The bookshelves were organized as such: English, religion, voyage, guides on the first floor and French literature, policies, history, science and humanities on the top floor. I found it interesting how the first floor had English books and the upper floor had French novels. The English bookshelf was placed strategically to attract tourists as when you walk in your eyes go straight to the English books up ahead. Eventually, we made it onto the second bus!

At around 9, we got to Parte Vieja for the Semana Grande. We came to the church in Parte Vieja and started dancing with people in yellow vests. We felt like we were part of the performance as I and a couple others from our session rushed through the crowd to get to the front. They were playing the drums and I was mimicking their actions. You could just see crowds of people in uniform motion swaying side to side with the beat of the music. I felt like I was part of this festival and this segment of the festival really made me fall in love with the culture and aura of San Sebastian even more.

We made our way to fair. That was the best fair food I’ve ever had. Like C’mon how can you top Nutella, Kinder, and oreo covered waffles. My favorite ride was the swing one. On the swing ride, I kept saying that I’m flying off my seat and Ashley thought I said there’s flies on my feet. There were times I thought I would slip out of my seat as I kept bouncing around in there because there was a lot of room. I was filled with energy and wanted to stay out more, but I had to sleep for we were going to Zugarramurdi the following day.

Day 3: Stranded in a Witch Town

The sounds of the leaves rustling outside was really setting the tone for a spooky day ahead. The person at the front desk didn’t know of any taxis that go to Zugarramurdi. He knew a train went to Irun, but from there, he wasn’t sure of a taxi that went to the secluded town of Zugarramurdi. Then, the other person at the front desk gave us vague instructions on how to get to Irun via train (at Lugaritz) and a taxi station next to a casino, which he said would be a 10 minute walking distance from the train station. At our stop in Irun, they had a Papperino gelato place as well as a Lacunza school by the casino. It was like home away from home (San Sebastian). As we were driving up the mountain to Zuggaramurdi, I could see medieval, ancient-looking houses made with grey bricks and brown window panes.

We went to the museum and the caves. We also got to dip our toes in the creek, which Professor Z said is believed to have originated from hell.

Then, we picked up the Basque Witch Curse. No taxi driver was willing to take us back to Irun because he said the area is restricted as that would require one to cross the border of France to get here. However, we made it to Zuggaramurdi by going around France. So, his logic was not valid.

We got the help of the locals who said a driver in a BMW would come at 8 pm to pick us up. Even though we had a language barrier, there were so many people who knew both Spanish and English, which was a sigh of relief. Those three ladies were so kind to talk to the taxi company because we couldn’t understand what they were saying when we requested them to send a taxi. They suggested major cities that we can walk to, from where we can catch a bus. However, the nearest hub would be in France and none of us brought our passports. They went an extra mile to help us out by asking the workers at Zugarramurdi if they knew of taxis. These experiences are one for the books and are part of the adventure. They make for a great story time! It brought us closer to the natives, who are so willing to help when they very well could’ve said sorry and went about their day. Instead, they made sure we had a way to get back to our home. It also teaches us that language barriers can be overcome as long as there is a willingness to help and be there for one another. If we get stranded again, the locals have our backs!

We finished our night by watching the fireworks show put on by the Ukrainian team. It is actually the first time Ukraine has participated in semana grande. Right after, shots were fired for the bull run. 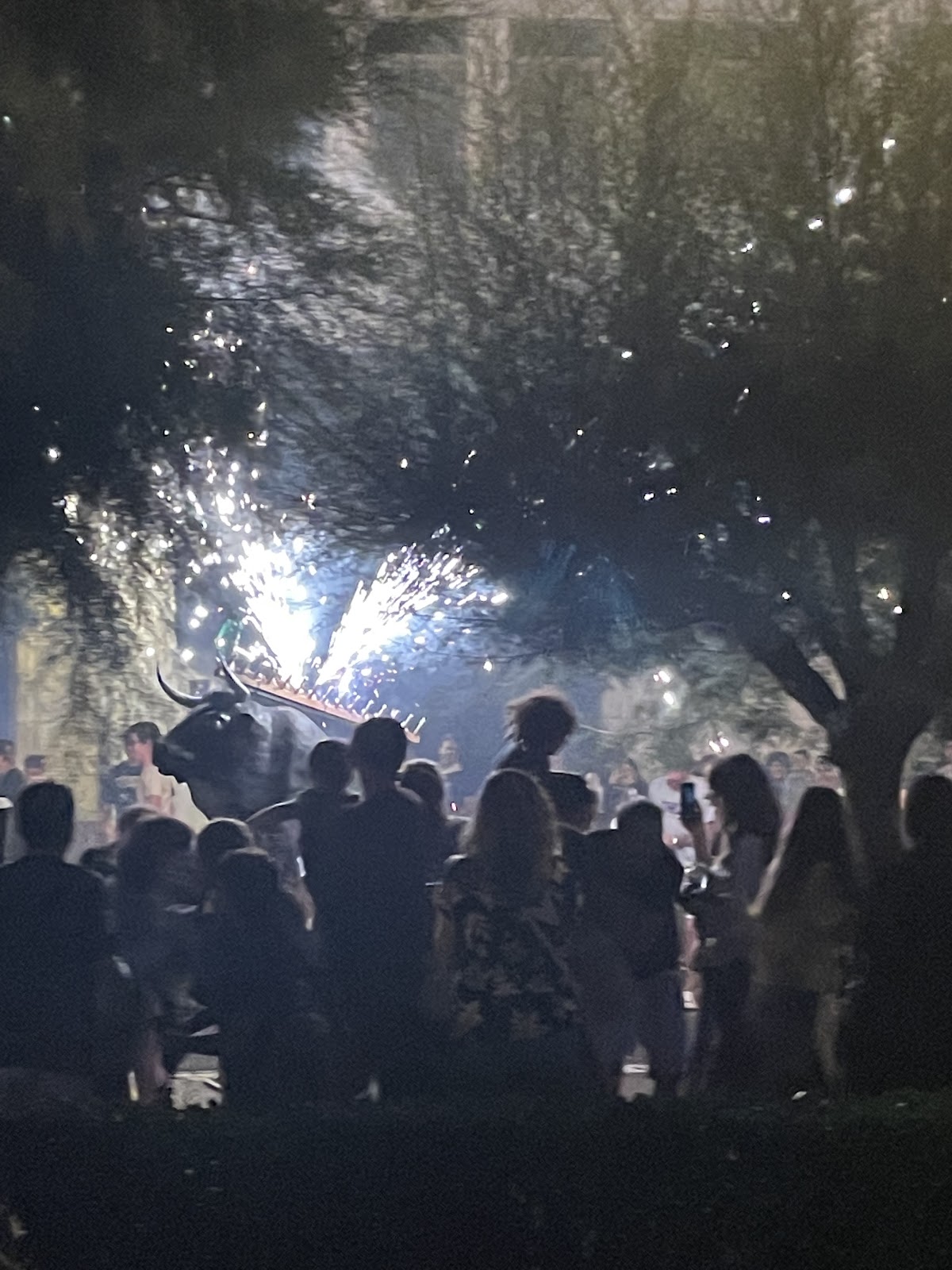 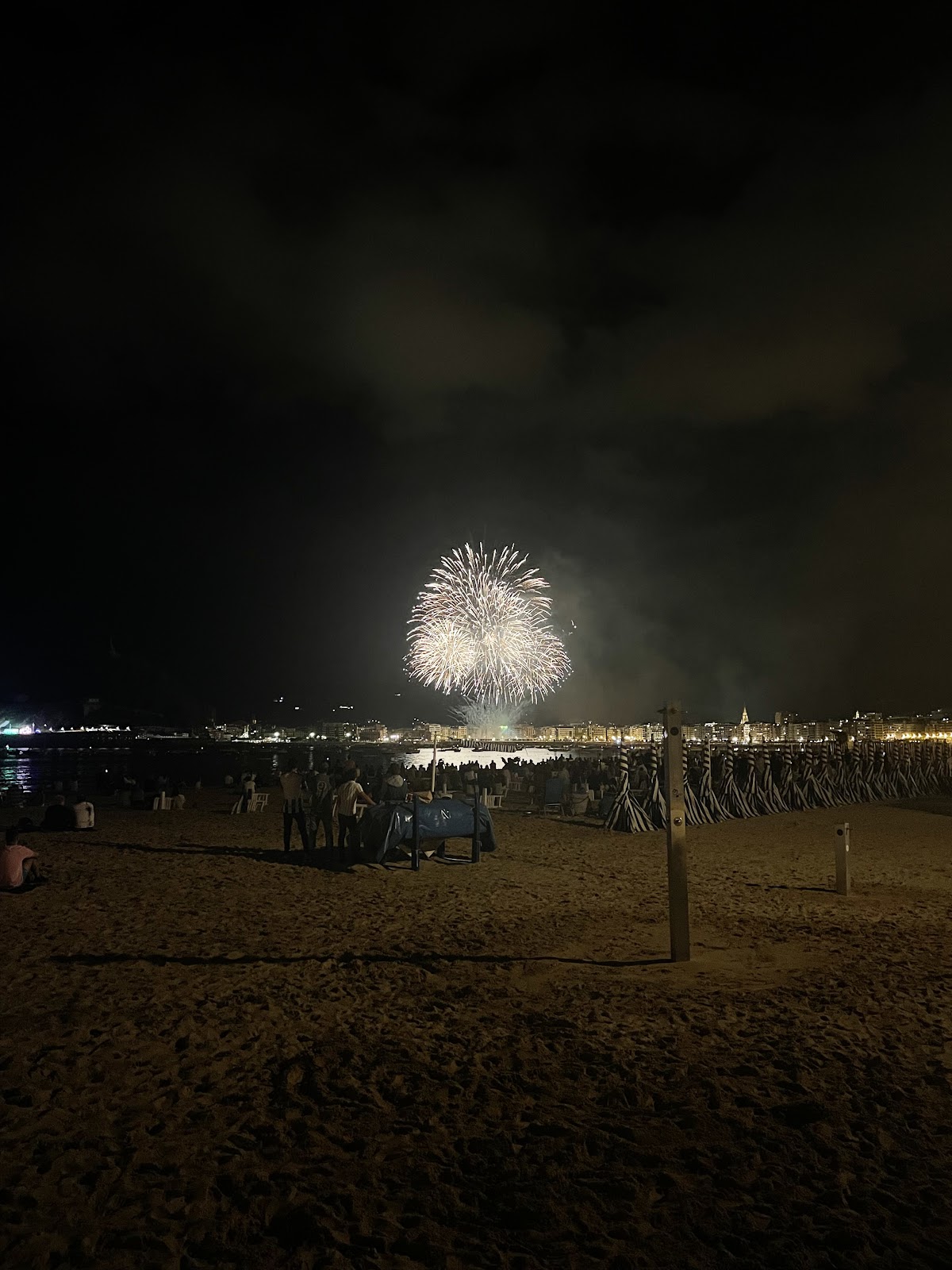 I watched from afar because I thought the flames would burn, but I learned that those were cool flames and won’t actually burn your skin or clothes. I might run next time! I still can’t process how I only have a few more days left here in San Sebastian. It will be tough saying goodbye to the town I referred to as my home when we went on these day trips.