The plan to hike mount Urgull seemed to have started a day early as a few other students and I find ourselves lost in a town outside San Sebastián. As we casually turn a 30 minute commute into a two and half hour trip, we jump from bus to bus and walk on the side of the highway with incredible views. However the outcome was definitely worth it, as for most of us who attended, it was our first horse race. We had students betting with no knowledge other than wanting to do it for fun and cheering on random riders as they hoped they would win. Fortunately we didn’t have such a hike back but we were saving that for the next day as we had Mount Urgull planned.

The day started off pretty regular as we attended class and had a free afternoon until we had to meet for 6 pm. As we arrived at the shared location we could already see the incredible views of the mountain with the statue of Jesus poking out at the top. The mountain is surrounded by one of San Sebastian’s beautiful beaches filled with people on this hot day and we were all excited to see this as a part of the view from the top. 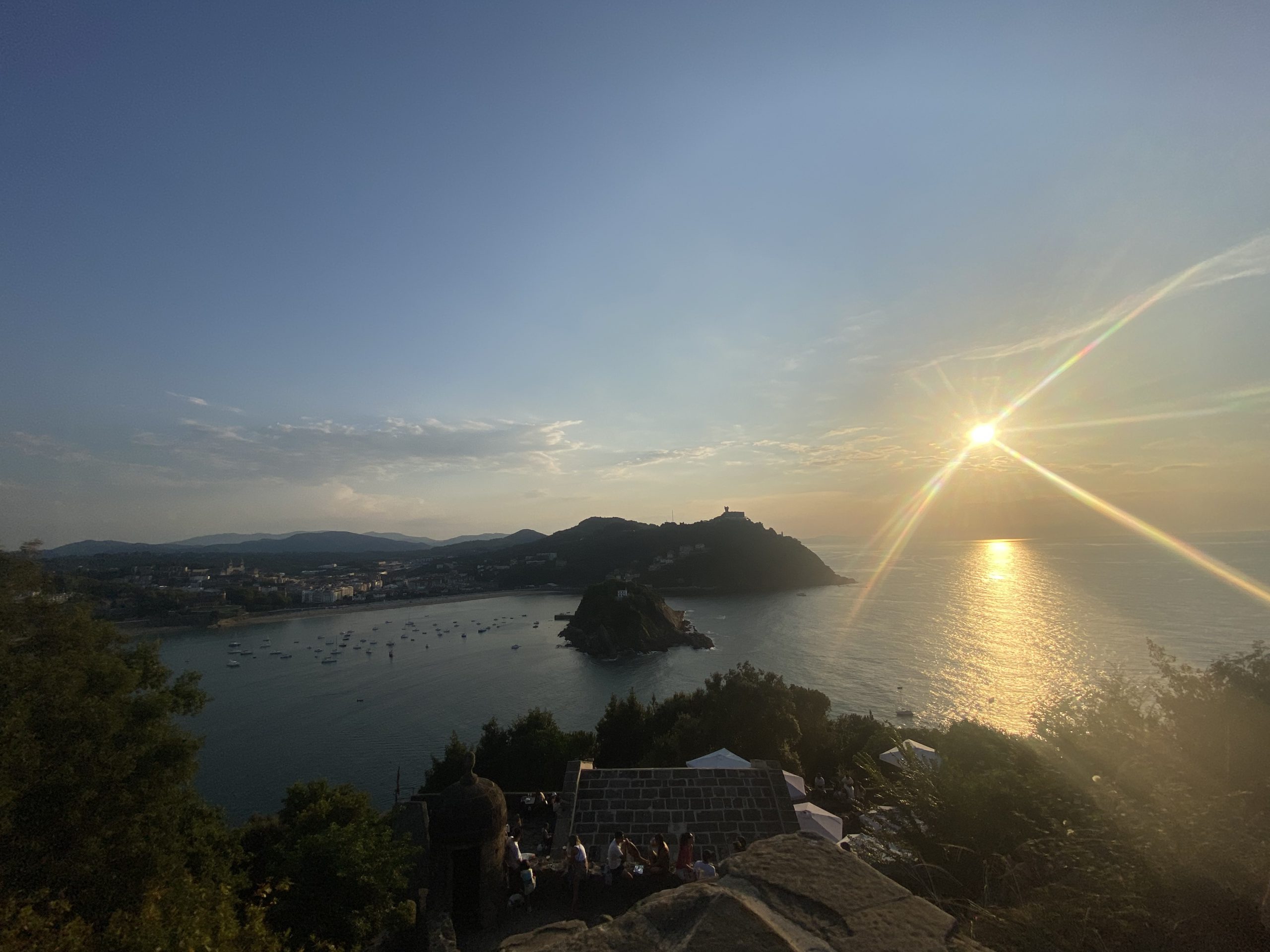 The slight hike up this mountain consisted of a slight detour of going up stairs instead the steep uphill paved road. As many of us were huffing and puffing as well as losing some members we all made it to the top with the outstanding views of the forest and beaches along the way. When we reached the top, we came across the bottom of the statue and many canon replicas. I definitely had some questions as I had never heard any history about this part of the Basque Country and was curious to know more.

Professor Z was ready to answer as I asked the most basic question there is “so why is this here, what’s the story?” He began to explain that the statue was created in 50s, during the Franco dictatorship. Prior to this, the structure was a fortress. As San Sebastián just use to be the old part, this was built to protect against attacks from the sea and land. However, after the Spanish civil war, who ever had power was most likely supportive of the Franco regime — so religious iconography proliferated at this time, including Jesus atop Mount Urgull.

As we finished up hearing about some Basque history of the Franco dictatorship we made our way to the museum 6 minutes before closing. We did a quick look through of what they had in which it mostly consisted of the history of boats and voyages made. The Basques use to rely heavily on whaling in which the whale was referred to as the pig of the sea and every part of it was used. They were identified by their geysers in which those waiting at the towers would notice and send a signal for a boat to go out and harpoon the whale. The Basques began to travel further into the sea for whales as dehydrating cod had allowed them to do so because it could be preserved and stored on longer trips. The whole whaling process was very brutal as they bleed the whales out and dismembered them but sometimes the whales would win as they’d flick the passengers, or break their ropes. However, this was the price they were willing to pay because if they were successful in getting a whale it made them rich. This business led into being one of the early forms of investment and capitalism, as they needed help financing the ships in which they got investors.

As we finished up the museum we made our way to a nice spot where the other students and I sat down to have a discussion about the book All That Followed by Gabriel Urza. We discussed how the book tied into Basque history as it was not a true story but was written on real events that took place in the Basque Country. The book was a good introduction to Basque culture and history that allows outsiders to get a taste of how much there is to know. One interesting historic fact I learned was that speaking Basque was prohibited many years back; meaning there was a huge loss of culture for the Basques. The Basques are very proud of their history, culture, and language because they fought so hard to keep it alive through everything that happened to them in the past.

Brushing upon Basque history by connecting it to the book was a great introduction of what’s to know about this beautiful city and it’s upbringing. There are many gorgeous sites to see and the view and stories from this hike are definitely not one to miss.