When I applied for the San Sebastian Honors study abroad trip with UML, my objectives were to travel to Europe, see a new country with other students, learn about the culture, and practice Spanish. What I didn´t realize was all the perks that come along with experiencing language school while studying abroad! Here are three perks of studying Spanish while studying abroad in Spain! 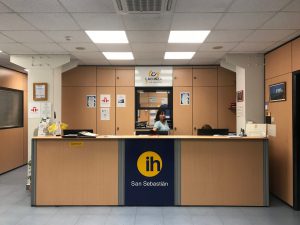 Lacunza´s reception desk, upon entry of the school

No matter what your level, beginner through advanced, you will be taught Spanish by a native of Spain while here at Lacunza. Since I entered this school with some former experience in Spanish, my favorite aspect of having native teachers is that it is possible to get answers to very detailed questions regarding grammar and colloquial speech. For the more beginner learners, this means that your professor will always use Spanish with you, and use English as little as possible in the classroom. This ensures that you get the best instruction possible, and get every question answered! My teachers are native Basques who were born in the Basque country of Spain, and can also teach about the culture of this region, a subject that is best to learn from natives! 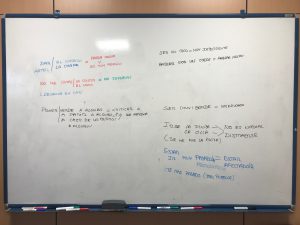 2. You live your homework every day.

Even though you are assigned paper homework by one or both of your teachers to complete for the next day, there are endless opportunities to practice Spanish in between. Many studies on information retention have concluded that memory recall is one of the strongest ways to reinforce that information for long-term memory. If you put yourself up to the challenge, you can recall and reinforce vocabulary, phrases, and mannerisms when ordering food, chatting with your teachers, making conversation with your host family, or even amongst your UML classmates! 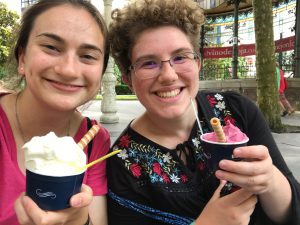 Me and Hannah with delicious gelato which we ordered — you guessed it — in Spanish!

When you take the entrance exam at the language school, you are placed into a learning bracket with other same-level students that have expressed a similar learning preference as you (grammar, vocabulary, conversation, etc), and most importantly who have come to learn Spanish, just like you! These students come from all over the world to learn Spanish; students in my class of 12 hail from Sweden, Switzerland, Germany, Japan, Korea, China, and the United States–  this makes for an incredible cultural exchange! Additionally, many have similar mindsets and talent/experience when it comes to learning new languages and travelling the world. In a recent class exercise, I and a Chinese classmate discussed our life dreams (deep stuff! ;P), who said she wants to travel the world– and many expressed similar interest! 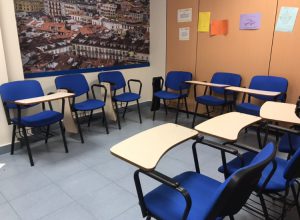 A typical classroom — not more than 12 students per class!

When I signed up for this three-week study abroad I had no idea about how rich the experience of language school could be! These three perks of Spanish school in Spain were a very nice surprise, and will be a part of my life forever! If this sounds like an experience you´d like to have, make sure the program you´re selecting has a language school component. You won´t be disappointed.

The Lacunza Language School of San Sebastian is one school in a network of 20 in Spain, and more than 160 in the world associated with the International House organization. Check out their website for more information! 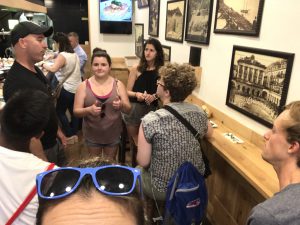 As I live and breathe in the air of San Sebastián, I learn more and more about the Basque culture every day. On Wednesday I learned the most about pintxos, the most commonly found kind of food here in San Sebastián—through a food tour.

The word “pintxo” in Basque comes from the Spanish word “pinchar” which in English means “to puncture” or “to prod.” A pintxo is most classically known as a stack of food skewered with a toothpick to keep it all together, or more generally, a snack-size food featurette that costs 1.5 to 6 € apiece. The custom at lunchtime (1-4pm here in San Sebastián) Is to have a pintxo or both a pintxo and a drink at one bar, then move onto the next bar for your next pintxo and drink, typically 3 to 5 times for a meal or until you are full.

Bar-hopping at lunchtime in San Sebastián does not carry the same connotations as it might in Boston. Firstly, the food is of world-class quality (https://bit.ly/2mtR3ie). Secondly, the social atmosphere and expectation is such that it is quite normal to eat one pintxo at this bar, another at the next, and finally hop a couple streets over to visit your favorite bartender at another. Some will have a drink with their pintxo at the bar before moving to the next bar. Some will run into a friend and have a chat. Most will bring friends and have a great time all the while. The atmosphere is very social, open, and inviting: grab a pintxo, enjoy, and pay before you leave.

The way you can spot a good pintxo bar is either that (1) It’s so crowded that you can’t even squeeze in, or (2) It has a plethora of crumpled up napkins on the floor. While number one is somewhat self-explanatory, number two calls for a bit of an explanation. A casual American tourist could easily think that napkins populate the floor due to sloppy patrons, but this is not the case. When you have eaten a really good pintxo, you grab a napkin from the dispenser (a small slip of paper), wipe your greasy fingers, then toss the crumpled napkin on the floor. This token indicates that you’ve enjoyed the bite you had to eat, and the accumulation of such tokens serves as a sign to others that they might just want to stop in. Of course, if I bar is incredibly crowded and ALSO has tons of napkins on the floor, you might want to plan on lining up there before opening time tomorrow!

OK, now to the good part; the part where I just play a plethora of mouthwatering morsels. Here are the top three out of the 17 pintxos from the pintxo tour we took today as a class…

1. Pork rib. This pintxo was a delectable treat at the Bar Borda Berri that arrived steaming with a crispy, caramelized layer on the outside. The golden brown crisp and the tender meat beneath paired incredibly with a piece of a fresh roll of bread.

2. Gilda. The most classic pintxo around, the Gilda is made of green olive(s), mini pickled hot peppers, and an anchovy, skewered together. It was named after the 1946 film starring Rita Hayworth, whose image on the movie poster has been described as “savory, green, and a little spicy” — thus this pintxo’s name.

3. Risotto. This pintxo was also a special of Borda Berri, and brought incredible flavors to the table. Made from Spanish rice and the milk of pasture-fed sheep. It was creamy with a delightful, rich, aromatic flavor. Drizzled over the top was a parsley-garlic olive oil which added a facet of fresh flavor to the aroma. 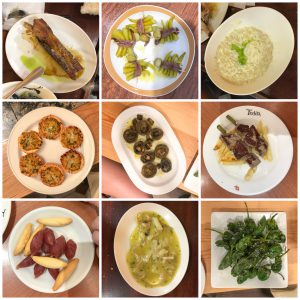 Though we all felt like Violet Beauregarde (Blueberry-girl from Willy Wonka) when we were finished, we stuck it out for some Basque Cheesecake and a Café Cortado to finish out the class. (A Cortado is a shot of espresso cut by a swift pour of frothed milk.) The espresso paired brilliantly with the light, fluffy cheesecake, and also ensured that I would not immediately be overtaken by a food coma.

Not only was this my favorite class in the history of my school career (fooood), but it was an incredible peek into the public food culture of the Basque Country, which treats food in a completely different manner than Bostonians. Though I realize that I will likely not be able to eat in this fashion for 99% of my life, I am grateful to have tasted 17 pintxos of San Sebastián with a group of other students also experiencing it for the first time with a knowledgeable professor at the helm. It is for these moments and experiences that I chose to study abroad, and it hasn’t disappointed yet!! 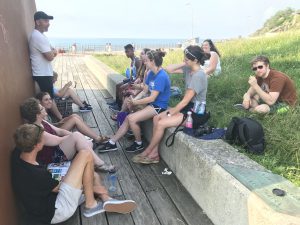 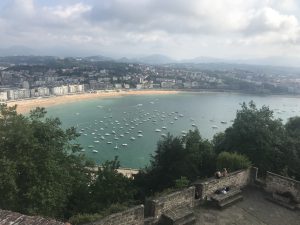 END_OF_DOCUMENT_TOKEN_TO_BE_REPLACED

Welcome to UMass Lowell’s Global Correspondent blog, where I will be writing about my study abroad experience in San Sebastian, Spain!

First, an introduction. I’m a native of Massachusetts, and a Junior studying Computer Science at UML. I am a commuter, and also love social activities; you can often find me involved with the activities of two or more clubs on campus! The top three reasons I decided to study abroad in Spain are that (1) I am young with very few grown-up responsibilities as of yet, (2) I love communication and want to be able to converse fluidly in Spanish, and (3) I want to see the world and compare Boston culture with other cultures.

Whether you are a student, a friend, or a family member (shoutout!) I hope you enjoy this lot of my adventures and while I am in San Sebastian. I appreciate you following along! 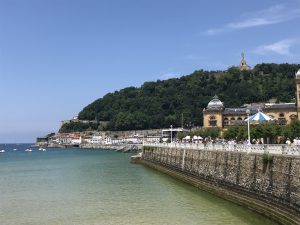 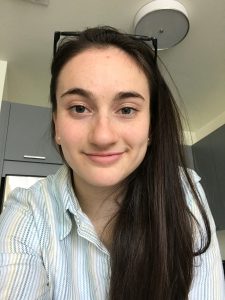 You can also read blogs from previous trips to San Sebastian listed below or from other destinations across the globe UMass Lowell students travel to.