The day of July 28 began with the usual weekday morning routine with class from 9:00-11.  This day was slightly different than the resr, however, because it was my first day back after missing the previous day because of sickness, and it was very difficult.  Sitting in a hot classroom for two hours straight was not the most enjoyable thing to do.  At my thirty minute break in between, I went outside and took in some of the fresh air from Donostia and drank some water.  I said to myself, “It’s only an hour and thirty more minutes.”  Feeling somewhat rejuvenated, I did my best to maintain a positive attitude and power through the remaining class time.  I do not know how, but somehow this positivity seemed to magically work as a cure, as the congestion and fatigue I had been experiencing suddenly vanished.  Even after class, I felt great.  I wasn’t going to let anything get in the way of my experience in the Basque Country.

After class, me and a group of friends decided to climb to the top of Urgull, or as we had been calling it, “Jesus Mountain” because of the large statue of Christ at the top.  I was somewhat reluctant to hike all the way up, as I did not want to make my illness worse, but we set out anyways.  After climbing up about halfway, the group and I came to a stop that had one of the most amazing views I had ever seen.  From where I was sitting, I could see La Concha and Ondarreta Beach, and a beautiful view of the vast Atlantic Ocean.  I’m not really a nature person, but this view was truly something to admire.  This view was so beautiful that I wanted to see more.  I turned around and there was this natural rock slope that I decided I could climb to get an even better look at the city.  And I was definitely right when I say that this view was even more amazing than the last.  After getting a picture from up there, we had one more stop, the summit.  After a long trek up, we finally made it.  I sat down and took in the amazing view of the city and said to myself that I would come back at least one more time before we left.  Unfortunately, after basking in the beauty for thirty minutes, it was time to descend.  We hiked back down and met up with Julian, Sean and our Basque Language teacher, Stewart, and made our way over to the bar where we would sit down and begin our first Basque class.

The class was only more or less an hour long, but Stewart had my attention every minute of it.  He was a hilarious guy, but at the same time a very knowledgeable person about the language he was teaching us and most importantly, a great teacher.  He taught us basic phrases we could use here as well as some historic culture about the Basques.  He even showed us a song in the isolate language that as soon as I heard it, I felt obligated to learn how to play it on the guitar.  As soon as I got home, I looked up the chords to the song even though I don’t even have a guitar to play them on yet.  That’s how much I enjoyed the song and the class.

What I initially thought was going to be a bad day actually turned out to be one of the best days I had in San Sebastian.  Looking back, the view from the top of Urgull really emphasized the true beauty of the city.  It reminded me of all the beautiful places and sights that I had seen in the city as well as in other cities I had visited in the past.  It was precisely these views from the summit that really made me change the way I look at the world.  They instilled in me a much greater appreciation for nature’s beauty that I am going to more carefully observe for the rest of this trip.  Similarly, the Basque language class also made me develop a deeper appreciation.  The class showed me that language can be tough to learn, but I cannot stop wanting to learn more and more languages.  I consider myself truly lucky to have been able to partake in the experiences I had this day. 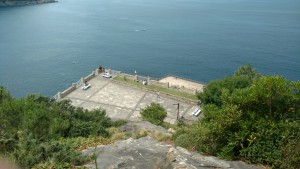 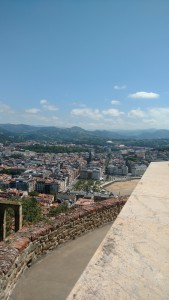