When traveling to a new country you are immediately given the title of a tourist. You become a stranger to the city in which you are traveling and begin to feel as if you stick out like a sore thumb. There is a sense of not belonging that comes with being a tourist that is hard to break especially in a country where you don’t speak the same language. Although this type of reaction was the initial feeling that I had when arriving in San Sebastián (and when we walked around in the traditional clothing while people stared at us) I have found that I no longer feel this way at all. San Sebastián has become a kind of home to me. I no longer feel like a stranger but instead I feel like it has become a city of my own. I love walking the streets and knowing exactly where I’m going. I love going into the same bar and having the bartender be so happy to see me. I love feeling embraced by this beautiful city and all that it has to offer.
San Sebastián makes even some of the simplest things in life seem beautiful and special. The night that we spent at the beach today became so much more than just a night on the beach with friends. It became a night of new friendships and memories that we will all never forget. While on the beach other people came over and joined us. We ended up making friends with people from all over the world; people from places such as Ireland, Brazil, Germany, and England. They shared with us their stories and we shared ours with them. Then together we all started singing while Spencer played the guitar. At that moment I realized how amazing of a memory I was actually creating. I was sitting with people of all different backgrounds, under the moon on a beautiful beach in San Sebastián with music that brought us all together. It was amazing that music is so universal that we were able to have this huge singalong with people from so many different places. This was something that many people would never get the chance to do but it was something that I was lucky enough to experience. Once the group singing died down I laid back on my towel and took everything in. The sand was soft and squishy underneath me and there was a nice cool breeze in the air. The street lights were shining brightly, lighting up all of the old buildings of Gros. The moon was casting dull light on us and I soaked it in as I laid there, like I would if I was bathing in the sun. I then closed my eyes and listened to the chatter and laughter of the people around me. The people who were once strangers, but had now become people that each of us would always remember. As I lay there I smiled to myself and felt proud to be a part of such a special experience. It became a night that I never wanted to end with people I never want to leave, and that feeling in itself is something that I will always carry with me and hope to be lucky enough to experience again. 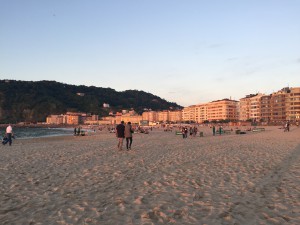