Who doesn’t love food? I am very much a food lover but have always been extremely picky when it comes to what I eat. I am a very visual person who normally would never eat anything that I did not know what it was or if it looked a little odd. Sometimes when I was told what I was eating I would also turn it down because it sounded gross and I was unwilling to even try it. I planned to change this whole attitude once I arrived in San Sebastián and I am happy to report that it was a success.
I came here with the goal of stepping outside my box to try new things, so when I heard that I would be trying a bunch of different pintxos with our professors so early on in the trip I was extremely excited. I knew they wouldn’t steer me wrong and this would give me the confidence to experiment with different pintxos by myself later on in the trip. We started off in a small bar in La Parte Vieja on the corner of two streets to have the original pintxo called La Gilda: an olive, peppers, and an anchovy on a toothpick. To say we were all pretty apprehensive about trying this is a bit of an understatement. But my friends and I all agreed to take the bite on a count of three and down it went. 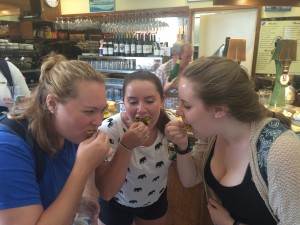 Our reactions varied but the pictures taken of us as the three of us ate this strange new food are priceless. We washed it down with a glass of wine and off we went to the next bar.
The second bar we went to was inside of a market. This is one of the things I love most about San Sebastián. You truly have to explore the city to find these hidden gems. However, it was the third bar that was my favorite of them all and I was happy to see there was a lot of trash on the floor. Now this may sound strange because who would be happy that there was trash all over the floor in the bar they are in? Well in San Sebastián that is actually an indication of how good the food is. When people use napkins while eating their pintxos, they throw them on the floor when they are done. There are no trash cans in the bars. Our professors told us that this is a very easy way to tell which bars are the most popular because a lot of people have been there and have thrown their napkins on the ground. If a bar has very few napkins then it is likely that the pintxos there are not very good.
Overall I really enjoyed most of the food that was placed in front of me. One of the advantages of choosing to write the blog for this day was I needed to take pictures of all the pintxos before we dug in which meant I always had first dibs on the food. The one pintxo that I will absolutely go back and have a gain before the end of this trip is the risotto from the third bar (and the cheese cake from the last bar but I’m don’t think that really counts as a pintxo). 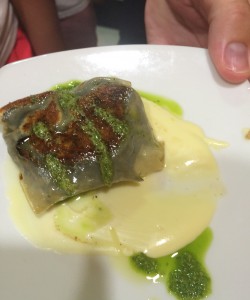 The only one that I had trouble getting down was the squid ink in basically a squid sack. I was one of the very few souls brave enough to try it and while I did not like it, I definitely don’t regret trying it.
I am so thankful for this trip because it is giving me an amazing opportunity to step outside of my box and really grow as a person. While it may have started with just the food, I think this is the first step to me trying a bunch of new and exciting things on this trip. My adventure is only just beginning.