Another day in France! Today we went to the Fondation Louis Vuitton and toured the building, along with the several floors of art. (Yay, more art!) the building was absolutely massive, I can’t even begin to describe how beautiful it was. It really was more of a sculpture than simply a building. It was meant to represent the city of Paris, which is why it appears to be very boat-like. I really liked learning about the origins of the boat imagery and how the Huns almost took over Paris. And the way that the building captured opposites within the structure was really cool— nature versus artificial, sturdy steel beams versus curved, elegant surfaces. The water around the building was collected rainwater, creating a more environmentally efficient structure as well.

Some of the art at the galleries were really great to see. I got to see Yves Klein blue! I still am not crazy about him because of the way he treated women but seeing the blue in person was exciting, it really is beautiful— almost entrancing. There was a pretty neat video called Nightlife by Cyprien Gaillard that was done really well. The video mixed audio and visuals really well and the 3D effect reminded me a lot of painting. The bits that came forward in the video looked like a layer of paint that sat on top of the rest of the painting. Super satisfying. Takashi Murakami was also exhibiting his work there but it really wasn’t my thing. The last room of his that we looked at was better because you could see the influence of traditional Japanese art and storytelling in his work but the other galleries really felt like they were primarily adhering to mass consumerism.

Anyways, after the Louis Vuitton Fondation we got lunch at a little cafe next to ISA. Adel and I split bruschetta with goat cheese honey and walnuts. I’ve already eaten so much goat cheese and I am so ok with it.

We wrapped up the day with a boat tour on La Seine and that was pretty relaxing. It was hot but there was a nice breeze toward the back of the boat. It was really neat looking at Paris from a different perspective. I think it helped me connect all the different spots we’ve been to so far as well. I feel like I really know where everythig is in relation to La Seine.

Lastly, France won the soccer game today! Everyone was celebrating in the streets and at cafes. It was so cool. I love that we’re here during the World Cup. There’s one more game tonight: Brazil vs. Belgium. I’m about to head out and watch the game! Woo! 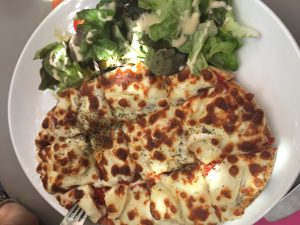 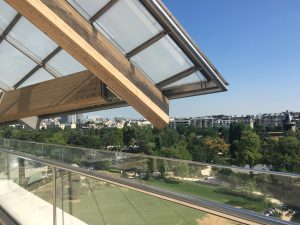 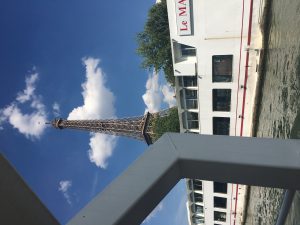