Today we started the day meeting at the ISA where we made sure to fill up on water because the day was going to be hot again. After we met up, we walked to the metro station chalet to eventually take the RER which is a fast train to where our bus tour would pick us up. On the way to the train station, we stopped several times to learn about history of the buildings and about the architecture. The first building we saw was the Conciergerie where Marie Antoinette was held in prison before she was decapitated. The next building we stopped at was Hotel Dieu. We learned that in France not all buildings that say hotel mean hotel where you stay for a night. The hotel we saw was a place where you can receive medical treatments. 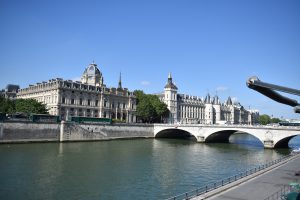 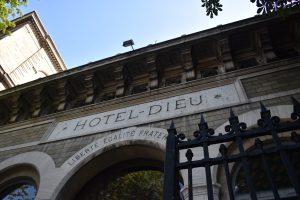 After that, we stopped by a Napoleonic water fountain and learned about French history. We learned that there wasn’t a lot of drinking water in France so Napoleon decided to make public water fountains for people to get their safe drinking water from. We talked about the architecture of the fountain with sphinxes from Egypt and an obelisk with a lotus design which also came from Egypt. We talked about how Napoleon really set up France and a lot of the organized France in this idea that he would conquer the world and France would be at the center of it. Napoleon set the standards for having one language because as France had existed up until the French Revolution, many of the regions of France were very isolated from each other and spoke different languages and dialects. After learning about Napoleon and the fountain, we got to the Châtelet stop and took the RER to where the open bus tour company was. On our tour we saw the opera, Palais-Royal, Musée du Louvre, Musée d’Orsay, Place de la Concorde, le Champs-Elysées, Arc de Triomphe, the Trocadero, the Eiffel Tower, la Madeleine, and many more. 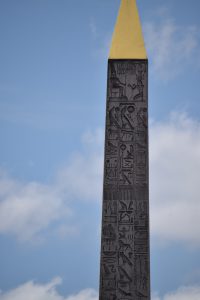 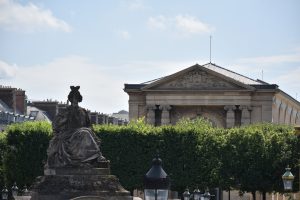 After we finished our bus tour, we had free time to take more bus tours or eat. I went to a restaurant that had pizza and burgers but more importantly had air conditioning. I ate a salad and for dessert, a crème brûlée. This was my first time having one and it was so amazing. After that, we went to the Champs-Elysées to go shopping and to specifically look for a France soccer jersey. 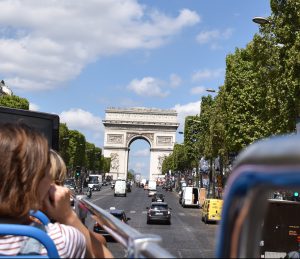 After this, we went home and until dinner I had slept because the heat had exhausted me so much. At dinner, we ate lamb, rice, tomatoes, and bread. For dessert we had fruit and yogurt. We talked at dinner about how the food is much different in France than in the US and how things taste better here. We also talked about our plans for traveling on the weekend along with learning a little bit about French laws surrounding police, military and guns.