You can’t visit England without spending a day in Bath! The architecture (most of the buildings are built with bath stone which is very yellow hued) and history is something that needs to be experienced.  Especially the Roman Baths themselves! 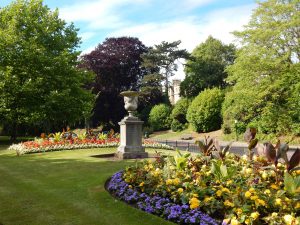 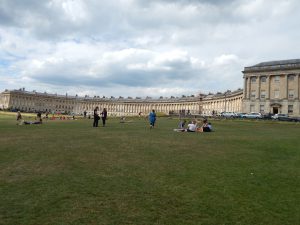 We took a nice walk through the Royal Victoria Park before we reached the Royal Crescent.The Royal Crescent consists of 30 terraced houses, which are not cheap to live in. In front of the building is a ha-ha, which is a special ditch that’s one side vertical stone and the other sloped turf. Our tour guide said it kept cows out of the people’s windows. 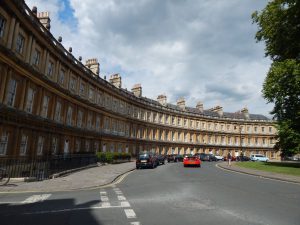 Next we walked to the Circus, and unfortunately not the type with tents and acrobatic feats. This was literally a circle of buildings with 4 exits. So a roundabout I guess. The buildings were 3 stories and between the windows was a tribune to Greek architecture. Each story featured pillars of the three styles. I don’t remember which order the guide said they were in, so I guess that’s just another thing for you to go see! 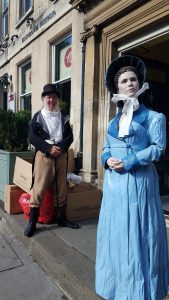 When we were given time to go off by ourselves before the tour of the baths, I wandered down to the Jane Austen Centre. The museum was closed but the gift shop was open! Outside the museum was a figurine of Austen and a guy dressed as Mr. Bennet who meets and greets visitors. (I’ll admit having to look that up. I actually haven’t read any of her works. I went to get my friend a gift because she likes them. All the staff is dressed up as Austen’s literary characters. You can meet them here: https://www.janeausten.co.uk/the-jane-austen-centre/jane-austen-staff/) 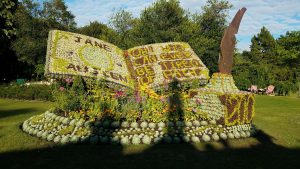 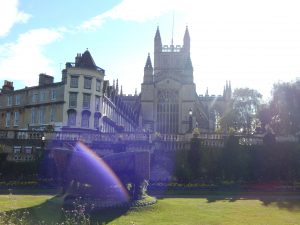 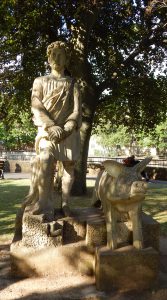 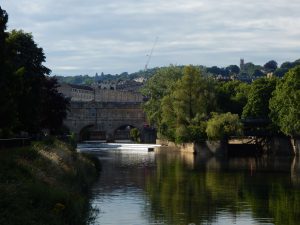 I spent about the hour before our tour of the baths in the Parade Gardens. For 1.50 GBP I got to walk around and read in a beautifully done public park. There’s a gazebo (I guess they must have a band there sometimes) and benches and lawn chairs. There’s statues too. There’s one of a pig and a man. Along the garden is an avon (a river). Technically there are many avons, but only one named Avon River. (Hilariously translating to River River). 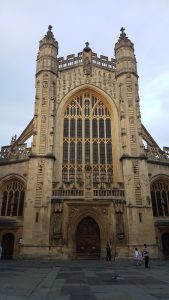 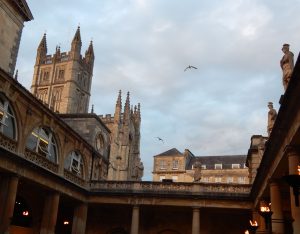 Bath Abbey and the Roman Baths. There was a guy outside the Abbey giving ghoooooost tours! We didn’t actually go inside the Abbey, but we did get to appreciate it’s architecture. The Abbey has been around since the 7th century.

The water inside the bath is untreated, so you can’t touch nor drink the water. (I don’t know why you’d want to drink water people bathe in?) There is a pump room that you can drink the water from. It was closed after the tour and I didn’t think to go in it before the tour, so your guess on the interior is as good as mine. There’s an audio tour of the baths filled with all kinds of history of the making of the building and of the culture of Romans. There was even two guys dressed as a gladiator and clergyman. (I’m actually not too sure of that one, I didn’t go talk to him, just the gladiator. Hey, the meeting time was almost upon me!) It’s a great place to visit, so make sure to add it to your itinerary!

(In real time, I’m halfway through my last week! Not as much travelling as I get ready for my presentation, but I still have pictures from the last week to add. So no need to worry. Plenty of content is on it’s way!)