Alright! So it’s actually been 4 days since I’ve been on my own at the college. The last few days have consisted of moving in, exploring, orientations, and making friends! It’s going to be busy now. I have class Monday through Friday from 9:30-13:30 (yes, I am trying to get used to military time!). Compared to some people I’ve met, this block is good. I don’t need to wake up too early and I still have a good amount of time to do stuff if I want. Already I have plans to go to Bath, to go see Matilda and the Lion King (both musicals), Shakespeare’s Twelfth Night and a end of the session boat party! That’s all through the school too. I already am looking at local things to do like Westminster, St Paul’s, and looking at the parks and monuments. Before a lot of these events through the college, I plan to head to the meeting points really early so I can look around the neighborhood since the events take place outside of Bloomsbury. I do need to make sure to study hard! I am super excited for my module, climate and energy! We got the schedule today at UCL orientation and the lectures are very interesting sounding.

Alright let’s get started on some pictures!

The Gardens Hall, 1 Cartwright Garden. It’s a really nice hotel/apartment like residence hall. There are regular tourists as well. I do have a little single room which is great for my late night blogging… (whoops). But it is kind of weird considering I’m used to dorms and roommates and common rooms and shared bathrooms! Though the last one is kind of nice to have private. I did meet two nice people who work with this group called London Nest. They plan some events within the building for students since we are all here for different reasons. It seems I’m the only one residing here that’s part of the UCL Summer School. Most of my day was unpacking and shopping for some other living essentials. It was a more relaxed day and if you saw, I did manage to check off two of my late blogs. (Brussels will come soon, I just felt I needed to update ya’ll on how my first few days have been before classes actually start) 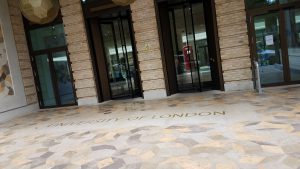 My first orientation was with all the other kids who are doing their study abroad through AIFS. I met Kelsi who’s also doing a UCL course! My course too! She’s staying both sessions however. She’s going into her senior year at University North Carolina: Wilmington. I was the youngest one there I think, most everyone else were seniors or just graduated! Oh, everyone else was studying through Richmond University. 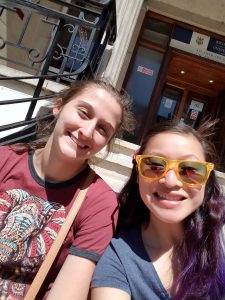 After the meeting, we had a bus tour around London. Not in a double-decker unfortunately. I’ll have to remember to ride one of those these days, maybe when I go visit St. Paul’s Cathedral again? Which brings me to the point that we stopped at St. Paul’s, Westminster Abbey, and Buckingham Palace! 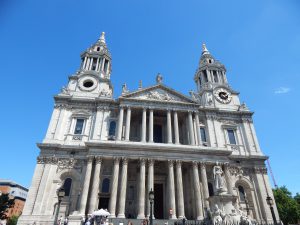 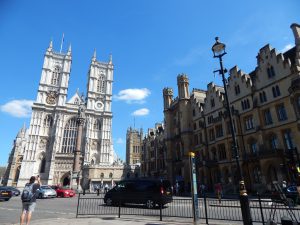 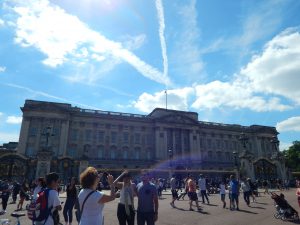 It was a tiring day. Kelsi and I did walk around UCL’s Bloomsbury campus a bit since we needed to be there the next morning for enrollment/orientation.

I live 10 minutes from campus! Literally the closest of any residence. Everyone else seems to be staying at St. Pancras or East Side something. The only problem is it makes it harder to hang out with all the great people I met during UCL’s orientation. At least there’s classes and the school’s events. There’s so many people from Australia, Hong Kong and the States. There’s also been people from Spain, Canada, and China. It’s quite amazing the international diversity! Oh, I also made it known that I will be one of the loudest small persons you ever meet. Some of the presentations for orientation were multiple choice answers and I made sure to “speak” extra loudly the answers! 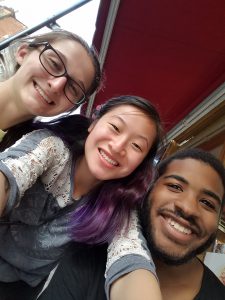 Kelsi, me (Lily) and Scotty! All from the USA! (NC, MA, and TX respectively!) We had just finished lunch.