The Louvre was really amazing. There are so many exhibitions, and like any other huge museum, it’s impossible to visit every exhibition and enjoy each one fully. We saw Greek and Roman sculptures, some Renaissance paintings, and a room dedicated to Louis XVI (The Sun King).

There were six of these statues long the door way to the exhibit of Roman sculptures. It was also one of the more clothed pieces of art within the Roman and Greek exhibitions. I kind of forgot how much nudity there was in their sculptures. 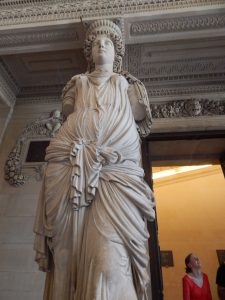 The Venus de Milo statue was a very popular exhibit. It had it’s own space within the Greek sculpture room. There were many sculptures of Greek gods and goddesses. There was even a interactive screen where you could learn about certain symbols that are associated with them.

The Mona Lisa was what my mom was most excited to go find. Found on the 1st floor of the Louvre (in relation to the facts that there is a -2, -1 and 0 floor… it’s Europe after all.) There are signs that help point tourists in the right direction. Within the room itself, it holds it’s own place on the far wall. There are many other Renaissance works hanging on the walls, but everyone crowds around the Mona Lisa. It is covered behind a large glass panel and hangs behind a red velvet rope, likely to prevent any more thieving crises. The Renaissance art is very Christian inspired. The differences between the art of Roman and Greek times is vast. Earlier art consisted of sculptures and ceramics. The Renaissance was more of a time of paintings. 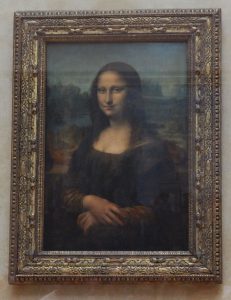 The room dedicated to Louis XIV was themes around his epithet as the Sun King. The engravings long the ceiling were of the astrological signs. My sign is Gemini, and thus I included that picture. I think it’d be too much if I included all of the signs. You should go to the Louvre to find the depiction of your astrological sign some time. The room is beautiful in all it’s golden plating. There is even a display of the crown jewels. 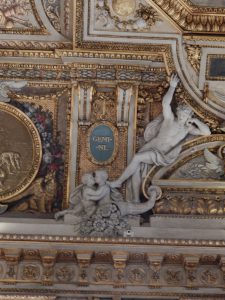 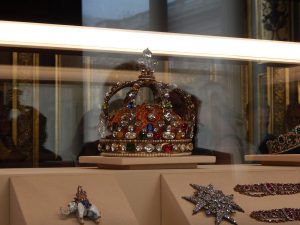 Going under the pyramid gave me the opportunity to do some really cool photographic shots of the building round me. It was like a greenhouse however due to the glass and the intensity of the sun! 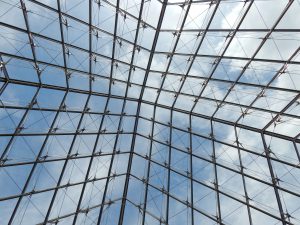 The front of the Louvre is very beautiful with the old architecture, glass pyramids, water fountains and the Arc de Triomphe du Carrousel (not to be confused with the bigger, famous Arc de Triomphe). The day was so hot, that people and ducks were dipping their feet into the fountains! I took partook mainly for the picture of it. 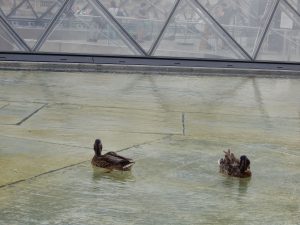 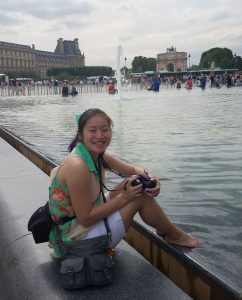 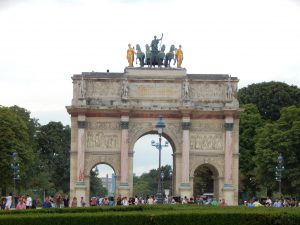 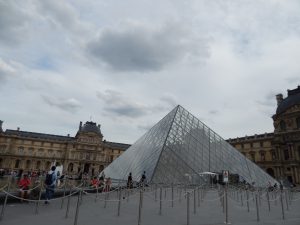 Also, I did tell you that the couple we saw by the Eiffel Tower weren’t the only ones we’d be seeing on our adventures through Paris (The City of Love!) 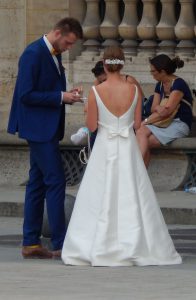 We spent so long at the Louvre that we unfortunately missed the artists’ stalls at Montmarte. We did go and eat at a nice restaurant and the Sacré-Cœur Basilica (Basilica of the Sacred Heart of Paris) was a lovely place to visit.

La Pierrade’s had a nice outdoor seating area though there were a lot of motorcycles and scooters passing by. (There’s so many of them in the city). I ate lamb shoulder roasted with thyme for my entree and a lemon tart as my dessert. (The tomato had balsamic vinaigrette nicely drizzled on it, but I had started eating before I remembered to take a picture) 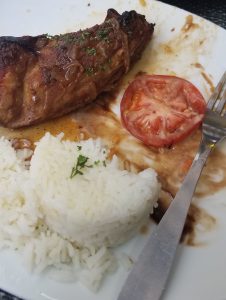 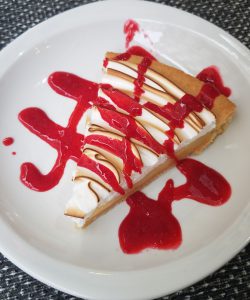 Located on the summit of Monmarte, it offers a beautiful view of the city. Rather than walking the 300 steps to the top, we took one of the two funiculars that are at service. For the same price as a Metro ticket (1.90 Euros), a person can enjoy a good 1.5 minute ride up and down the hill.

(Heading down in the picture) 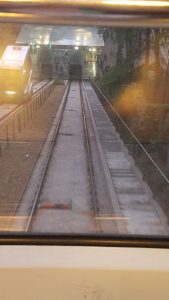 The Basilica and the view from it! 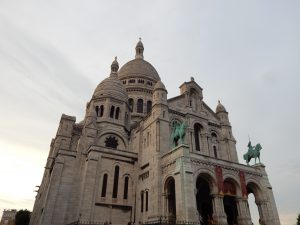 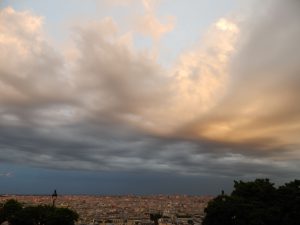 Picture taking is not allowed inside due to it being a place of worship and peace. So go visit it yourself when your in Paris!