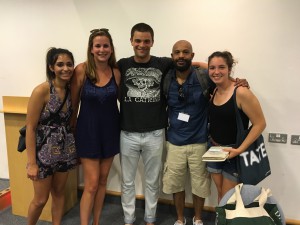 Yesterday, I was able to visit the British Library to see an exhibit called “Shakespeare in Ten Acts”. It was interesting to see Shakespeare’s first folio, and some of his other works presented in a style that coincides with Shakespeare’s time. I was able to see props from performances, like a cannonball, which were used to imitate lightning when scenes called for inclement weather. Although seeing the props and original texts were interesting a component of the exhibit that caught my eye were the costumes, specifically for a 1970’s adaptation of A Midsummer Night’a Dream.
In one of the last exhibits, I came across 4 photographs of the costumes used during this particular production. As I read the description for Desdemona’s spotted dress I noticed an immediate connection to the tie dye style, which in recent years has once again become popular (does tie dye ever really go out of style?). As I continued reading, I noticed that in one of the descriptions that the entire costume choices for that particular interpretation of the play was the style of the 1960’s. It was really amazing to see the choices the costume designer made for this particular production. Generally, when I think of Shakespeare the fashion that comes to mind are frilly collars, dark colors, and modest gowns. So basically a much for rigid and formal sense of style. That’s why when I saw another sketch that included multiple red feathers surrounding the actress (I forget exactly which character) I was completely shocked. Now I must admit, A Midsummer Night’s Dream is totally different then say Macbeth or King Lear, but I generally associate Shakespeare with formality. When you google A Midsummer Night’s Dream, many different styles emerge when you take a look at various costume choices. It’s amazing to think that Shakespeare, a man who has been deceased for 400 years, could have connections to the fashion of 1960’s. With Shakespeare it seems that you never know what you’re going to get.

It’s hard to believe that someone could still be making an impact 400 years after their death. Throughout London, I have seen glimpses of Shakespeare’s impact on England. Over the past few days in this amazing city, I have seen his plays recreated for young children at a local book market, banners of Shakespeare’s face on poles, and have seen countless tourists (myself included) snap a quick photo of the iconic Globe Theatre.

There is clearly a devotion to William Shakespeare here in London, and it is no surprise that he is also memorialized in Westminster Abbey, despite his being buried in his birthplace of Stratford-On-Avon. Many other famous writers are remembered in the Poet’s Corner of Westminster, such as C.S. Lewis, the Bronte Sisters, and Percy Shelley, but their shrines are nothing compared to Shakespeare’s.

Shakespeare’s shrine is a remarkable addition to Westminster Abbey. Although his memorial is surrounded by many impressive writers, Shakespeare’s is front and center and appears to be on a pedestal. Shakespeare’s figure leans against a stack of three texts, representing not only his wealth of knowledge but also his contributions to the literary world. He was the only member of Poet’s Corner to have a dedicated audio channel, and his remains were almost relocated to Westminster a century after his death. Also appearing on his statue are many faces, and his finger points to a scroll with text, symbolizing his importance and contributions to the written word.

It is undeniable that Shakespeare has had and will continue to have an everlasting on the literary world. Each year, his works are interpreted and imagined by those on stage, in classrooms, and in film reproductions across the world. His contributions leave me wondering if Shakespeare, himself, would ever believe that 400 years after his passing that his works would continue to be celebrated, appreciated, and memorialized in a location as iconic as Westminster Abbey. Despite the fact that there is no photography/video permitted within the Abbey, I know that his presence in London (and worldwide) will continue to be everlasting. 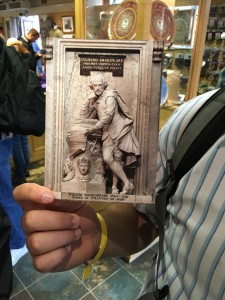