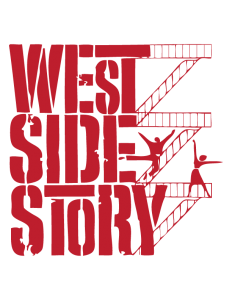 Today we find Shakespeare in everything; poems, Netflix series and movie plots. This prominence of Shakespeare begs to question what his original really is and what works are total remakes or interpretation. After Act 4 of the Ten Acts of Shakespeare, at the British Library, it was clear what modern motion films were influenced by Shakespearean work. While many, like Kevin Petersen, are more of fans for Shakespeare’s original written work, many of these motion pictures have won global film nominations.

What stuck out to me the most was the West Side Story movie poster because it was my earliest encounter and understanding of Shakespeare in the third grade. When my music teacher was out for the day, my substitute teacher put on a musical to entertain the class. It was not until high school, I realized this film was much deeper and influential than something to stall music students as their teacher was away, but a production that had been remade from material created about 400 years prior.

The dedication to Shakespearean influenced and play interpreted modern motion film posters through out the Ten Acts Exhibition high lights the on going devotion and impact of William Shakespeare. 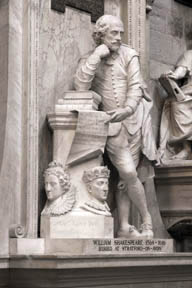 The Westminster Abby encumbers the bodies of many famous historical figures dating back to the 1500’s.  Among these historical figures include: Queen Mary I, King Henry V, Katherine de Valois and Isaac Barrow. And although many bodies are buried in the Abby, there are also memorials and sculptures commemorating other historic influencers buried outside of London. As one heads towards to the South Transept of the Abby, the Poets’ Corner featuring William Shakespeare is found. Among the other poets featured in this corner include: Charles Dickens, Jane Austen and Geoffrey Chaucer- all whom are internationally known and recognized.

Today, it is no surprise to find historic poets amongst British royalties and noblemen given the Brit’s vast appreciation in the arts and literature. Although William Shakespeare is buried in his hometown, Stratford Upon Avon, there is a strong devotion to him in the center of the Poet’s Corner where there is a large marble sculpture of him leaning on books and draped in fine clothing. As one arm is leaning against a pile of books, the other is pointing at one of his last passages in Prospero, which is believed to be “his farewell to the world”.  Shakespeare’s statue gazes right across where actor, Laurence Olivier’s tomb lies. The sculpture’s gaze symbolizes Shakespeare’s ( and the world’s) acknowledgement and appreciation of Olivier’s work in recreating Shakespearean plays.

Shakespeare’s work is globally known and recreated, meriting Shakespeare’s prominent presence in Westminster. Whether “to be or not to be” as richly dressed or appreciated when he was alive as he is now, we can see that this is made up through the detailing in his sculpture located in the Abby