When I first heard that we were going to be leaving the scholar’s house at 6:30 a.m. for a field trip, I’ll admit I was less than excited. I didn’t know much about where we were going, only that it was some sort of large kitchen. We travelled by bus and when we arrived we all removed our shoes and entered a large reception area where the tour guides began to explain the mission of Akshaya Patra. According to their presentation, many of India’s underprivileged children attended public government schools. These schools did not provide food to the children and many were unable to afford food of their own. This led to thousands of underprivileged children skipping out on school because they were too hungry, and as we know, education is one of the most effective ways to break a cycle of extreme poverty. This is what inspired the founders of Akshaya Patra, making sure that no child is deprived of education due to hunger. The Akshaya Patra foundation is a non-profit organization that is essentially a series of enormous kitchens that cook hot food for all the government schools in their surrounding area. For some of the children that attend these schools, this food 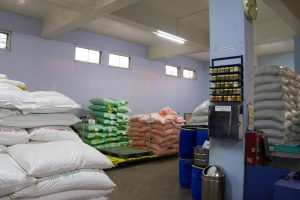 will be the only thing they eat all day. Our tour began with the dry storage room. There was an impressive store of several tons of basic food ingredients. They then showed us a large device used to clean the rice. The guides explained that the government of India actually provided the rice to them for free, but it was the lowest quality of rice, and contained bits of metal and other impurities. But by the time the rice reached the end of the magnificent cleaning machine, it looked good as new. 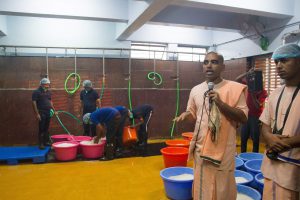 We got to see the top floor where the rice and vegetables were prepared for cooking. The entire room was filled with thick steam from the rice cooking below. One of the things that struck me most about this facility was how hygienic everything was. In this stage of the production all the rice was thoroughly washed and even the raw vegetables were rinsed in chlorinated water to ensure food safety. Not only were these people giving children a meal to eat, but one they knew would be safe and clean. Next, we got to go to the heart of the building, the kitchen. This Akshaya Patra kitchen in particular was known for being the largest kitchen in all of Asia. The room itself consisted of at least a dozen of industrial-scale pressure cookers. On one side of the huge room rice was being cooked, and on the other, was sambar. I was totally blown away just looking at the literal tons of rice being processed. As I watched the workers empty the cooked rice out of one of the cookers, it looked like each massive scoop could feed a family for a week. 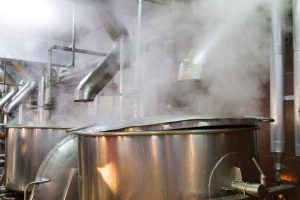 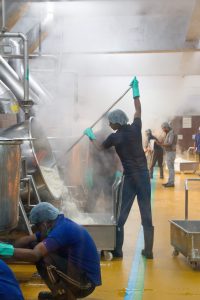 The kitchen was said to currently serve around 150,000 children in the area but had the capacity to serve up to 250,000. I thought this was very forward-thinking to have an operation like this be so scalable if the need should arise. After the kitchen we went outside to see the hundreds of trucks that took the food to schools all over the area in time for lunch. At the end of the tour they saved some rice and sambar for us to try. I have to say, I was VERY impressed! The food was delicious! Just goes to show you that food made with love tastes much better. 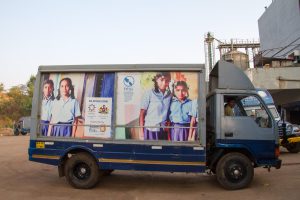