When I was in Agra, people referred it as Lohri, back in Hubli it is referred to as Sankranti, and I have learned that there are a few other names in other parts of India such as Pongal and Sukarat. For me the festival started after our class finished our dinner at the lovely Clark Shiraz hotel in Agra. It was still early in the night, so me and my classmate Jen went to explore the hotel, starting at the outdoor pool. From the pool we spotted a large, well-constructed bonfire. We were kindly invited to join the people at the bonfire, who turned out to be a film production company on a company outing. Soon after we were all given popcorn and peanuts. As per tradition, we all danced around the fire and threw the food in. It was explained to me that this was an offering to the fire god to bring a good harvest for the next crop cycle. I found this to be such a very fun and festive tradition. The next day we left the hotel to begin our journey to Jaipur. Once we finally got to Jaipur I could see that festivities were far from over. The holiday was being celebrated as a kite festival. We arrived at a jewelry store and after a quick visit went to the rooftop of the tall building. When I got to the top and took a look around I was amazed. Everywhere I looked there were people out on the rooftops flying kites. Thousands of kites filled the air from every direction. I had never seen anything like this before, I had not been used to such incredible participation in festivals, I feel like this sort of event would never have been possible back home in Mass. Even I tried flying a kite up on the rooftop, but without much success. Looks like I’ll need to get some practice before the next festival. We went back to the hotel after some time. After checking into our rooms and having dinner we decided to go explore the rooftop. Once we got there we could see that this amazing festival was not over yet. By now it was dark, and all the kites were now replaced by sky lanterns and fireworks from all directions. There were even more fireworks than when we had New Years in Hubli! I returned to the rooftop later in the night and got to see sky lanterns continue to pass over me. The whole festival experience was incredible. It was really one of the things I loved about India. Everyone getting together with friends and celebrating around a campfire, on the rooftop with kites, and even at night again with fireworks and lanterns, with your entire city participating right alongside you. I’m so grateful I was able to experience this festival during the trip. 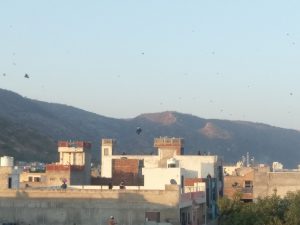