One of my favorite weekend activities was our trip outside Hubli rural Karnataka. There we found the hidden gem, Rock Garden. All I had known about this place was that there was a mud bath, which had been previously discussed and I was strongly looking forward to. We arrived at first to a barren looking parking lot that was seemingly in the middle of nowhere. We then lined up in front of a cave and when we got through, I could tell there was much to see at this hidden park. First, we were greeted by dozens of statues of Karnataka’s own Rajkumar. Although I had never seen one of his movies, I could tell from the statues that he must have been a talented actor to play so many different roles. I soon found out that this Rock Garden parks claim to fame was having a world record for most cement statues. With that in mind, the detail and accuracy of the statues was quite impressive. I was reminded of the detailed wax figures I had seen at wax museums back home. After the beginning of the park which contained more famous figures of Karnataka. The park transitioned into statues and scenes that depicted traditional village life of Karnataka. This was my favorite part of the trip. Since I had spent my whole trip in urban areas, I had little perspective on rural village life, and I wanted to see as much of India as I could. Granted I understand that much of what I saw would be a somewhat outdated view of what village life is like in the 21st century. 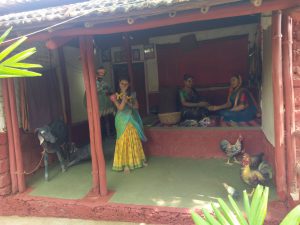 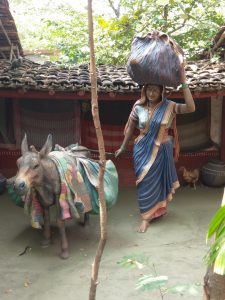 But nonetheless it was a great learning experience. After hundreds of statues and a paddleboat ride, we finally arrived at the main event, the mud bath. I decided to get things started and jump in first. The cool mud felt very refreshing after spending the whole day in the sun. As we learned in one of our in-class videos, it only takes one person to start a movement. Soon after the first couple of us went to start playing in the mud, many others soon started to join us. Each new person was welcomed with a typhoon of mud splashed from all sides. Soon almost our entire group was splashing around in the mud. Even people who originally said they wouldn’t participate in the mud bath eventually joined in. Except for all the dirt I got in my eyes, it was an incredibly fun experience. After we were done in the mud there was still more fun to be had. What better way to wash all that mud off than with a rain dance! By the time we were clean and tired from dancing, we all got changed and started heading back toward the bus. For us foreign students, even this was an exciting experience. The Rock Garden was being visited by hundreds of school children, and apparently, they find foreigners very interesting. As I walked back from the mud bath it was hard not to feel like a celebrity, dozens of children were running up to us asking what are names were and wanting to shake our hand. At points it actually got a bit hectic, but we all made it back okay. Rock Garden was the perfect Karnataka weekend trip and I would be happy to go back. 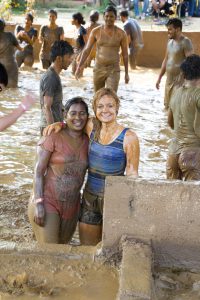 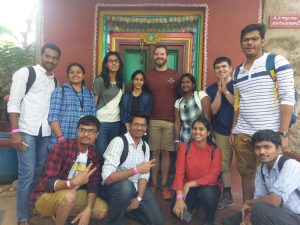 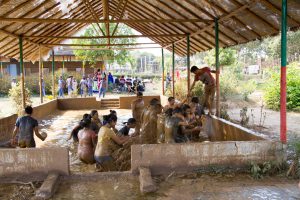