n Tuesday afternoon we were very fortunate to meet and talk to the Dean of Nursing at Universidad de Catolica. We learned that their nursing program is 5 years and there is a HUGE focus on science… and we complain about our 4 year program. We discussed the curriculum and learned that they have similar clinical rotations and that their 5th year is a unpaid nurse residency. Currently there is no nationally recognized nursing boards but it is in the developmental stages. Class size is small with a max of 35 students in a (large) lecture, and there is a 1:4 faculty to student ration during clinical. We toured the classrooms and were surprised that they had simulation models due to the expensive price. The rooms were also equipped with smart boards and lecture capture technology. Come to find out the nursing department received a large government grant.
We continued our tour and ventured to the anatomy and physiology lab where we were once again shocked by how advanced the labs were. The labs contained numerous models and diagrams, but what was most surprising was the adult cadavers and fetuses. The anatomy professor was very accommodating and enthusiastic. He was more than happy to go through a brief lesson of anatomy with the cadaver, and then allowed us to touch and explore on our own.The upper classmen taught Sarah (a sophomore) and Javi (our interpreter) how to put on sterile gloves. 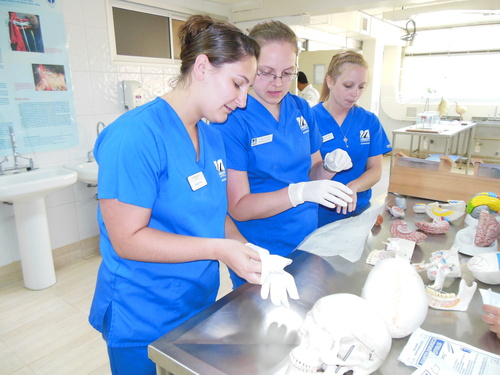 On Sunday we packed our bags to begin our departure from Santiago to Talca. After spending a few days in a developed city we were eager to experience a developing community in Chile.

We liked Santiago, and there were differences, but it felt like a city from home. Although we were experiencing a lot of cultural aspects of Chile our hearts yearned for a community in need. Before leaving the USA we spoke so much about the destruction that remained from the earthquake in 2010, however, for the most part Santiago was rebuilt and we did not truly see any remaining aftermath of the earthquake.

After our 3 and a half hour bus ride we were more than thrilled to stretch our legs and explore the community of Talca. Leaving the bus terminal was an eye opening experience. Right away we saw a difference in the economic status of the citizens. The people of Talca were no longer dressed in suits and business attire but rather everyday, blue collar working clothes. The buildings were smaller, and more simple, but there is a bit of wealth throughout the town.

We checked into the hotel we discovered it was far less lavish and the residents of Talca are more welcoming and friendly. After we unpacked we went on an adventure to find it first traditional Chilean meal. What was supposed to be a 15 minute walk, became an hour and 45 minutes. To be honest the extra long walk was definitely worth it. The walk gave us an incredible opportunity to observe the development of a town.

There were numerous homes and businesses with large cracks in the foundations, destroyed roofs, broken windows,and completely crumbled walls. The destruction was heart breaking. As we continued to walk we saw some incredibly poor homes hidden along the riverbank. At one point we saw a bridge that an entire section had fallen, but in the other direction there was a beautiful river, glorious mountains, and people celebrating.

These people know how to cherish life and be grateful that they are alive. They were more than happy to give us directions even if they were not accurate on the time it would take to get there. The road that led to the restaurant was an old dirt road compared to the cement sides walks we had been traveling on. We were told we needed to travel up the narrow hill that had no side walks and quite a bit of traffic. We asked yet another local and they told us we climbed this hill for nothing, because the restaurant was on the bottom of the hill next to the riverbank. We FINALLY made it to the restaurant and enjoyed an amazing traditional Chilean meal.

Instead of another adventure back we called a taxi so we did not half to walk in the dark. Overall our first day in Talca was overwhelming, but good. I truly made us appreciate all of the amenities we have at home.

Another nursing adventure begins with a trip to Chile.

I am again supervising a group of undergraduate nursing students on a global heatlh experience. This year we have chosen Chile. I am traveling with 7 nursing students and one interpreter/liaison. We have a few students who have some Spanish proficiency so that is helpful. Learning to speak Spanish is on my bucket list so maybe I will get closer to that goal after this trip. I titled this entry compare and contrast because of some of the differences in this trip compared to previous trips.

On this excursion we will be working at a hospital in Talca on an inpatient psych unit. This will be an incredible experience for the students, but the community nurse in me wants them to also see the aspects of community health and public health so they will be doing additional assignments related to some of these areas. We are not bringing large boxes of supplies to deliver to clinics or orphanages and the experience of dealing with large boxes, transportation and airline travel has been avoided on this trip.

We had an uneventful flight. I was surprised that when I arrived at Logan that many of the students had already checked in and were patiently awaiting the arrival of the whole group. Only one parent came to Logan, which surprised me at first, but then I realized that I am traveling with a very travel savvy group. I remember the large group that has met in Logan in the past with some tears and hugs and nervous good byes. As we navigated the airport and subsequent transfer at Miami Iwas impressed with the maturity of this group.
We arrived at Santiago very early this morning and I was pleasantlysurprisedby the cleanliness and efficiency of the airport. We transferred to our hotel, which is a complex of three large towers comprised of small apartments in the Centro section of Santiago. We were unable to check in this early so after dropping off our bags we proceeded to explore the city a bit. Mostof us are functioning on few hours of sleep on the plane but we have no choice but to keep our feet moving.
My surprise this trip was that in my 3 trips to Africa I never saw an elephant, giraffe or tiger. Well today I saw that and much more. We spent a few hours at Parque Metropolitan de Santiago. A great day. We had some lunch at SchopDogs, which featured a mix of Chilean and slightly German fare. Lots of options for food and shopping, which is a contrast to the poverty stricken landscape of Ghana thatgreetedme every day on previous trips.
My goal is to work on helping the students to see the aspects of health even in a beautiful country like Chile. They have assignments to work on and I am pointing out areas of interest like air pollution, water and land pollution (in some areas), but also the cleanliness of other areas and the lack of obesity of very obvious chronic diseases.
We did recall the words of Dr. Deidra Murphy who reminded us to look at the physical barriers that exist for people with disabilities and we did see some of that today at the zoo and other areas. The traffic is busy, but not the chaos of Accra and cars and pedestrians seem to obey the signs and crosswalk signals.
This is just the first day of our journey but already I am a bit less worried about survival and concentrating more on providing a great experience for these students.
I hope the students will also be able to give you a glimpse of their view of this experience. Please check back and read more…