Before coming to Cuba my thoughts about sex and the LGBT community in the country were based off what I read about other countries in the Caribbean. Not much discussion on safe sex practices, and prevalent homophobia and transphobia were my expectations. That was until our group visited CENSEX, the Cuban National Center for Sex Education. CENSEX is an organization advocating to teach safe sex practices and provide reproductive services to all Cubans whether they be gay, straight, bi, cisgender, or transgender. For instance they provide free condoms, and other reproductive services for the Cuban people. Listening to the spokesperson for CENSEX I found all of my preconceptions and blanket statements I had made about Cuba blown out of the water. In Cuba the government will provide free surgery for those seeking gender reaffirming surgery, and CENSEX works with trans individuals to help them find jobs where the work environment is not hostile to their gender identity. Additionally the spokesperson told us how marriage equality might be coming to Cuba soon with a referendum set for February.

Although she did concede that Cuba was not perfect and homophobia and transphobia were still problems, the fact that there was a whole organization set up to help LGBT Cubans was above and beyond what I expected. Later when we were allowed to explore the building for a bit I noticed portraits of trans women on display. In the United States that kind of positive visibility of trans women is not something I’m used to. It was a beautiful moment for me to see people that could be shunned in society being put on display through these beautiful portraits. 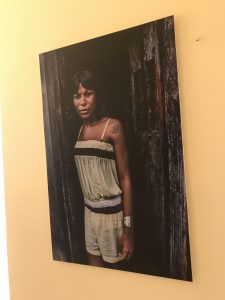 After lunch our guide Ana Elena took us to El Museo de Revolución, or the Museum of the Revolution. Going into this museum I knew I might learn something new or different about the Cuban Revolution, but I didn’t realize how differently Americans and Cubans view our shared history, or how that would hit me emotionally.

Set in the old president’s palace, Cuba’s history of revolution was evident throughout the building. There were even bullet holes still left in the marble from a previous attack of students against the then president Fulgencio Batista. Walking through the museum I was struck by the grandeur of the former palace with its beautiful artwork, and marble pillars. Continuing through the museum I began to read the exhibits, and the information they presented about the revolution. For instance, after the revolution there was a subsequent mass migration of Cubans off the island, with the United States leading many of the programs. In the United States I had been taught children were fleeing the island through the Peter Pan Program due to their home becoming unsafe. However, in this museum the Peter Pan Program was described as a way the United States separated Cuban children from their families. Reading that was jarring to me on an emotional level. Realizing how different two countries could view the same event in history was never something I considered had real world implications.

This jarred feeling carried with me to outside the museum, where our guide showed us the 1962 display of a crashed U-2 spy plane that American Rudolf Anderson had piloted, and been shot down and killed in. The Cuban government refused to hand over Anderson’s body until the American government admitted to sending a spy plane to Cuba. For years neither government would budge, and Anderson’s body was kept in a morgue in Cuba. It was after this story that our guide Ana Elena said, “Your country has its problems, and my country has its problems too. I’m sure you can understand that despite its problems, I still love this country with all my heart as I’m sure all of you do too”. It struck me in that moment that even though our perception of history was disparate, and our countries might seem incredibly different at first glance, that we still shared the same pride for our respective countries. 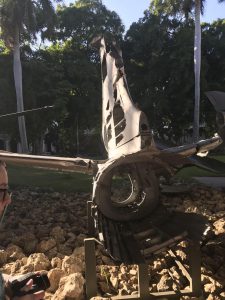 Coming back from Cuba, this lesson has stuck with me. Often, we are taught the world is so much different from our own life in the United States, and in many ways it is. However, that pride for the place you call home, at least in Cuba, doesn’t seem all that different. 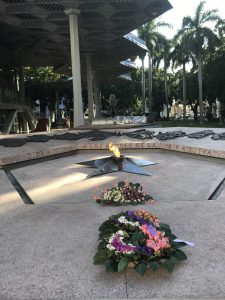