What would happen if you took 13 random college students of various backgrounds and interests and dropped them in a city that none have been to before with scarce knowledge of the culture and few who speak the language? The answer to that is having one of the greatest learning in experiences there is. Too often we forget how big the world is, that there’s more to life than work and school and tat things are done in ways that we as Americans are used to.

At the beginning of the three weeks we started out as strangers, many of whom have yet to leave even North America but after the first week we could all consider each other friends. It started on the first night where those who had arrived at the same time went out and had our first meal as a group. It was here that the that the unyielding craving to indulge in the amazing and unique foreign food was born and the discovery of the refreshing drink of the summer was shared; as well as the first of many explorations through the winding city and view of the beautiful beaches.

The next ay was the beginning of classes where each of us started or continued to grow our knowledge of the Spanish language in addition to getting first hand insight into the local culture, customs, and things to do from the teachers who, for the most part, were locals and have called San Sebastián their home for many years. Here many laughs would be shared with people who have come from many parts of the world to learn alongside us. The tour afterwards was a good introduction to the city and it many parts an posssibilitits. We had an aerial view of the city and a stunning view of the ocean and three beaches the next day from atop monte igueldo where we shared churros and took a ride on one the oldest, still operational roller coasters in the world, Montaña Suiza.

The group got to know eachother better over the next two days when we feasted upon various basque foods on our expertly led pintxo tasting tour. We discovered and tried foods that were both local and historical such as the infamous basque cheese cake and tortilla, as well as new foods like pig’s ear, peppers stuffed with squid and ink, and beef cheek. The information about the city and foods in addition to determining what each of us liked and disliked was well timed as thursdays is pintxo pote, a tradition in San Sebastián where, starting at 7:30, many bars and restaurants in old town offer a deal of one pintxo and a small drink for extremely cheap. The idea is to go to many places, which gets people together and gives business to the bars. It was a lot of fun, running around the city with friends enjoying the food and drinks without breaking the bank. The first week concluded with the daytime to the Txakoli winery where we could see firsthand how and where the wine was made, and got to try some with cheese and chorizo. 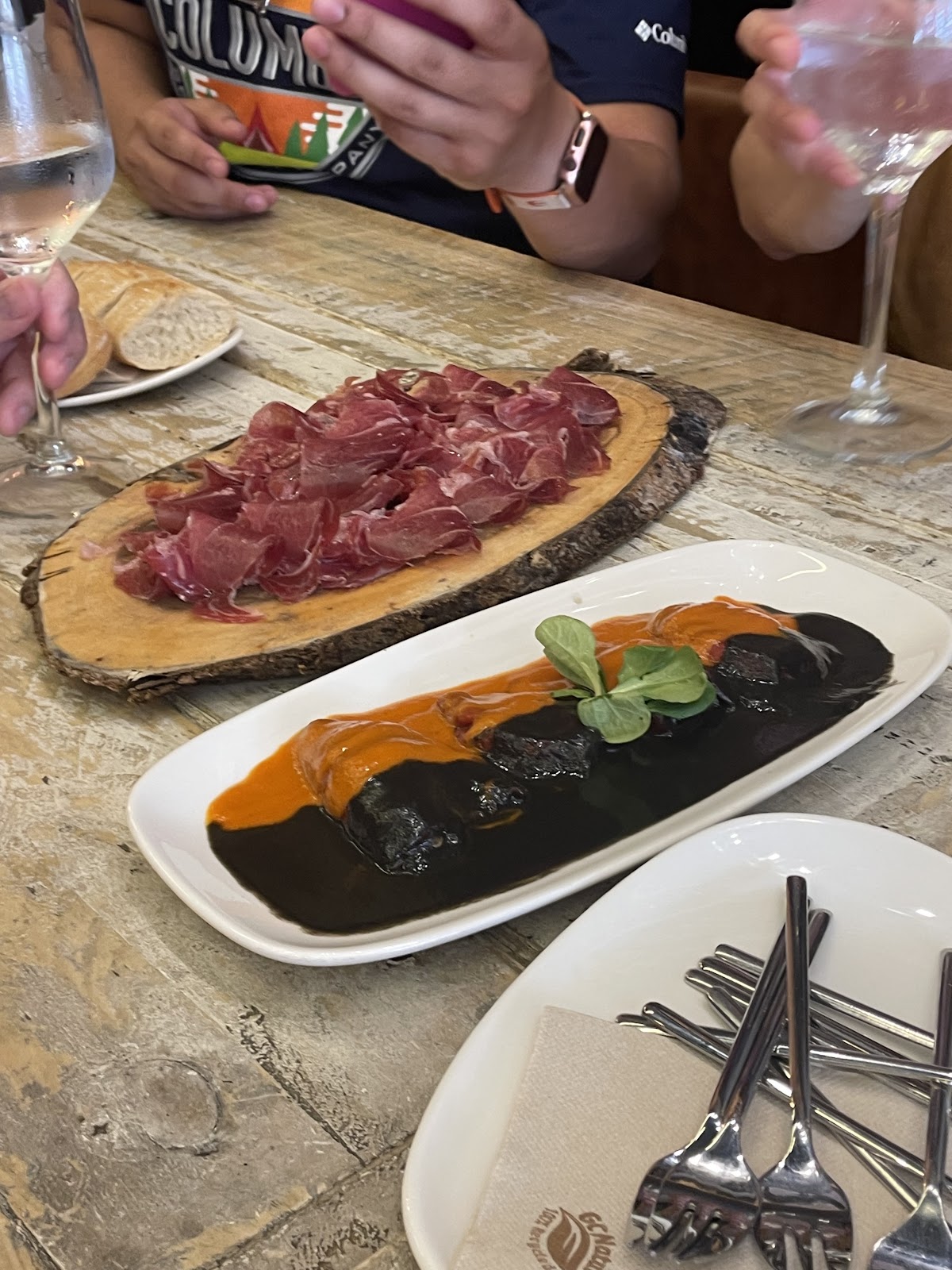 The first week set the pace for the rest of the weeks and it was clear by the Friday of the wine tasting tour everyone had gotten to know everyone else pretty well which made for more fun and excitement (and plenty of jokes) among the newfound friendships. The rest of the trip was largely the same; go to class, eat, then explore a different part of the city or have a relaxing day on the beach with various activities sprinkled in that gave a greater understanding of basque life such as jai alai and the basque language class. It wouldn’t be a school trip if not for a little bit of pain and suffering though. We went on two long walks up very uneven terrain in in the hot sun, one up to matako gaztelua, the large statue of jesus where we met Amati Buckley and discussed her basque cookbook, and the other on Santa Clara island were we took the basque language class and got slow roasted in the sun. One of the last major events was the free weekend where the guys explored the historic city of Bordeaux and the ladies did the same in Madrid.

The trip culminated at the farewell dinner. Feelings of both woe and glee emanating from everyone. There was great sadness that we were leaving the beautiful city of San Sebastián and that most of us wouldn’t be seeing each other until the academic year started in the fall. But there was much more joy shared as we reminisced about the amazing experiences we had, the good, the bad, and the unusual, but it was all for the experience non the less and we enjoyed the foods we had learned to love over the past weeks. None of us will forget this trip, the people we met, the friends we made, and the experiences we shared.