The activities of July 13th saw two distinct excursions, the first being a visit to the Basque city of Guernica. Guernica, infamously known for the bombing attack it suffered on the 26th of April 1937, is most definitely one of the most beautiful and historic locations in the Basque Country. To begin our experience in the city, Professor Zabalbeascoa gave us a brief explanation of the city’s history and introduced us to the monuments of Jose Antonio Aguirre and George L. Steer. Aguirre, an activist for the Basque nationalist party, is held in high regard for his defense of the Basque Country during the Spanish Civil War while Steer is for his report and book on the bombing of Guernica. The bombing of the city, as part of Francisco Franco ́s plan to capture Bilbao and northern Spain for the Spanish Nationalists, is an example of innocence suffering at the hands of war, as it is believed that hundreds of civilians died that day. The Spanish Nationalists denied its involvement in the matter, but Steer ́s first hand report on the bombing revealed the truth about what had happened. Seeing the city pay homage to these two figures speaks levels about what the Basque value and appreciate regarding their history and independent pride.

The group then proceeded to take a tour of the Guernica Museum of Peace, viewing the many exhibits and artifacts from the bombing of 1937. This museum not only serves as a time capsule for the bombing, but as an opportunity to discuss and contemplate peace. The museum uses the history surrounded by the bombing of Guernica as a canvas to paint a picture of what peace truly is. At its simplest level, peace is a “positive energy deeply rooted in life,” which uses “non-violence in its battles,” to prove that “we can still change the world (Guernica Museum of Peace).” A victim of war, Guernica looks to use itself as an example of what can be appreciated and what can spawn out of such destruction: true peace.

Probably the most compelling and tragic of the exhibits in the museum was “La Casa de Begoña,” in which the group entered and were given the story of the simple citizen Begoña before and after the bombing. With stunning visuals and sounds to immerse yourself into her home and life before and after the destruction of the city, this exhibit truly put into perspective the personal and monumental devastation the bombing had on the people of Guernica.

We then visited “el Árbol de Gernika,” otherwise known as the tree of Guernica. We witnessed both the old trunk of the old tree and the new tree, a symbol of Basque freedom that prevailed through the bombings by the Spanish nationalists. It is easy to see why the tree is widely regarded as a manifestation of the Basque freedom and pride, as it stands strong and beautiful despite the destruction that occurred around it.

Professor Zabalbeascoa then gave us time to explore the city for ourselves, which me and a few others noted as time to eat. We grabbed pinxchos at a local restaurant and dined next to what appeared to be a contra dancing group. We ate and marveled at the wonderful show in front of us, the drums creating the rhythm for each individual to move their hands and feet to. I could not recall any reason for this showing, other than to simply celebrate the weather and company they were providing each other with, which further proves the spirit and pride of the Basque people. 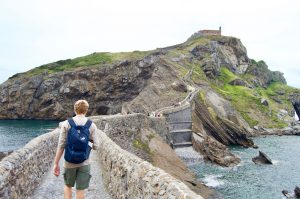 After reconveining with the others, we set out for our next adventure, the island of Gaztelugatxe. This island, even though I had never set foot on it or actually seen it for myself, already held a special place in my heart prior to the trip. Famous for being one of the set locations for HBO’s Game of Thrones, Gaztelugatxe proved to conjure much anticipation and excitement for me when I heard we would be walking to the hermitage atop it. I knew I would be ecstatic to see the location where most of Dragonstone was filmed, but actually being there and walking on the same steps that one of the world ́s most renowned stories took place was something I did not expect. Chills rolled down my back as I breathed in the salt air and watched people make the journey up the stone steps to ring the bell atop the island. The spectacle was incredible, and the journey breathtaking. Each step I took I could feel more sweat condense on my skin, and when I finally reached the top, I overlooked the island and reminded myself where I was, Dragonstone, and that made me smile. It was a day full of adventures and eye opening experiences, giving me even more stories for me to tell about my time here in the Basque Country.