I can’t think of a more enjoyable way to indulge in a culture than to enjoy its food. However, we not only got to eat traditional Spanish food yesterday, but had the privilege of learning how to make it too. The dishes we assembled are called “pintxos” and are incredibly common around San Sebastián. When strolling through La Parte Vieja or Gros, as I often do, one can pass bar, after bar, with counters laden in these delightful morsels.

On Tuesday, we made our way to Euskal-Biliera which is one of the oldest Gastronmic Societies in the city. These are extremely exclusive groups of male chefs, and women are still not allowed in many of the kitchens due to strict tradition. However, since none of the other members were present apart from the head chef and his brother-in-law, all of us were allowed to observe the preparation in the kitchen. We sat at a long table lined with the ingredients for the original pintxo, La Gilda. Pickled peppers, green olives, anchovies, and toothpicks were all we needed for this simple bite of history. The head chef demonstrated the proper order to us, and we followed suit. Although not everyone liked the taste, it was certainly meaningful to be a part of. After that, we made four more pintxos: prawns dipped in olive oil and covered in coconut, boiled octopus with peppers, onions, olive oil, salt, and lemon, jamón serrano (thinly sliced Spanish ham) with cherry tomatoes laid on toast that was rubbed with a clove of garlic and spread with a thin tomato sauce, and a roasted red pepper stuffed with a mix of chopped tuna, peppers, onions, and salt. I enjoyed each and every bite, especially the octopus. For dessert, the head chef whisked together a big bowl of mandarin gelato and Pacharan Navarro (a common Basque liquor) and ladled it into glasses for each of us.

I am glad that we were able to learn how to make these dishes in a private Gastronomic Society rather than in a typical public restaurant. Because these societies are so exclusive and traditionally based, I knew that we were learning from people who were experts in the authenticity of the food and the culture. Even today, they practice traditions that have been carried out since about 1901. When the point of this trip is to immerse ourselves in Basque culture, I think this was a very appropriate way to do so.

For the rest of the day, my friends and I enjoyed a leisurely walk around the city before the sun set close to 9:45pm. We then climbed the stairs all the way up Mount Urgull, or as we usually call it, Jesus Mountain for the statue on top. We stopped along the way to enjoy some small things nearby. The sun cast golden light on the buildings surrounding La Concha and illuminated the tall steeple of Buen Pastor Cathedral against the green rolling hills behind the city. On a terrace below the walkway, we watched two kittens play for quite some time, while rowers left the harbor. The view from the top was certainly worth the long trek up. Looking out, we could see far out across the Atlantic and the mountainous coast in the distance. I climbed the rock face even higher up the mountain where I could see farther out. The view was absolutely breathtaking and I couldn’t stop thinking about how lucky I am to be here. I thought about how experiences like this are when I am really living instead of going through the motions of predictable day to day life. Like a sunset, eating is something that happens every day. However, how often do people really take time to cherish it? Yesterday, I got to savor both the Basque cuisine and the beautiful sunset, and this memory will continue to remind me not to take anything for granted, no matter how redundant.

Here is a link to a time-lapse of the sunset: https://www.youtube.com/watch?v=RmbCl8KZKGc 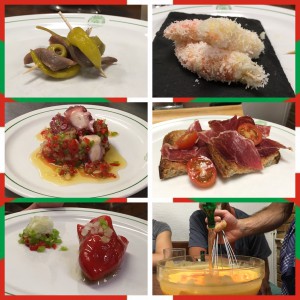 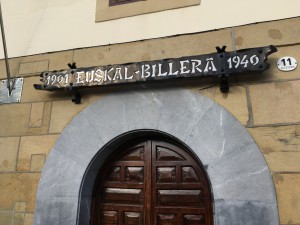 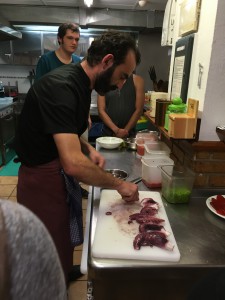