To finish our week, on July 6th we visited le Fondation Louis Vuitton. While walking by Le Bois de Boulogne and Le Jardin d’Acclimation, we stumbled upon a huge white building surrounded by trees. Once we got closer we were able to see a beautiful waterfall in the front of the building which we later got to walk next to. Once we headed up the elevator for our tour, we were stunned by the beautiful views of the city. We started our tour on the top terrace of which there were three of. Here we were told about the architecture. We were told the building is based off a boat because the boat it the symbol for Paris. The sails were made from 3600 square meters of glass and the building was constructed of steel. We learned about le Jardin d’Acclimation which was used to acclimate animals to the climate of Paris before they were sent to live in zoos. The building also represents a greenhouse because that is where they would keep the palm trees when it was too cold out. Our tour guide also pointed out that there was no grout between the tiles which is used as a way to collect water to fill the waterfall outside the building along with used to water the many plants that are present. 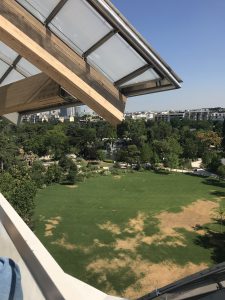 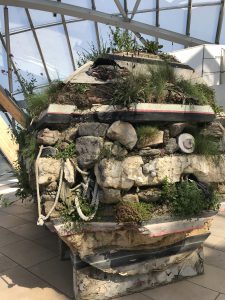 We also got to see the Takashi Murakami exhibition, who is a Japanese painter. He draws inspiration from Manga, a type of Japanese anime, and it is evident in his style. He was the artist that designed the cover of Kanye West’s 2008 album “Graduation.” One room was an entire room with the walls from ground to ceiling and all around designed by Murakami with smiling flower wallpaper. The tour guide mentioned that they look like daisies, but they are chrysanthemums, which in France are used at funerals to mourn while in Japan they are a sign of happiness. There were a number of other works of art we saw, one of my favorite being the floating volcanic rock that was being suspended about a half foot, and beneath were just a few different aquatic animals I had never seen before. I did not really understand what it meant, but it was an interesting and unique piece of art, nonetheless. 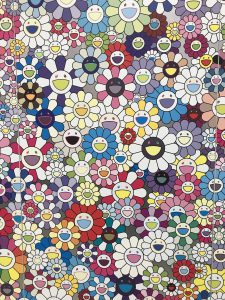 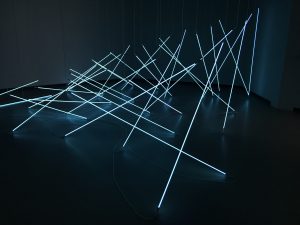 At 3pm we met at the ISA office to recharge our Navigo cards where one of the employees was nice enough to give us all France make up which were worn on our faces and arms while France played their game in the world up. After we walked to the bateaux mouches where we took a tour of the Seine which was beautiful. It was great to see the city from below on the water and see how everything connects while saving our feet from more walking. I think this was a great way to finish out the week because it was almost a wrap up of all the things we had seen during the week. 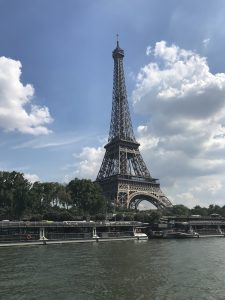 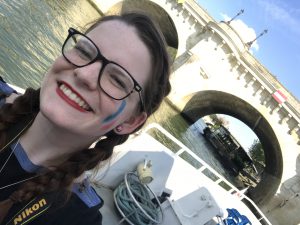 After that, Aidan, Zoe, Caroline, Jenny, and I, went to eat at a restaurant around Saint Michel. We got a quick bite of food before the soccer game had finished and luckily, we were watching the streets from above. After the match, a large group of Parisians stormed the streets, walking straight into the middle of traffic of cars because they were so proud of their victory. The crowd was so large we could feel the building slightly shaking in their march up the street! After we finished dinner, Aidan and I went to the Louvre quickly to see some of the artworks we have been dying to see. First, we saw the exposition of Eugene Delacroix. In my 8th grade classroom, my teacher had a recreation of Delacroix’s Liberty Leading the People, which he drew, hanging on the wall. I always loved this painting so when I found out that I could see it at the Louvre I was beyond excited. After the exhibition, we saw a lot of marble carvings which I find fascinating. After that, we ran to find the “Winged Victory of Samothrace” which sits on top of a beautiful set of stairs. After that, we ran to find the Mona Lisa which the French call, La Joconde. We looked at many other paintings before realizing that Vermeer’s The Astronomer was also in the Louvre. We asked for directions to it and were told it was located upstairs on the direct opposite side of the building. We rushed to get to it in time but were a few minutes late. It was okay though because even if you are rushing to get somewhere in the Louvre, on the way you see so many beautiful works, and we know we will be back again. 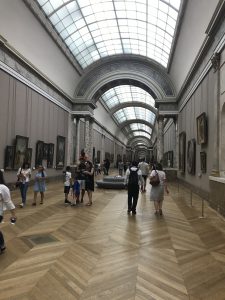 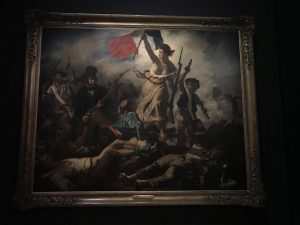 At the end of the night, Aidan and I got dinner at a café right outside of the metro stop that I go to, Alesia. There we saw a group of 11 people sitting at a table signing to each other. This was cool to see because when I was young my mom taught me sign language and it was the first time I had seen a large group signing. After we ate, I went home and that concluded our day! 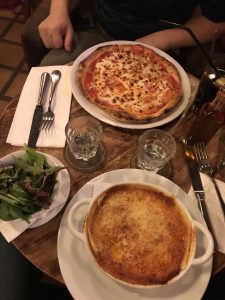