Literally, one metro stop from our dorms (“le Cité Universitaire”) lies the dark side of Paris – known simply as Les Catacombes.  While not exactly catacombs in the truest sense of the word (it’s actually an ossuary), that doesn’t mean it’s any less interesting.

For starters, Les Catacombes are an incredibly popular tourist spot.  It is not uncommon expected that you will find a long and winding line around the site during operating hours…just as I found out during our first excursion into the city.  With this in mind, I arrived extra early (8:45am) for the (10am) opening only to find myself waiting behind another 50 people who beat me there.  However, I am convinced that I saved a lot of time by coming so early, as I was in the first wave to enter (only 200 at a time are allowed in). Don’t believe me?  Take a look at this picture of the queue from the misstourist blog 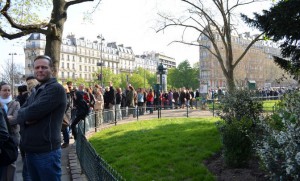 I was lucky also, to have a tour group immediately behind me, so I gained a great introduction to Les Catacombes.  So interesting, I must share:

Once you arrive at les Catacombes, you must descend 130 steps down a spiral staircase (yes, it did make me a little dizzy, actually!) and you realize that it is almost like an underground city, with “avenues” and arches, columns and art…but instead of using bricks and mortar, these walls are made with skulls and leg bones.  It is absolutely fascinating to see just how far and wide these tunnels of bones go (and to realize that every two leg bones belong to one person…it’s easy to see why there is an estimated 6.7 million skeletons placed down there).

It may be interesting to know that much care has been taken to denote which cemeteries the bones came from and when brought to the location (despite the fact that there are no indications of who the bones belonged to in the first place).  Much care, too, has been taken in creating “wall” that is not only efficient but even created with purpose (there are many arrangements created by the skulls and bones into patterns like hearts, crosses, etc.). 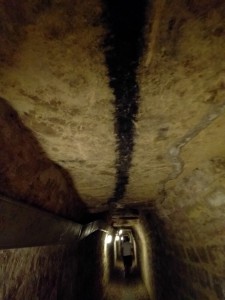 The black line on the ceiling was to direct tourists through les Catacombes (before electricity). 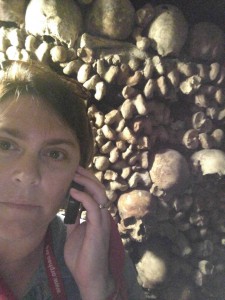 Getting a lot of great information from the audio guide. 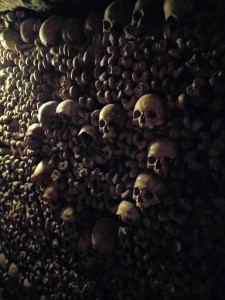 Patterns created from the bones can be seen along many of the walls, like this heart shape created out of skulls. 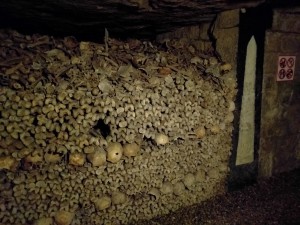 Les Catacombes are believed to house the bones of approximately 6.7 million people. 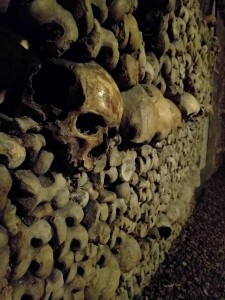 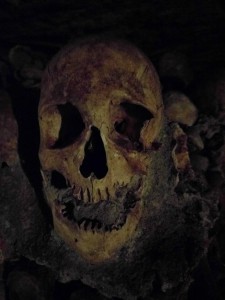 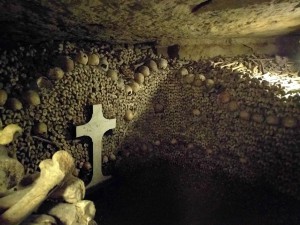 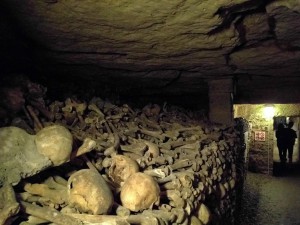 The depth of the stacked bones…. 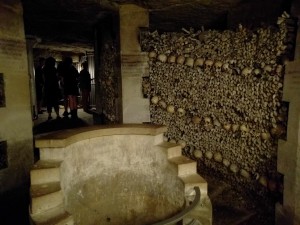 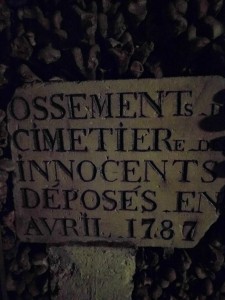 One of the first cemeteries (Les Innocents) where the bones were removed and transferred to Les Catacombes.

All in all, it was extremely interesting (I would highly advise the audio guide as well). 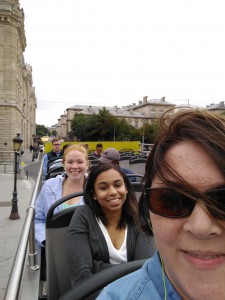 (Front to back):  Mandi, Merismar and Hannah on the double decker Paris tour bus

For starters, here’s hoping everyone back home had a terrific and safe 4th of July.

While we may be far away from home this Independence Day, our semester in Paris has started off with a “bang” (sorry, couldn’t resist  : )   )

To start our week off, we took an open bus tour of Paris (green line) where we were able to get a bird’s eye view from atop the bus of some of the most popular Paris landmarks, many of which we will be visiting personally and learning about from our professors, Dr. Carole Salmon and Prof. Jennifer Cadero-Gillette.

On our tour, over 19 landmarks were highlighted, from the Opéra, to the Louvre and Muséee d’Orsay, Champs Élysées and many more, but my favorites had to be l’Arc de Triomphe 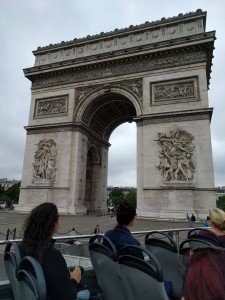 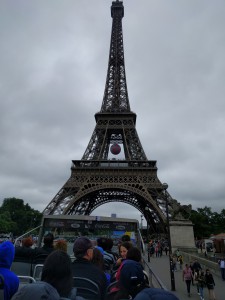 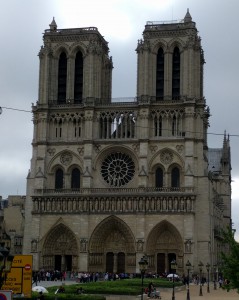 Notre Dame – at the very heart of Paris

At the completion of the bus tour, Dr. Salmon and Prof. Cadero-Gillette gave a fascinating talk about the history of Notre Dame.  We learned a lot about its innovative construction (begun in the 12th century) as well as the stories behind its relief structures. 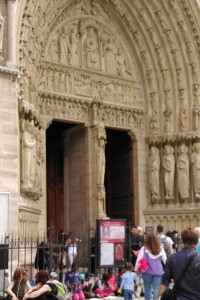 Its influence has been far reaching throughout time and continues to leave its mark even today.  For example, did you know that Notre Dame, considered the official center of Paris, contains a marker (“Kilometer Zero,”) whereby all distances measured from Paris are taken?

We concluded the day with a walking tour (complete with teaching commentary) through the Latin Quarter and the Sorbonne and completed our tour at the Panthéon.   I am excited to see what’s in store for our “class” tomorrow! 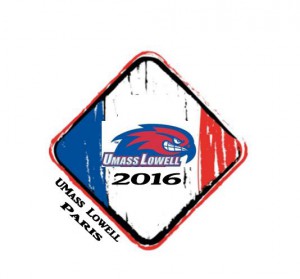 Test post…hope Rowdy doesn’t mind that I used his image.  : )