We were fortunate enough to get to spent July 14, Bastille Day, in France!

Originally we had thought we were going to miss the fireworks by the Eiffel Tower because the metro stations would close and we had no way back to the Cité Universitaire.  Being disappointed that we would miss the fireworks, we took matters into our own hands and sought out a local spot with high elevation.

We climbed to the top floor of the United States house and found that we were able to see part of the Eiffel Tower.  Excited, we gathered around to watch the show, then the director of the US House showed up.  At first we were afraid she was going to ask up to leave and we would be unable to see the fireworks.  To our surprise, she unlocked the door to the roof and suggested we go outside for an even better view.

From the roof we were able to watch five separate firework shows across Paris.  The experience was truly amazing and the view was breath taking.  The pictures below don’t do it justice. 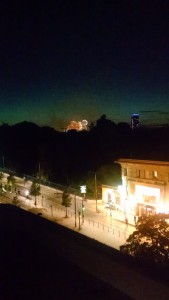 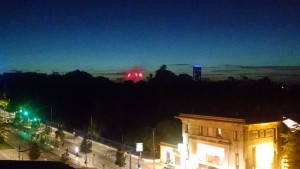