*not my own picture*

Your first night in a new place is one that will stick in your mind long after it is past, even though it is but a distant memory just a few days later. In light of this fact, it’s a shame that the first night also tends to be your most anti-climactic of your experience of a place – especially if you’ll be there for a while – leaving you with an effective impression of: This is it? How could this possibly be it? What if I just left?

(“Just kidding everybody, I’m coming home, everything’s a wash, who was I kidding right? Back to the airport, see you in the morning.”)

When you think about it, though, how could your first night in a new place not be anti-climactic? Could the wholly alien nature of moving to a new place – not to mention to a new country or different culture – ever really live up to your expectations? With vacation, you can check into the hotel, take a nap, go exploring, and head out for a nightcap before heading back to the hotel to sleep before a busy day of activity/non-activity. But in the case of moving, nothing about the experience of arrival is conducive to experiencing your new home in the proper context: you are tired, you likely have not eaten, your body is still adjusting, you miss your family and friends already. And even if you’re prepared, you’re never prepared enough.

If you are a student, the problem is likely even worse. You’ve probably only just found out where you’re going to live, and you’re likely still daunted by how you are going to afford, nevertheless get on in this new place. It’s easy to feel awash with the mixture of emotions well beyond that first day until you settle in. In other words, your first night can leave a stark impression, despite its quick fade. My first such night in Copenhagen, Denmark was one such experience, and – much as in my case – it’s easy to get off-put by the distinct and complex feelings of a first night.

The word is loneliness. On arriving to Copenhagen (København) for my first year in a new MSc program called Global Development at the University of Copenhagen, I was immediately taken by the newness of the city center, despite my having visited the city before. I confusedly sat in a Dunkin’ Donuts in Copenhagen Central Station (how New England . . .) trying to figure out after my tiring flight how I would arrive to my new, and temporary, accommodation in the Valby neighborhood of Copenhaegn, about 7 kilometers west of the city center.

(An observation: What they don’t ever tell you about when preparing to travel is the “Wi-Fi shuffle,” as I have termed it, that incessant non-stop shuffle of the unprepared traveler at a new destination to secure reliable Wi-Fi and find out where you are – how you are getting somewhere – what you are supposed to do when you get there. It hasn’t stopped as I write this, as I frantically try to get my phone unlocked through AT&T so that I can actually not get lost twice per day. A distinctly Millennial problem, but I digress.)

Upon finally messaging my new roommate/landlord/temporary two-month benefactor of a room that isn’t a box on the street, I managed to stand around helplessly outside for about twenty minutes and get on a bus on what I think is the right route (I’m of course too proud to ask for directions). Naturally, I got off at the wrong stop, walked a kilometer (ahem) and a half  to my new accommodation with two large suitcases in tow because I’m too poor/cheap/confused to order transportation, and finally managed to ring the door, sweating through and having not showered over 24 hours. (Once you reach minute fifteen of walking with two rather heavy suitcases with confusing foreigners staring at you with various levels of intensity, you definitely want to call it a day. All you want to do is brush your teeth and nap, even though your inclinations are telling you to explore the city.) 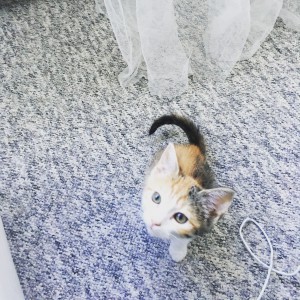 My apartment has a kitten!

Settling in had a very familiar feeling, not dissimilar to when I went on an abroad program to Queen’s University in Northern Ireland. Once you finally stop unpacking, all you want to do is finally explore the city, which usually entails buying food and passing out several hours later because you are too exhausted. When walking around that first night, you are struck by the fact that you really do not know anybody. This is obvious, of course; but you definitely feel it. You are acutely aware of how different everything is, possibly in spite of all the similarities (there are many between Copenhagen and any other part of the city). The small things stick out to you the most, and they certainly did to me on that first night. The academic term is “culture shock” and it takes a, sometimes long process of acclimatization to overcome, but I don’t think that’s what that was exactly. I think that’s what will happen in a few months when I don’t know how to find a new place to live and am finally really missing my family and friends. It takes a while to settle into everything, and while it will never feel like home, it will do its closest approximation.

So, the first week is exciting, but the first night is downright lonely.

For me on that first night, the travel and the headache struck me on my first venture into a Danish grocery store. I quickly found out, in time to buy just coffee, milk and Corn Flakes, that the grocery store closes at 8. At which point I proceeded to a pizza shop and navigated ordering a weird chicken sandwich that wasn’t exactly what I had in mind, but it would do. As I carried that lonely chicken sandwich and my large, sad box of Corn Flakes back to my apartment, I was stuck by the differences between my section of the city, Valby – a close approximation of Lowell where I studied for my undergraduate degree – and the city center – a gloomier, more Victorian approximation of Boston. I wondered very seriously what I was doing with my life.

Back in my room, I sat in the half-furnished room and ate that sandwich before falling asleep on a pile of my own things and waking up with one of the worst headaches of my life just three hours later. What followed for the next night was, as a non-insomniac, one of the worst nights sleep I have received. Perhaps it was the travel but almost certainly it was the food, and next thing I know I am back and forth between the bathroom and my headache-handicapped stupor on my couch-bed for the duration of the night, using both ends of my body multiple times (I’ll spare you the finer details).

As someone who never gets sick, at least not in this way, this is alarming. But once I got through the night I realized that, as with anything, it’s not all that bad. I cannot begin to describe the loneliness of that night, though, not so much a sadness as a hollowness while you anticipate all that is (hopefully) to come. In many ways, I am grateful for nights like that at the beginning of the trip because I knew the journey would only get better from there. The next morning, I miraculously woke up on time for my course introduction, managed a long walk into the city, and somehow functioned for the next sixteen hours as I realized how quickly things can improve.

You never really get over the loneliness of that first night, or, rather, you never forget it. Having moved several times and traveled somewhat widely, this will be one that sticks with me. It makes every night thereafter that much better, which is certainly the case for me in this first week here in Copenhagen. As I sat next to the lake on my beautiful first day in Copenhagen drinking a beer with some of my classmates (which you’re totally allowed to do in public over here), I realized that the first night doesn’t matter, even though you think it does; it’s the first full day that counts. 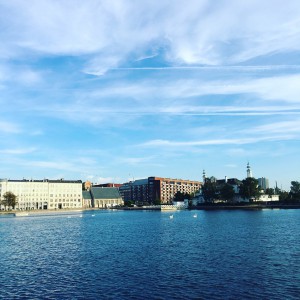 The lakes look beautiful but they’re artificial. Really shallow and actually kind of gross when you get close (but hey).

Stay tuned for stories about cycling, graduate school, and the endless sea of conformity and cheap pleasure that is IKEA.

One thought on “On Loneliness”