I want to start this by introducing myself. My name is Aaron and I’m a senior mechanical engineering student, set to complete my degree in the fall. My goal for this trip was to have new experiences, try new things, make new friends, and experience Spanish culture. I met those goals and exceeded them by more than I could have imagined. I am so glad I get to tell you about it.

The day of our flight to Madrid was filled with excitement. I left for the airport with my friend and Roommate Charlie. Getting through security took no time at all and we were sitting there wondering what to do with our time. Luckily it didn’t take long to spot our fellow UML students and we quickly got to talking. Everyone was wonderful and soon we all boarded the flight together. After landing and arriving at our hotel, we quickly we decided to go out and explore. It didn’t take long for us to find ourselves in Gran Via, where the street was closed off for a speed-walking race that was supposedly a tryout for the Olympics. We watched that for a while as it was very amusing before proceeding to what must be the world’s fanciest Primark. The store has four floors, I bought sandals, swim trunks and $3 cologne (it smelled fine, but it was very weak). At this point we were all directed to an orientation where we got metro cards and were given a dinner to end the night.

Day 2 was our first full day in Madrid. It started out well, we all managed to get out of bed on time and make it down to meet in the lobby of our hotel. The day’s itinerary included only a Spanish style cooking class. Quickly, we boarded the metro with the cards we’d been given the previous day and began on our way. From exiting the metro, it was a short walk to the cooking class. There we were informed, we would be making a cake, a paella, and gazpacho. Paella is a Spanish dish consisting of rice, veggies, and seafood. I personally partook in dicing red peppers for the paella and, decorating a cake. After the cooking class we were free to do as we pleased for the remainder of the day. We all split up into groups, I headed with Cole and Charlie to explore Madrid. We started at a free exhibit. While cool it was a very small exhibit and offered just a taste of what was to come. From there we chose to head to the Thyssen museum. The Thyssen museum turned out to give me a wonderful impression of the city.

After leaving the museum we decided to look for the crystal palace and garden. We bumped into some other students from our trip and proceeded into the garden together. We saw some cool flowers, trees, and vases before arriving at the crystal palace. The palace was a cool sight, and we snapped some fun photos. I appreciated getting to know everyone before we headed back to our hotel.

Day 3 began with a day trip to Segovia. The bus ride there was around an hour. I couldn’t sleep on the bus; I was too busy looking at the natural beauty of the landscape and the architecture passing by. Out the window to the left I spotted what I knew had to be the Valley of the Fallen which we would visit later in the week. As soon as I arrived, I saw an unexpected sight, what lay before me in all its’ enormity was a Roman aqueduct. Upon exiting the bus, we strode right beneath the aqueduct to meet our tour guide directly below it. The tour guide soon confirmed this was a roman aqueduct built in the second century AD. It took the Romans around 20 years to build the aqueduct which continued to carry water to the palace until the year 1929. From there our tour of Segovia started by walking towards the castle. Seeing a real castle with its furnishings preserved was a very cool experience, as was learning its history 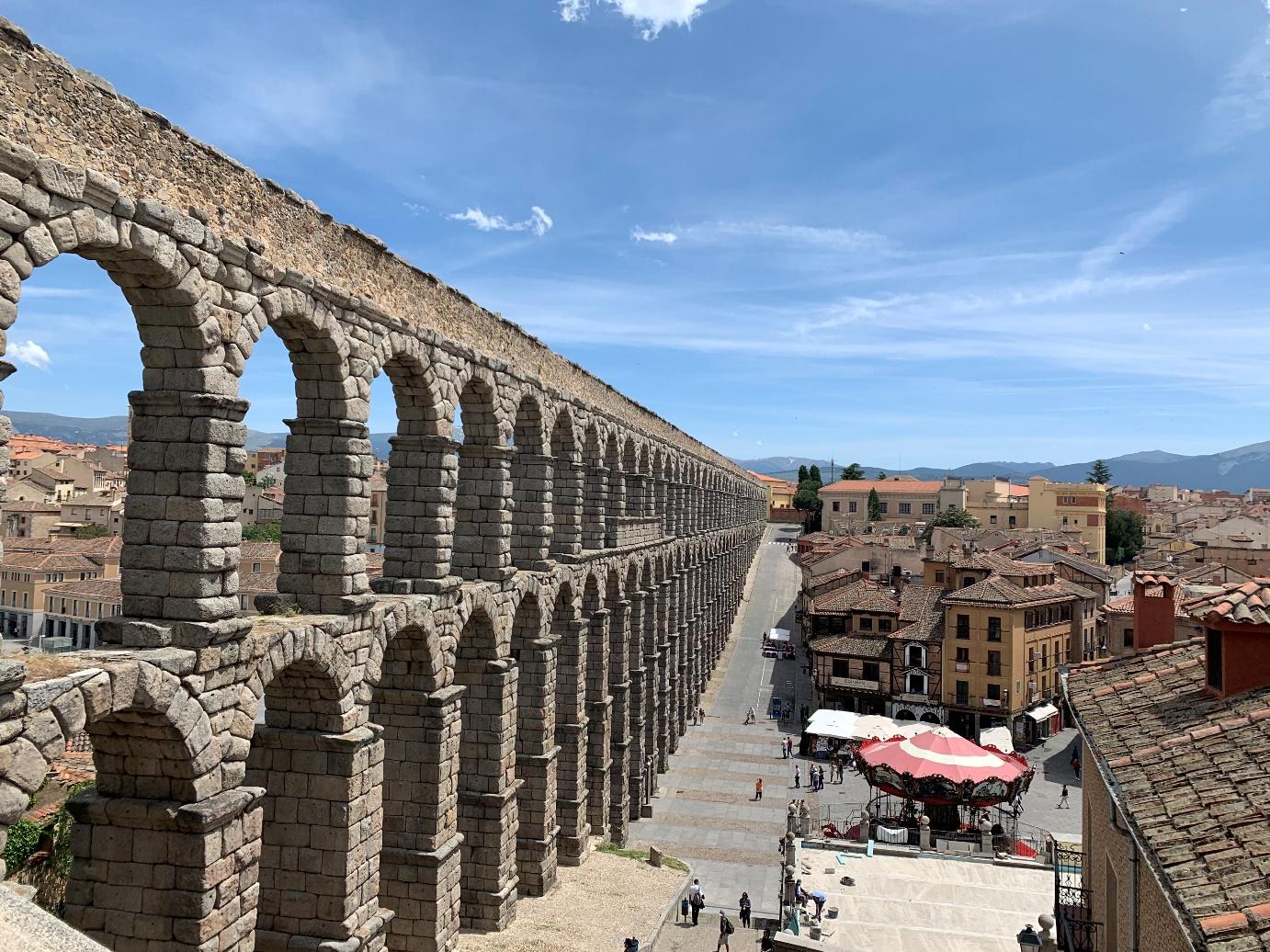 Day 4 started with a guided tour of Madrid; we visited some cool sites that I would return to later. Before leaving for the trip, we had presented PowerPoints in groups about a certain neighborhood that we were required to visit while there. I chose the Chueca neighborhood, which I took the opportunity to visit following the tour. In Chueca I visited the market and ate at a rooftop restaurant. Before leaving I made sure to grab a cool pair of socks. After Chueca came our scheduled visit to get Chocolate with Churros. The food consisted of thick melted chocolate together with churros. However, it was so good, we kept asking for more. We ended up adding chocolate ice cream as well. By the end I was completely stuffed.

Day 5 was our second day trip, this time to the Valley of the Fallen. A monument built by general Franco to honor and house the bodies of the soldiers who fought on the fascist side in the Spanish civil war. The monument was built using labor from republican prisoners of war, thousands of who died in its construction. I felt very uncomfortable being inside a monument so overtly dedicated to fascism. One part of me felt I was defying the monument simply by standing in it. Another part of me couldn’t wait to get out of it. Soon enough we left, took some cool pictures in front of it and we were on our way back to Madrid. After arriving back in Madrid, several fellow students and I decided to go visit an observation tower. Once at the top, the view was well worth it. From the tower we could see nearly all of Madrid and well past that to the surrounding country and mountains. Directly beneath us was a university we had passed on our way there. It was small for a university in my opinion, but I’m unsure how undergraduate education works in Spain. From the tower, we could also see Casa de Campo, Madrid’s analog to Central Park, the difference being it’s not central and it’s around 5 times the size. Before this I had not truly understood just how big the park is. It’s enormous, large enough to be a town in and of itself and it’s a beautiful natural wonder inside of the city. Upon seeing the park, I was immediately saddened that I would not have time to visit. Also, from the tower we could see the interesting architecture of Madrid. The royal palace and neighboring cathedral were on display. After leaving the lighthouse Stephanie, a fellow student suggested we go to the cable cars that traveled above the city. While initially reluctant as we’d just gotten a plenty nice view, I’m glad that I listened. The cable cars took us directly into Casa de Campo. Turns out I got to visit after all, and this was by far my favorite part of Madrid. The trees there were the variety I thought only existed in the Serengeti, and the park was very natural feeling, full of hills and outcroppings that were incredibly fun to explore. I hope to return there one day with a mountain bike. Thoroughly exhausted, I went to get Tapas before proceeding to the world’s oldest certified restaurant, a spot Hemmingway ate at. There I ate the head of a baby pig and got a live Mariachi band performance. This was overall the most exciting day of my trip, and I still cannot believe how many things I managed to pack into a single day.

Day 6 began with another guided tour of Madrid. The subject of this tour was the civil war. We visited the spot where some fighting took place early in the war and got an amazing view of the royal palace. From there we proceeded on to get food. I got the best tortilla I’d ever had in my life at La Buha. After that I visited the Prado Museum. The Prado is definitely the flagship museum of the city. Housing famous paintings including the black paintings by Goya. Seeing Saturn devouring his son was something I’d looked forward to. The way the exhibit was set up, displaying all the paintings in a dark room with the accompanying descriptions describing where they were found in Goya’s home painted its own creepy picture of the last years of Goya’s life. After the Prado, I visited the Reina Sofía Museum with Cole. At first, we thought we’d arrived too late, and we settled for getting gelato. However, after seeing the line continuing to form, we decided it must still be open. Inside the museum we got to see Guernica, a moving painting by Picasso depicting the bombing of the city of the city of the same name. We also saw The Great Masturbator, a strange work by Dali.

Day 7 began with a guided tour of the Las Ventas bullfighting stadium. The stadium was spectacularly huge. Inside we learned about the bullfights, and a couple students; Oliver, and Kelsey, along with our API attendant Alicia got to try a virtual reality bullfight. At the end of the tour was a museum about the history of bullfighting. After the tour ended many of us went to buy bullfighting tickets for that night. I knew to expect the torture and murder of the bulls, I however still could not comprehend the brutality of it until I saw it for myself. The tour operator of the stadium had described how the matador’s aim to strike the bull with a sword in a very specific coin sized spot that leaves it dead in five seconds. None of the matadors hit their mark, the deaths were slow and brutal. I would have been comfortable saying this even before the fight, but after witnessing it I will happily affirm I condemn the sport.

Day 8 began with a guided tour of the royal palace. The royal palace was truly grand, and I particularly enjoyed the Apotheosis of Hercules ceiling painting. The history of the palace and the country’s rulers was fascinating, and I enjoyed the history lesson. After our tour, I went to get some food and check out some other archeological sites. That night we enjoyed a farewell dinner hosted by API before going home. I went out once more after to see the city one more time and get ice cream. I knew I’d miss Madrid, and that I’d never get to have another experience like this. I wish it could have lasted forever.