Day 4 was the first day I finally got into the right sleeping pattern and woke up for the day rested and ready to go. unfortunately, it was raining out and I hadn’t brought my raincoat or umbrella so hoped from awning to underpass until getting to the Design Museum. The museum had opened up in 2002 and was very up to date with their collection of computers and other electronics on the latest models. There were a lot of cool installations there inducing one called making memoirs which was about building being and already built that have to do with something in history. Thwholele exhibit went into details about what the building was representing and how certain part of the building where directly attached to parts of history or the culture they were made for. After we all made our way to the Victoria and Albert Museum. There where 2 exhibitions advertised there, the Dior exhibition which was sold out and the video game exhibition which was closed. The most interesting room in the museum was the plaster room of famous statures like a Lifesize cast of Michelangelo’s David and the column of Trajan. There where other casts but those are the two that stood out. 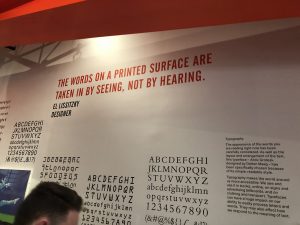