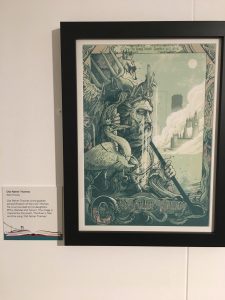 On Sunday, March 10th we went to the Transportation Museum and there happened to be a poster show of artists portraying a story that revolves around London, fiction or reality. It was very interesting to read all the stories of London and random legends that came with the posters. One poster was of a lone woman at a tube stop and when you read more into the poster you found out she was a ghost, and that there was a legend about a blonde ghost at the tube stop. Another poster was just a simple image of a couple sharing a moment on the London Eye and I thought that was an interesting way to see a story, such a small one but meaningful to that couple. My favorite poster was called, ‘Old Father Thames’ by Alex Hovey and it shows Old Father Thames and his daughters in London. I really liked this poster because it’s all one color in different shades. It looks like a very intricate pencil drawing and that really brought me closer to the piece. I also liked the historical and mythology side of it too. In the caption it says the poster is based off a poem called ‘The River’s Tale’ and the song ‘Old Father Thames’. In the song it says “Kingdoms my come, kingdoms may go Whatever the end may be Old Father Thames keeps rolling along Down to the mighty sea” which seems to match the poster because he is definitely rolling down the Thames. The poem is also about the hearty people of London and how many people have taken over and how they have always been around just like the Thames. I just really liked this poster because of the historical and whimsical design and the mythological aspect just made it that much more interesting. So far my time in London has been amazing and I look forward to exploring more museums and way finding systems in the future week. 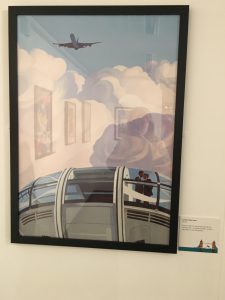